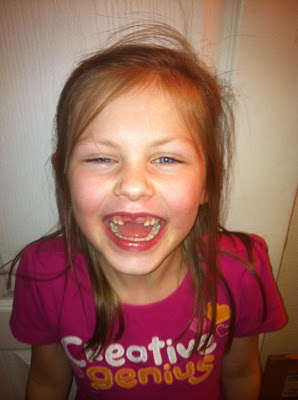 So, basically it has just been a tooth-losing festival around here. Josie lost two teeth last year, and then she told us that she had a loose one back in February. Well, let me tell you, those suckers seem to like to hold on, because she will have a loose tooth for months, and then it will finally come out! The nice part is that her new teeth seem to come in very quickly, though.
Anyway, Saturday before last, she had her dad pull out one that was hanging by a thread. The "tooth fairy" (see my previous post for why we do the tooth fairy, but no other make-believe creatures!) was negligent and she received no recognition for that one.
Then, last Saturday, she had another one that was very wiggly. She has really gotten to where she likes her dad to pull them out-she even told us she likes having no teeth! He quickly removed it (I don't do tooth wiggling or pulling! For some reason that makes me exceptionally squeamish-I think it has to do with my irrational fear of losing my own teeth) and she was determined that the tooth fairy owed her something for this one.

So she wrote this note (please excuse the horrible spelling-she is learning, but stubborn thing refuses to do it right except during school): 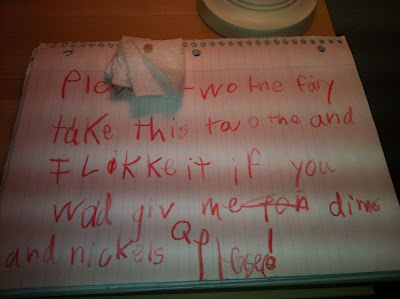 Just in case you don't read "Josie" fluently, it reads: Please tooth fairy, take this tooth and I like it if you would give me dimes and nickels. Please! (By the way, "Q" stands for quarters, she said, I guess she must have an agreement with the 'Fairy to read her shorthand. Also, the tissue wad is a "pillow" for her tooth-so it wouldn't get lost. If you like to be grossed out, you can enlarge the photo and you can actually see her tooth on there.)

So, what's a mom, ahem, Tooth Fairy to do? After such a pleading note, and also the horror of the previous forgotten tooth, I knew I better make up for it post haste. 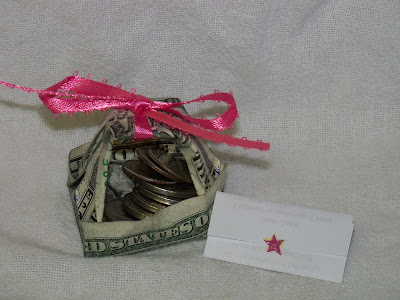 Ta-da! I shamelessly stole this adorable idea. I folded a dollar bill into a "basket" and then using size 6 font, typed up the tiniest note ever. If you wonder why my basket is not as neat as her's there are two reasons: 1. I did not have any crisp dollar bills. I was ill-prepared for this tooth fairy business! 2. It was 10:30pm, and I was watching the YouTube video on how to fold it on my phone-by the way, YouTube does not orient horizontally if you access if from Pinterest- making the whole venture that much more difficult! 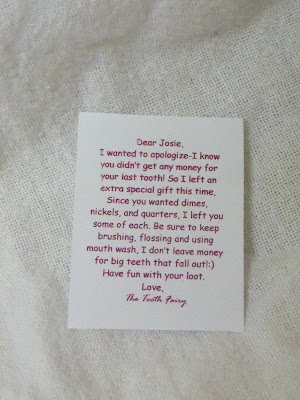 I also included my own little note. I have seen a number of tooth fairy notes that include admonitions to brush, floss, etc. and I decided that was not a bad idea. I liberally sprayed both the note and basket with the glitter hairspray I used the first time, and the generous sprinkling of "fairy dust" was well-received! I filled up the basket with a dollar's worth of quarters, dimes and nickels (She is filling an old Crown Financial savings book my mom gave her, and it has slots for all the change, hence the request for coins.) Overall it was a huge success. I am not sure how I will top this one, as she has many more teeth to lose and I am out of Pinterest inspiration!;) 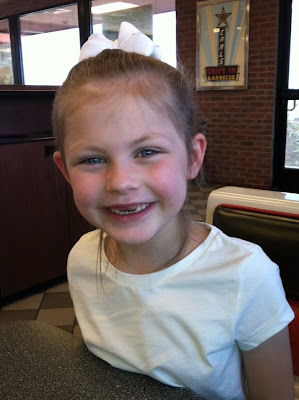 Here is a better "after" shot. She is such a cutie- which isn't something that most people with two missing teeth can claim! I hope those new ones hurry in, because she is already telling me that there are more loose ones. I am thinking I better brush up my origami skills a little more!

Contemplated by Clare at 9:42 PM