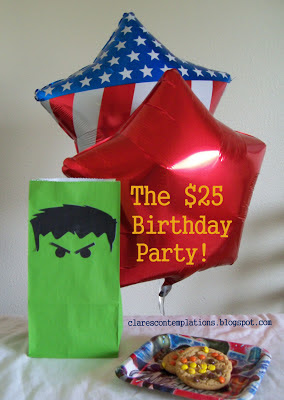 My mom established a great tradition for my siblings and me while we were growing up. We were only allowed to have a birthday "party" every other year. Of course, we celebrated every birthday, but inviting friends, and party favors and themes, that was only once every two years. It saved my mom from the trauma of throwing multiple parties *every* year, and it also made it more special when we did have party.

I have tried to follow that with my own kids, for the most part. Carson had a "Glo-Golf" party last year, so this wasn't his year for a party. However, one of my friends asked to do a play date so they could give him a gift, and then Carson asked specifically to invite his one really good guy friend. So, what wasn't supposed to be a party kind of turned into one.

But, we are trying really hard to keep expenses to a minimum. I felt like if his friends were making an effort to bring him presents and be with him, then the least I could do is provide some kind of favor bags and a small treat. So here is what I came up with:

-we would have his get together at the mall play area=free
-I bought cookies from Walmart (he doesn't like cake, they aren't messy and I wouldn't have to buy forks!)=$3
-he wanted an "Avengers" theme, so I splurged on plates=$2
-we filled really fun favor bags, but we did it on the cheap, $3 per kid times 6 =$18
-for decorations, two helium balloons from the Dollar Store=$2

So if you want the low-down, here's what I did: 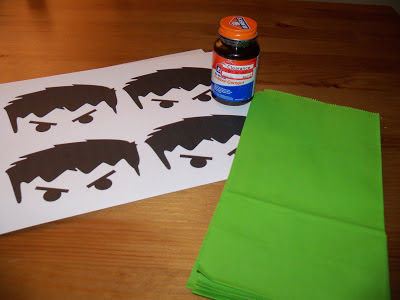 I made the favor bags using green lunch sacks from the party section at Walmart. They were 3 for $1. I printed these free Hulk printables from Cute as a Fox. I enlarged them and laid them out horizontally before printing, so they would fit on the bag. I am considering the two sheets of printer paper, ink and rubber cement I used to adhere the faces as "free".:) 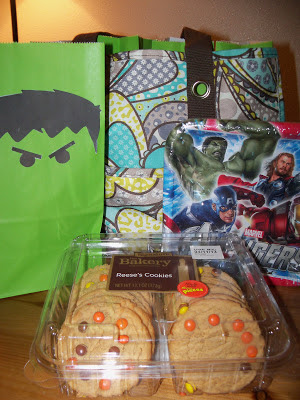 I loved the minimalistic effect, and the kids immediately recognized that it was the Hulk! I used my "31" Organizing Utility Tote to haul it all and it was the perfect fit. Carson doesn't like cake, and we had a really busy week, so I bought cookies from Walmart (they were actually really good!). You could make something at home and probably save even more! For some reason, character printed plates are always a huge hit with kids, so I didn't feel bad about spending the $2. Some of the kids even took them home! 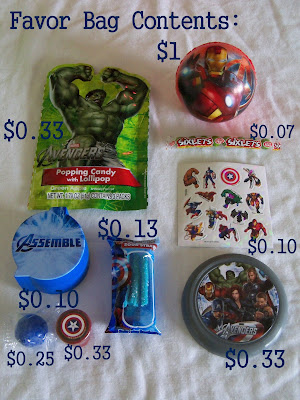 I was most pleased with what we filled the bags with. Since the "Avengers" movie is relatively new, there were plenty of choices! We put in stuff from:

So, including the bags, it was about $3 per kid for a pretty sweet favor bag. 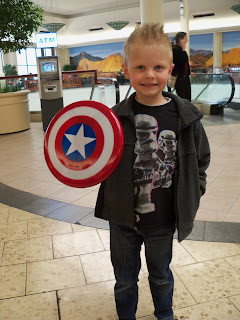 All that led to is one pretty happy 5 year-old. His friends gave him a Captain America flying shield, do they know him or what? All the moms had agreed to buy lunch for their kids in the food court, so I didn't provide any other food or drinks.

So basically, here is how to throw a party on the cheap:
-chose a cheap, or free, place to have it. Your house isn't necessarily the best choice, because not only will you probably have to clean, you will have to buy more than two balloons to decorate! That gets pricey, trust me, I know!
-look for seasonal clearance. Easter, Christmas, Back to School, Valentine's, even 4th of July, can be great boons for cheap favors! Look for things that aren't printed, just plain colors, if your theme isn't a character. I picked up adorable crayon packs at Target for $0.10 each (after Valentine's) that are simply red and white striped. They don't look seasonal at all!
-use your party store, or Walmart's party department. Buying things individually will cost a little more over buying them in bulk (per piece) but you can choose your colors and not buy more than you need!
-shop your Dollar Store, but look for things sold in packs, rather than individually. I only bought one item that was $1 per child, everything else came in a pack of three or more.
-stick with your theme, that will help narrow your focus and keep you from overspending!
-hand-make what you can, and don't forget to scour Pinterest and the internet for freebies related to your party. You can find cupcake wraps, banners, invites, and all manner of printables for free! All it will cost you is paper and ink.
-choose a time when you don't have to serve anything besides cake (or cookies!), or arrange for everyone to cover the cost of lunch themselves. My friends didn't mind paying. They know we are on a budget and we meet for lunch every week anyway.

Finances needn't be an excuse to deprive your child of a party if you want to have one! I think $25 is pretty reasonable, and I know all the kids had a blast!