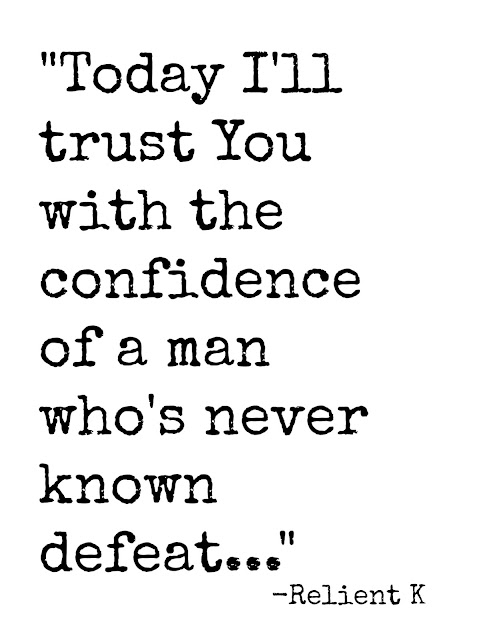 Contemplated by Clare at 6:03 PM No comments: 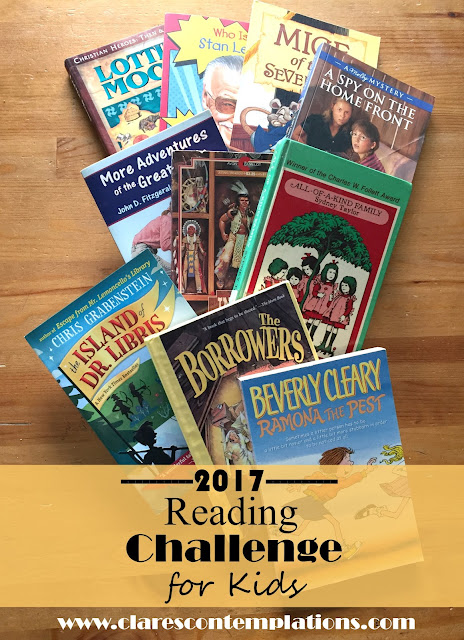 Last year I created a reading challenge for kids. It was so successful I decided to make another this year. (It was even featured over at Money Saving Mom!) I created a printable to make it easy to keep track of your child's progress. There were a few questions last time around, so I thought I would try to cover some of the answers here. Let me know if you have anything else!

Q. Should I use specific books?
A. Nope! I tried to choose reasonably broad categories, and you can adapt them as you see fit for your family. Nobody will fine you if you don't use it the same way as somebody else. ;) I did *not* create this with certain titles in mind. I don't have a list, and sometimes we picked books based on the categories and sometimes we read books and then found categories they fit into.

Q. Where can I find books for the challenge?
A. Anywhere you want! Your own shelves, the library, the thrift store, the neighbor, Amazon... Just don't steal them!

Q. How long should the challenge take?
A. As long as you want. If your child reads one book per category, there is a total of 20. You can spread it out over a year, just work until they finish the list, or if your child is a fast reader, set a shorter amount of time! Make it challenging, but not overwhelming.

Q. Can I read to my child?
A. Sure! If you  aren't catching on already, I really just wanted this challenge to be a jumping-off point, a catalyst to encourage kids to read a greater variety of books. If your child isn't a strong reader, or prefers to be read to, or you just want to share books together, feel free to read to them. Or mix it up and read some aloud, and have them read others independently.

Q. Should I offer rewards? If so, what kind?
A. You can consider that reading is its own reward, or you can use some "motivational tools". You can offer a small monetary amount for each title, you can offer candy or some other small treat,or even screen time! Or you could offer a new book at the end, or movie tickets, or a specified amount of money. Pick something that motivates your child! Please just don't make it drudgery or your child will curse me.

Q. What is the best age to use this?
A. For independent work, I suggest 8 to 12. For strong readers, you can definitely go younger. If you plan to work with your child you could probably even do 4 or 5, although I doubt they will appreciate the concept of a list. If you use it with a very young child just use it to choose titles yourself.

This is all about what works best for you. If it encourages your family to enjoy exploring books, or helps your child to read a few extra words this coming year, it was all worth it. If you don't like this list, then feel free to use last year's if you haven't already! 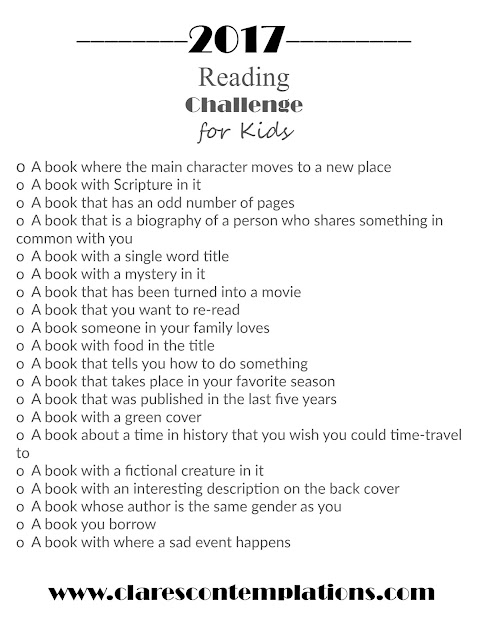 You will have the most success if you print the challenge from this link. Have fun and happy reading!
Printable 2017 Reading Challenge for Kids

Christmas Means There Are No Bit Parts 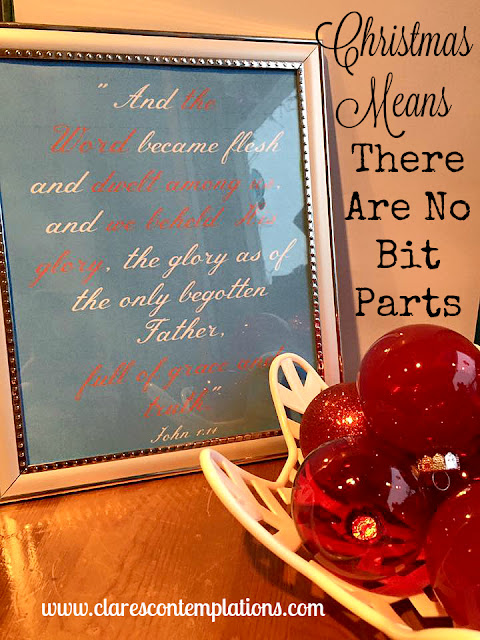 I can't believe that it is Christmas Eve and this is the first time the whole month I have taken the time to blog. I have chased dozens of ideas around in my head, I created a printable and even developed a new recipe, but I never would commit anything to print, so to speak. I have struggled my whole life with feeling inadequate and unimportant, and this holiday season it has really been getting to me. My every step, some days, feels dogged by chants of "not enough" and "no one cares". This isn't a pity party, it is just gut-level honesty, which is pretty much all I have ever put out here, so nothing new.

I won't blame anything, it isn't the fault of the media, or my friends, or my lack of therapy. I have learned that I need to rely on the Lord to satisfy my needs, as nothing else will do. And that is probably why I have been so heavily weighed down by my insufficiency, because I know what to do but I'm not doing it.

Sometimes I am just worried that I am not making a difference, that nothing I do really counts. Everyone else seems to have a starring role, and I feel stuck behind the scenes, or worse, standing in line hoping for a ticket. Everyone else has their name up in lights, and I can't seem to catch a break.

And I wondered if sometimes Joseph felt that way. In "The Christmas Story" he has a strange part, if you really consider it. He barely merits a few lines in Luke, most of his story is found in Matthew. He is called a "righteous man" and is recommended by his family line. He is the descendant of David that gave Jesus his heritage. But really, after he appears in the story of twelve year-old Jesus teaching in the temple, we don't hear much about him. He fades from Scripture and often our memories.

I recently bought a nativity to share with my preschool class. It was what seems to be the normal set-up, the holy family, the Magi, a little stable. I asked one of the children to name the pieces with me and when they got to the man with the staff they said, "shepherd"! No, it was poor Joseph, who had less significance in their mind than the lowly sheep herders. We know his name, but what do we really *know* about him? Not too much it seems, other than his background and his few actions that show him to be a protective, caring man of God.  But still, sometimes, he seems a bit part, his name appearing far down on the list of characters in the show. Did his name even make it on the marquee at all?

But you and I know better. Even if my preschool student didn't recognize Joseph's importance, we can. We know his obedience saved Mary and Jesus, that he had faith to follow through even when the way was unclear. We know he was vital to the story, just as God had planned it.

And when I really pay attention, I know that is true for me, too. Because Christmas means there are no bit parts. Jesus came so that EVERY life can have meaning and value. Every one gets to be essential to the story line that points to the glory of God with every page. He is the star, but we all get to have killer supporting roles, making sure that the message gets across.

"I have been crucified with Christ and I no longer live, but Christ lives in me. The life I now live in the body, I live by faith in the Son of God, who loved me and gave Himself for me." Galatians 2:19b-20 HCSB

Because He lives in me, all that I say and do has value. Just like Joseph, I have a part to play. And even if it seems small at times, in reality it will last for eternity if I am living by faith. I may not have more than a few lines to read, but Christ makes them essential if He is living in me.

"And whatever you do, in word or in deed, do everything in the name of the Lord Jesus, giving thanks to God the Father through Him." Colossians 3:17 HCSB

His birth and His death make every life important. Christmas means there are no bit parts. Thank You, Father, for sending Your Son.Help me to remember that You are the reason for *every* season, and You alone can make my life worthwhile.