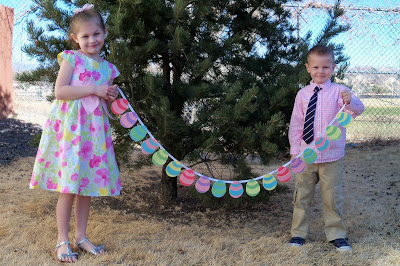 We just returned from a week long vacation ("Vacation", I have discovered is usually more draining than restful!) so Easter this year was really low-key. I like that, sometimes, and since occasionally I go overboard on smaller holidays (Valentine's Day, this year, for instance) I don't feel bad about reining it in on other days. Besides, Easter is really all about Jesus, and I don't think He wants me to be a Martha on what should definitely be a Mary day!

The egg garland for the photos was a last minute idea-I insist on taking photos before church on Easter Sunday, because who really knows what will happen in Sunday School! I bought this little garland for 70% off last year, and grabbed it down. I think I will have to try things like that more often, it really gave the kids something to do other than just say "cheese"! 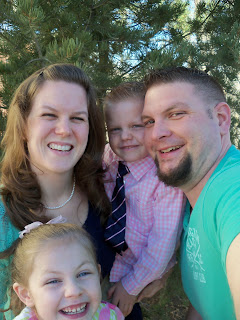 Our best attempt at a family photo. I didn't have time to mess with the self-timer, and since we were outside, I would have also had to find something to prop the camera on. Thank goodness Joel has long arms! (Although, it is still a little bit of an art-we totally cut Josie out of the first shot!) 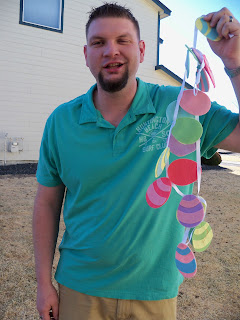 Joel's opinion of my garland. He is always the comic relief-so great in dealing with my idiosyncrasies, like having to use props for photos when we need to leave for church in five minutes.:)

Church was wonderful, I didn't take photos, but it is just always good to be in the house of the Lord. We had eight baptisms during our service, which is such a poignant reminder of what Easter is *really* about! A dad and his two little girls were all baptized together and it brought tears to my eyes. What a terrific example! 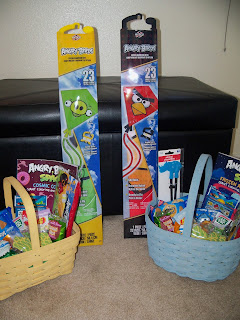 I decided on a theme for the baskets this year. Themes for gifts like this have pros and cons. The biggest con is that you go all over creation looking for matching items (We bought stuff from the commissary, the party store, the Dollar Store, Walmart and Target!) but the pro is that it helps me reign in my impulses to buy EVERYTHING!

They each got: a coloring book, tic-tacs, jelly beans, a coconut "nest" (thought that was a clever way to tie in to the "Birds"), Angry Bird graham cookies, Angry Bird fruit snacks, stickers and chopsticks (the only thing that didn't really match). Their big gifts were the kites, which were a hit. I also filled their eggs with Angry bird erasers, "Mashables"-gooey balls of Angry bird characters, and Angry Bird Cheese Nips. I even found "golden eggs" to fill, as well as putting candy Russell Stover eggs in. It was quite a successful theme, thanks in part to my sister, who bought several things and revealed the Dollar Store treasures! 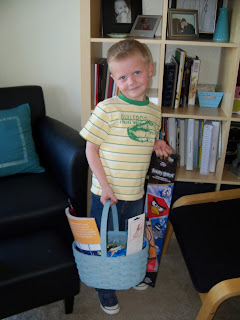 They were pretty pleased with their hauls. They really are gracious little people, and it humbles me that they are so thankful for such small things! 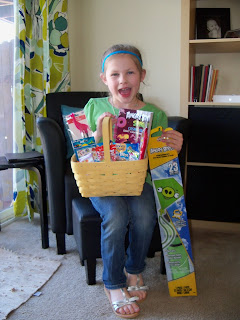 Josie is always ecstatic over "stuff" of any kind, so Easter is right up her alley. A big basket full of miscellaneous junk? Yes, please! 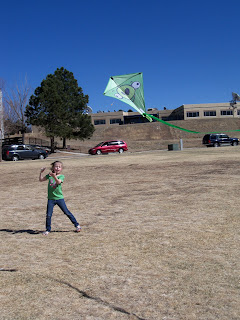 The kites were a huge success. We had a blast with our cheapy plastic dollar kites last year, so we splurged and got the nicer $6 ones. It was definitely worth it. The kids could launch these on their own, but I still joked with Joel that you need two people for every kite! 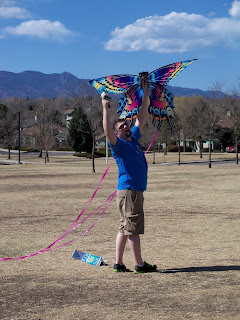 This is my kite! It was my Mother's Day gift last year, and I wasn't able to fly it until now. I am determined to get my money's worth this year (it was about $20). I launched it several times, but since I was flying it, I couldn't get a photo at the same time. By the time I asked Joel to do it, the wind had died down and I couldn't get one. He "faked" a shot for me! 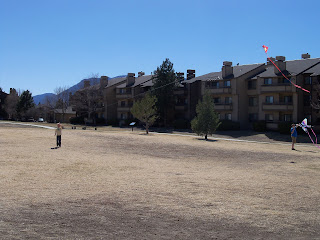 See how well the kids' flew? The little park we fly them in isn't ideal, because kites in the air take up a lot more room than you might think, and crossed, tangled strings are a nightmare, but we make it work. I love, love, love kite flying! 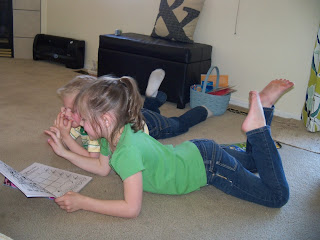 All the running around helped tire the kids out, too. Josie was reading the coloring book to Carson. They were fascinated to find out that all the Angry Birds have names! 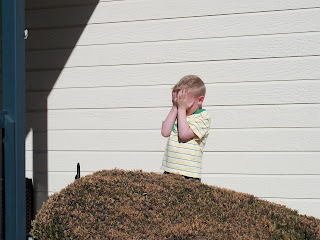 Finally we hunted for Easter eggs. We decided this year to let them hide each others eggs. That was a stroke of genius! Carson was waiting patiently for Josie to finish. 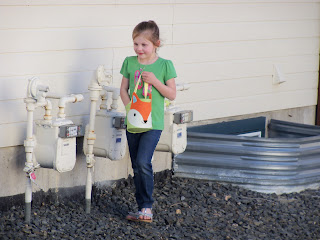 Josie took her job very seriously. They were so cute, looking for the best places. Then they gave each other hints. It really was a good way to get them involved in helping each other, rather than just begging to know it is was "my turn" yet. 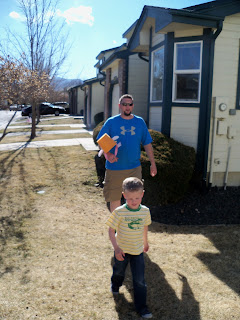 Carson had a little help from Daddy. And I didn't get any photos, but the kids organized an impromptu egg hunt for the neighbor kids. They hid 40 eggs that they filled with their candy they had gotten at a hunt in St. Louis. One of the little neighbor kids didn't even know it was Easter, which made me very sad! I thought that was such a sweet, generous thing for the kids to do.

We finished the day with Panda Express so the kids could use their new chopsticks. I guess if other people can eat Chinese on Christmas we can have it on Easter, right?:)
Contemplated by Clare at 9:19 AM