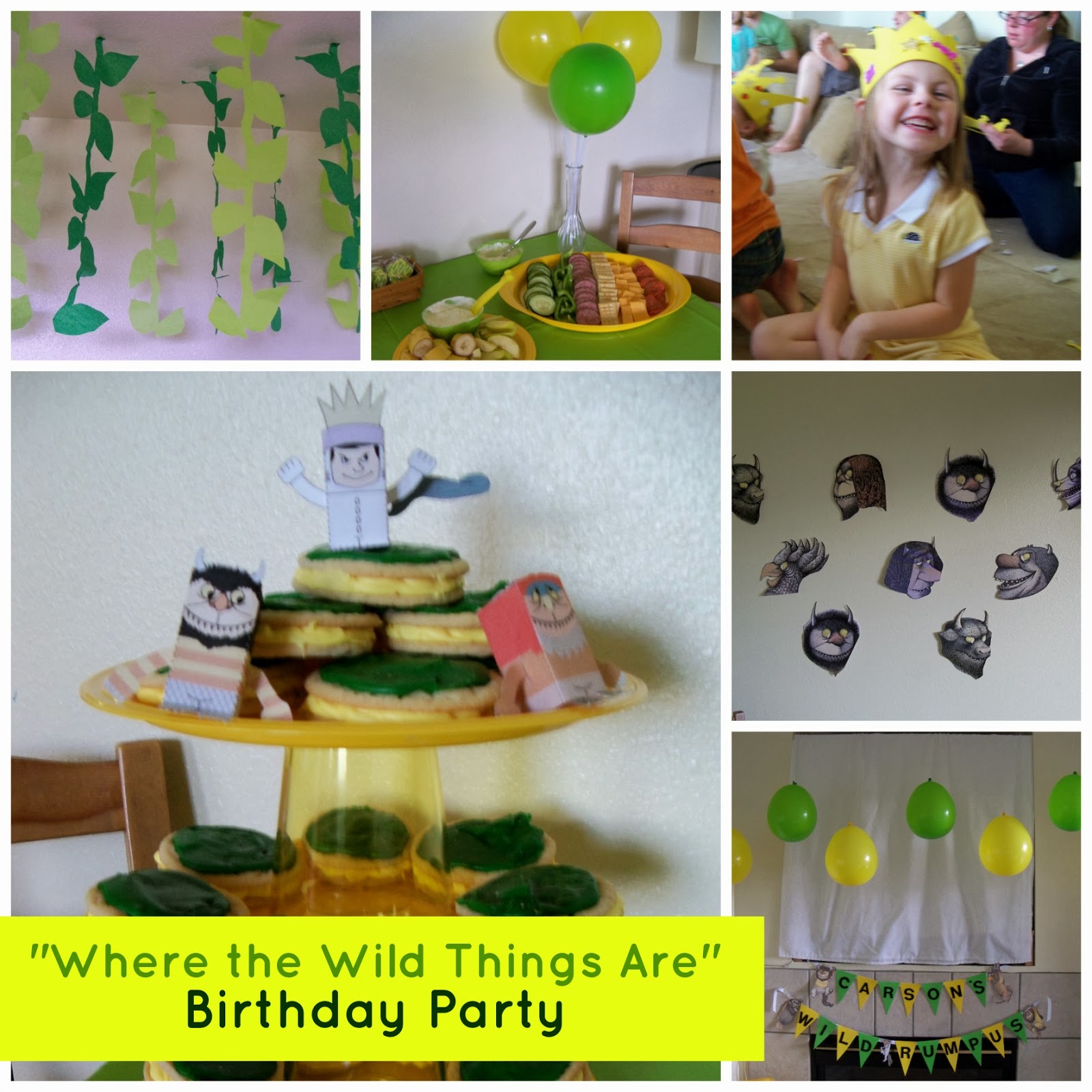 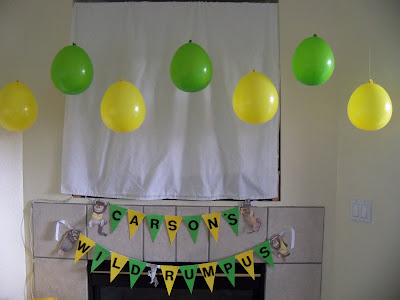 I have been throwing parties for a while now, but I haven't done a really good one for my kids. I have decided that pre-organized, buy-all-the-matching-pieces-at-the-party-store parties aren't really my style anymore. Well, Carson turned 3 in April, and I knew it would finally be my chance. He has never had a "real" party, the invite his friends kind, so it was a great time.

I won't lie, I picked to base the party on the book, "Where The Wild Things Are",for myself. I love it-it isn't Carson's favorite or anything. As a matter of fact, he had never even heard it until a few weeks ago! However, it fits his little personality so well, and I know he loves it now!

Of course, I had to have the banner. This one was fun- (my aunt told me a handy tip-click on a photo to enlarge it!) and pretty easy. I simple cut out images from the book and did simple triangle foam flags. I turned to my trusty felt letters for the words. I felt like "Carson's Wild Rumpus" was an appropriate title for a gathering that included kids from 21 months to 6 years. I prefer parties that included the whole family when kids are young, so I needed something good for varied ages and both boys and girls.

Hanging the balloons from the ceiling eliminated the need for expensive helium, but still provided that same effect. I will definitely use that trick again! 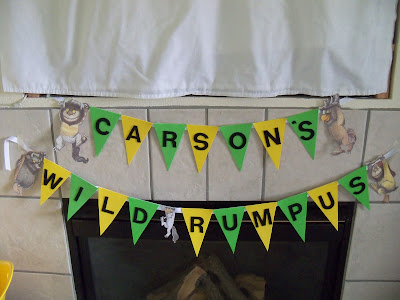 Just in case you were wondering, behind that white sheet is our television, DVR, Blu-Ray player and other various ugly cords and equipment. Since this area is the focal point, I didn't want all that stuff to be in the way. I popped a spring tension curtain rod up, threw a white flat sheet over it, and presto-chango, it went away! 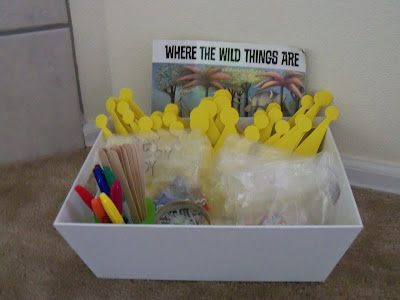 This was another great aspect of using this book: one of the party activities was making crowns for all the Kings (and Queens!) of the Wild Things. I bought foam crowns at the Dollar Spot, and fixed each child a baggie of foam stickers, plastic "jewels" and stars. To keep it simple, I made sure everything came with adhesive. Then the kids could do it themselves. 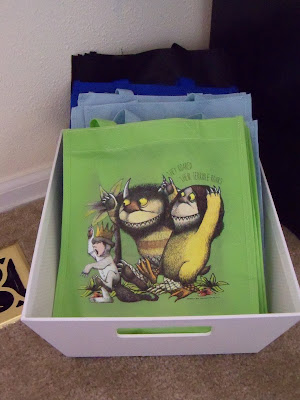 The beloved Dollar Spot strikes again! These little bags were so perfect! I put in a Wild Things sticker play scene, some bubbles (which I labeled "A Magic Trick to Tame the Wild Things) and a pencil. Since the kids would get to take home the contents of the pinata, their crowns, and their masks, I didn't feel compelled to fill the bags with too much other stuff. 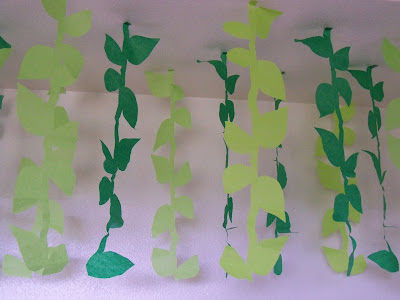 These were definitely the hit. I made "vines" out of tissue paper and it couldn't have been easier. They looked terrific. They gave it the space a great 3-D effect. I used this very vague tutorial from Martha. Essentially, you accordion fold the tissue, and cut around it. I made up a little pattern out of cardstock. 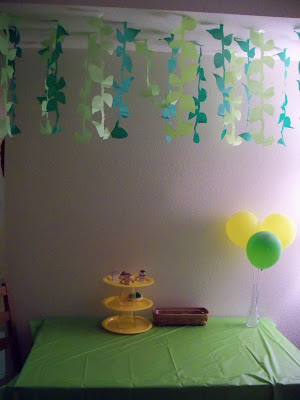 This is a better photo of the vines. I forgot to take a picture of them in context before the party. Doesn't an empty table after all the fun is over look so sad? 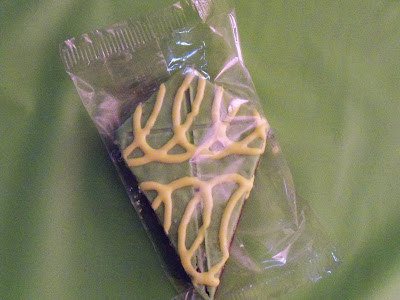 A cute little touch. I found these Little Debbie kite shaped brownies and couldn't resist them-they were an exact match to the party colors! 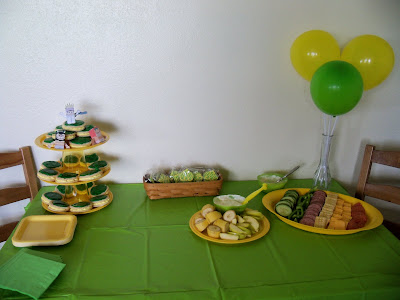 The table as a whole. Party basics: pepperoni/salami/cheese/cracker/veggie tray with dip and apples and bananas with fruit dip. The kite brownies are in the basket at the back. The cookie tray-more on that later. I love balloon sticks! One of the best investments for parties-I use them all the time. 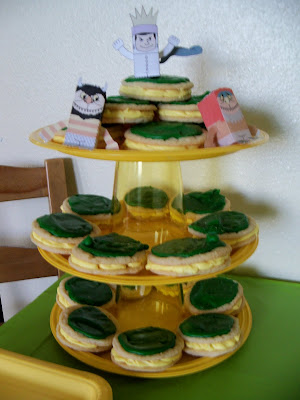 The cookies. I was looking for an alternative to the regular old cake or cupcakes. My friend, Denise, suggested "Double Doozies". I made place and bake sugar cookies, used green Betty Crocker "Cookie" frosting and colored vanilla frosting yellow for the filling. They were really fun, not messy (far fewer crumbs and frosting smears than with cupcakes) easy and colorful-in short, ideal!


I made the cake plate by hot gluing cups and plates from Walmart together. It worked really well. I wanted something less stuffy than glass and I wanted it to match. This was a good solution-and the plates were cheap-$1 for 4! 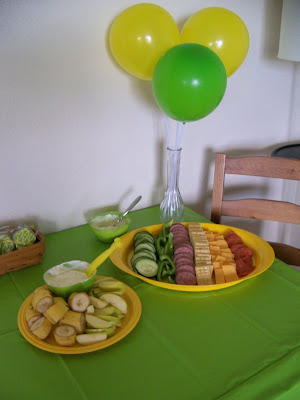 A better shot of the yummy munchies. I mostly stuck with the green and yellow color scheme, even for the food. It makes it more cohesive. 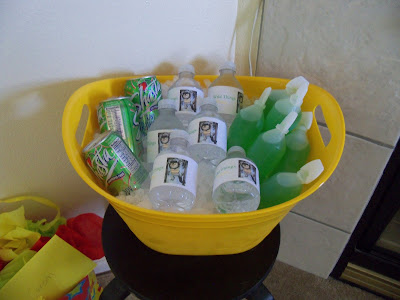 The drinks. Bucket was from Walmart. Kiwi-Strawberry Shasta-because Joel wanted it, watermelon Airheads drinks, and re-labeled waters. The labels were a pain, I don't recommend trying to do those unless you are far more computer-savvy than I am. But they did look cute! 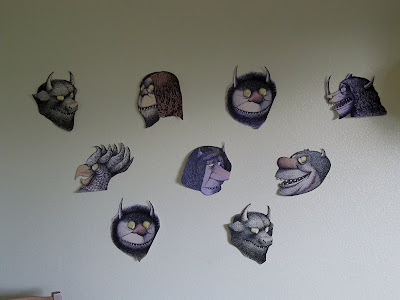 Okay, so Josie said these looked creepy, but I thought they were cool. I printed these faces and cut them out to make masks (find the pdfs here) for the kids. I thought they looked neat all together on the wall. Later, while I was reading the book the kids used them. 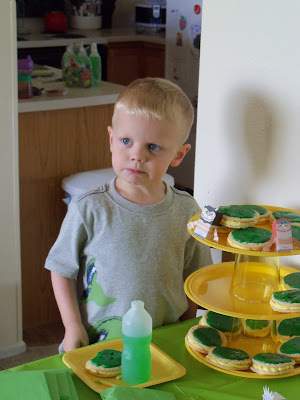 The birthday boy. Doesn't he look so serious? He was happy with the cookies,which was the important part to me. 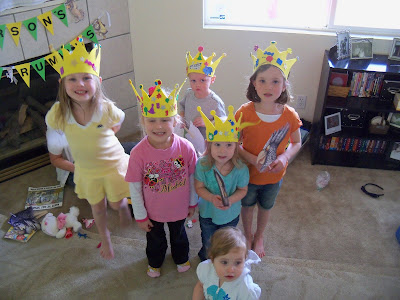 The kids after they made their crowns. This activity was well received. It was very easy, but they loved putting the stickers and jewels on. I liked it because it wasn't messy. 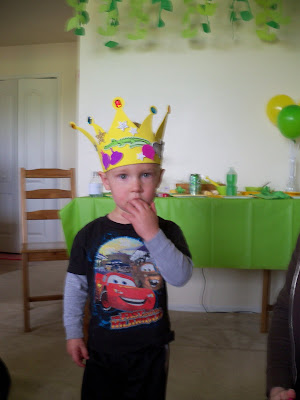 You can sort of see the vines in this photo. Laken pretty much always looks that serious! 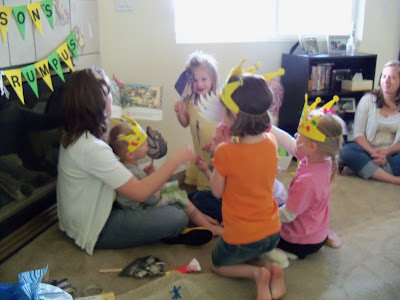 I read "Where the Wild Things Are". The kids wore their crowns and used the masks to pretend to be Wild Things. It was really fun. Several of the kids hadn't heard the story before and they really liked it. Acting it out got everyone involved. 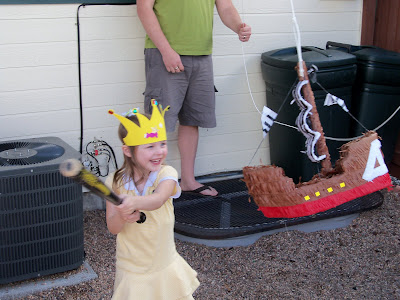 The pinata. I went with a pirate ship because it was the closest thing I could I could find to Max's private boat. I don't mind being crafty, but there was no way I was making a pinata. Carson specifically asked for a "pinyoda" so I obliged. I guess it isn't a party if you don't get a chance to beat something with a bat. 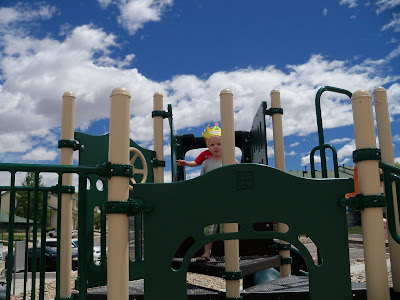 The party ended across the street at the playground. The weather was beautiful. The party turned out really well, it was definitely worth all the time and effort. And I know Carson liked it, because when he woke up from his nap, he said, "Mom, that was the funnest party ever!" Thanks, Dude.

I got a ton of inspiration from these sites:
-My Rumpus
-Armelle-the Blog

Contemplated by Clare at 5:57 PM