What I Learned About Books and Wreaths 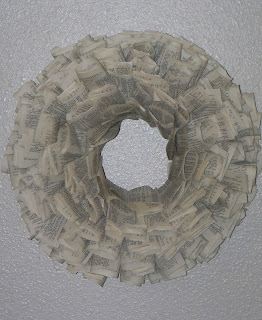 Because anything I do I have to do to the zenith this is yet another post about something I made. Don't worry-I am not planning on turning this into a craft blog. I just have to do anything new obsessively until I am (and you will be, too) absolutely sick of it! Don't hate me, just skip through this post. I PROMISE that my next post will not be crafty-as a matter of fact, I am working on something right now that does not involve Mod Podge, a glue gun or scrapbook paper. Still love me?

Anyway, back to the matter at hand. Since I obviously have nothing better to do with my time, I have spent many hours scouring craft blogs. I kept seeing the same project over and over (there is nothing new under the sun!) and at first I didn't think much of it. But after a while it grew on me. I finally decided that, because it was relatively cheap and required precisely my talent (little to none!) I would tackle it. So, I made a Book Page Wreath!

The supplies are simple, but most are needed in large quantities. I used:
-a 10" wreath (I used straw-mistake!)
- hot glue gun with approximately a million glue sticks (I actually used over 12 short ones)
-a book that you don't mind tearing up, with lots of pages
-time I didn't believe the tutorial when it said 2+ hours. Another mistake-it took me almost three! 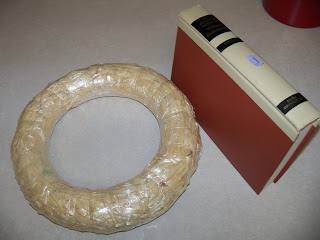 The supplies. They don't look intimidating, but these fellows conspire and ugly things happen! I was being cheap and went with a straw wreath. What a mess and it was soooo hard to get the pages to stick. If I am ever possessed and try this project again, I will definitely spring the $5 for a foam wreath. 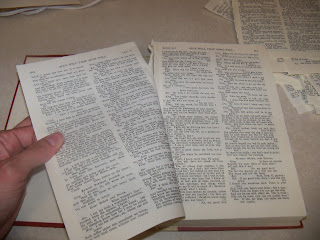 I didn't think that I would feel this way, but tearing up books is kind of fun. This copy of "Shakespeare, Volume 2" cost me a measly $2 at Goodwill. It had that kind of very slightly yellowing look I wanted. However, I will say that again, I would probably change this. First I would have ripped the pages a little more aggressively. I think that would have made it look even more "ruffledy". Second,this book was not quite wide enough and because of that it took a lot more pages to get it covered. Pain! 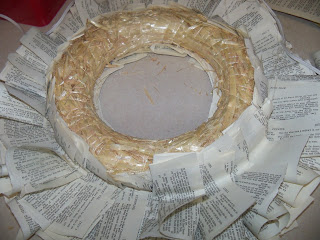 Looks weird doesn't it? The first couple of rows went on really quickly and I was fooled into thinking it wouldn't take that long. I was wrong-filling in the bare spots took waaaay more time than anything else. As a matter of fact, I got so sick of it I left it overnight. 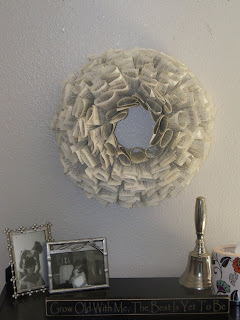 However, I was pretty satisfied with the end result. It is really pretty in person. It also adds a nice 3D quality to my walls. I think it would look great on a painted wall, but Joel says I am not allowed to paint.:( Fun ruiner!
Anyway, I found the tutorial here. Let me know if you want to make one, I will come help rip out pages. Or, I could just sell you mine for $500!:)

I shared my project at Jones Design Company!

Contemplated by Clare at 6:30 PM