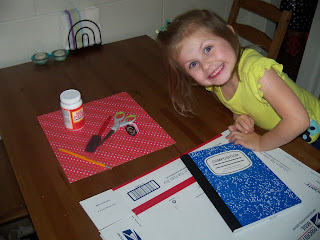 My helper in all things crafty. And our supplies. You like the makeshift cutting/glueing surface?


Well, fear not, I have found another Mod Podge craft! Thanks to my sister, Robyn, I got the idea to make a covered notebook from here. There is no real skill involved (my kind of craft!) so I kind of made it up as I went along! I found the scrapbook paper on clearance for $0.21 at Hobby Lobby- I used three different ones, already had the Mod Podge, bought the composition notebook for $0.25 at Target (although I was a little bitter because the first one I went to was out! Another trip out for a notebook that only costs a quarter? Really?) and the big expense was the adorable ribbon- a whole dollar! Other than that, I used my trusty hot glue gun and a button I already had. I knew I had been saving those extra buttons for something! So total cost for (what I think, anyway) is a ridiculously cute notebook -or prayer journal for me- is $1.75 with tax! Score! 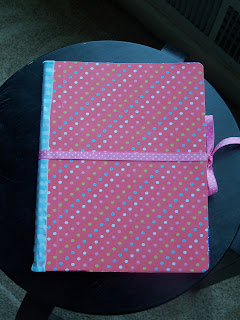 This is Jocelyn's notebook. It was kind of the trial run and she was in a hurry to use it. I measured the paper and cut around the cover exactly, but that didn't give me the smooth edges I wanted. 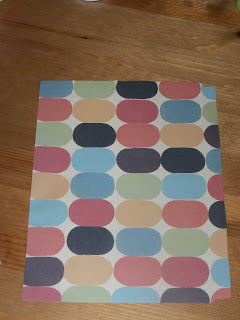 So with mine, I cut an extra flap so that I could fold it over and glue it to the inside of the cover. You can barely see the flap in the right hand side of the photo. 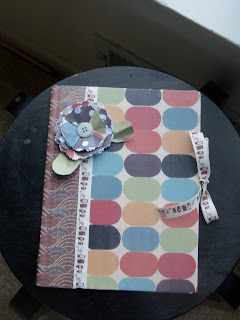 The finished product. I am so proud that I picked such fun paper! 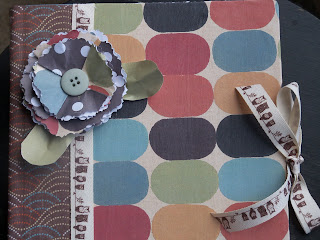 See the super cute ribbon? Don't you want some?:) I glued a piece to the front and back covers so it would tie on the side. 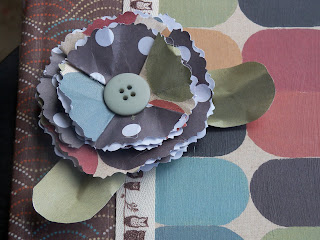 A close up of the flower. I made it myself! I found the easy tutorial here. You better believe I will be making more of these! Definitely worth the time and it turned out so beautifully. I used two different kinds of paper and then I cut two of the green ovals out of the leftover paper to make the leaves.

So there it is. It did take a little while to make (about 1 1/2 hour ) but I was so pleased with the result. Now, I have the perfect sermon note and prayer journal! Yay!

Contemplated by Clare at 2:34 PM