Thankfulness: From Hand to Heart Day 9 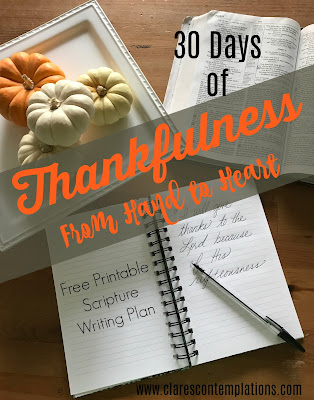 "I will praise God’s name in song


and glorify Him with thanksgiving."
Psalm 69:30 NIV

I grew up believing I did not have a great voice. I had a music teacher in second grade that informed me that the best I could do, singing-wise, was to be content being part of the mass choir that every elementary student was a part of. My longed-for dream of being part of the select choir my sister had been chosen for was dashed in that moment. And while I didn't stop singing, it did give me anxiety.

After that the only choirs I was a part of were church choirs. I did not try out for solo singing parts, even though I dreamed of being the only one holding the microphone, belting out the contents of my heart. I had a wonderful choir director the year I was a junior in high school, and he helped me to figure out my alto range, which made a big difference. It's hard to sing soprano when you're...not.

And finally, by the time I was a senior, having moved to a different state, I had enough confidence to try out for the solo all the girls wanted in our church's musical production: a fast-paced number by Rebecca St. James. It was catchy, it was upbeat, it was... perfect. All five of the senior girls and several younger ones tried out for that song, even though there were several other solos. We all wanted *that* song.

Imagine my disappointment when I found out what I was selected for: "Be Thou My Vision". An old hymn with strange wording I didn't even know. Yay. Not exactly the number I had my sights set on. Not what I wanted to be singing, at all.

But, I gave it my all, perhaps because a tiny part of me wanted to prove they had made a mistake by not choosing me to sing, "Go And Sin No More". And partly because "Be Thou My Vision" was my song, so I wanted to sing it the best I could.

And now, years later, I am thankful. "Be Thou My Vision" is a timeless classic. The other song was nice, but it just wasn't my song. And so, that's where all this is headed. You can only thank the Lord with *your* song. You can't sing anyone else's. We can all praise Him, but we can't all praise Him the same way, and we certainly can't all praise Him for the same things. My husband didn't get a big raise. We aren't moving into our new house. Our kid did not win the spelling bee... need I go on?

I have to praise Him for where I am, with what I have. I couldn't sing that song because I didn't have the voice for it. But that doesn't mean I don't have a voice. It just means I have to sing *my* song. And that's the one He wants to hear, anyway. Don't focus on what everyone else is singing-focus on what you have been given to glorify Him with-and be thankful He gave you a song.


When was the last time you were tempted to try to sing someone else's "song"? Discontentment is the opposite of gratitude-it says, "What I have is not enough. What I have is wrong." Repent for not appreciating what the Lord has given you. And think of something unique about yourself you can thank Him for! Praise Him because you are fearfully and wonderfully made. (Psalm 139)


Looking for the printable scripture writing plan? Or another day of the "Thankfulness: From Hand to Heart" study? Find them here!
Contemplated by Clare at 12:28 AM