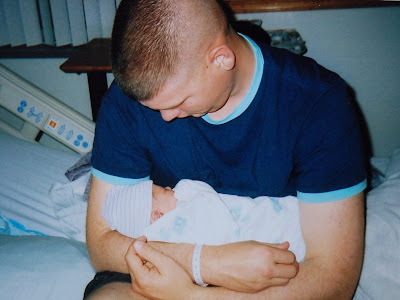 I have talked about the big changes that are coming our way before. We are really getting into crunch time, now. Joel received his form the other day from the big wigs that decide whether or not you are "fit for duty". We knew what his would say (due to his ankle surgery last year, he doesn't meet Army requirements), but it felt so very official to see the paperwork that said he was no longer eligible for service. And so much more real.

We are preparing to take a vacation. I know, it doesn't seem like the best time to me, either. But Joel really felt like this might be the last chance we have to do this for a while. To me, it will make the next couple of weeks fly by, and right now, I would rather that time stand still for a few minutes.

But, as everyone who has ever parented small children knows, time stands still for no mom. Every day seems to run away on winged feet, leaving me hopeless to catch it and actually make sense of things. And we all know what a worrier I am. I like to have things all planned out, and be ready for the future. But that, to beat a dead horse, is impossible right now.

So, I am trying to focus on the positive. And thinking about that reminded me of memorial stones. Memorial stones, like the ones from Joshua:

"So Joshua called together the twelve men he had appointed from the Israelites, one from each tribe,and said to them, “Go over before the ark of the LORD your God into the middle of the Jordan. Each of you is to take up a stone on his shoulder, according to the number of the tribes of the Israelites, to serve as a sign among you. In the future, when your children ask you, ‘What do these stones mean?’ tell them that the flow of the Jordan was cut off before the ark of the covenant of the LORD. When it crossed the Jordan, the waters of the Jordan were cut off. These stones are to be a memorial to the people of Israel forever.”
Joshua 4:4-7 (NIV)

They are memories of the time the Lord has provided in my life. Sometimes in completely miraculous ways, other times in ways that are "normal" but that still affect me deeply. Focusing on these things, these concrete examples of the Lord's working in my life, reminds me that He will not change, and since He has "engraved me on His hands" (Isaiah 49:16) He is not bound to forget in the future.

Often, He has come through in the 11th hour (His timing is perfection, but often it seems so close to "too late" in my human mind). I can't help but remember Jocelyn's birth: Joel was deploying to Iraq on the 1st of December. I was due on the 8th. The doctors wouldn't induce me. I was hysterical. I kept praying and praying, literally begging God to allow Joel to see our first child before he left to fight a war I wasn't promised that he would come home from. I was living in Texas, no family or friends nearby. It brings tears to my eyes to think of it every time. It was an impossible situation.

But God was there. And on Thanksgiving Day, we gave thanks for our new daughter. The one who arrived BEFORE her dad left. All through God's power and provision. Nothing I did could have changed that situation. I was completely dependent on the Lord. And He did not disappoint. We celebrated our few brief days as a family, and treasured the memories during that long year apart.

That memory is a memorial stone. A record of His care for me during a humanly insurmountable difficulty. During a time when I couldn't do anything, He was able to do everything. And He didn't even ask my opinion, but when I realized how futile it was to continue to to try to rely on my own strength and when I gave it over fully to Him, He gave me the desires of my heart.

You would think that I would have the faith of a Hebrews 11 hero after that point. But, I can be as forgetful as the Israelites. Here I am again, worried and stressed, after a million examples of how He has answered every question I have ever had. So, I go back. And I remember. Because to forget might be on the of the greatest tragedies in a Christian's life.

And sometimes, I am tempted to go drag rocks out of the ground to build a tangible monument to His grace, to have a physical pile of stones sitting in my way, reinforcing my fragile memory. But as the Israelites moved on, so must I. I must discipline myself to remember. I have to make these things the pure, lovely, of good report thoughts that I should be having (Philippians 4:8). Picking up these little pebbles and reviewing them, knowing them intimately. And that is a good practice, one I am sure I will be tested on sooner rather than later.
Contemplated by Clare at 8:05 PM