After Your Prayers Have Been Answered 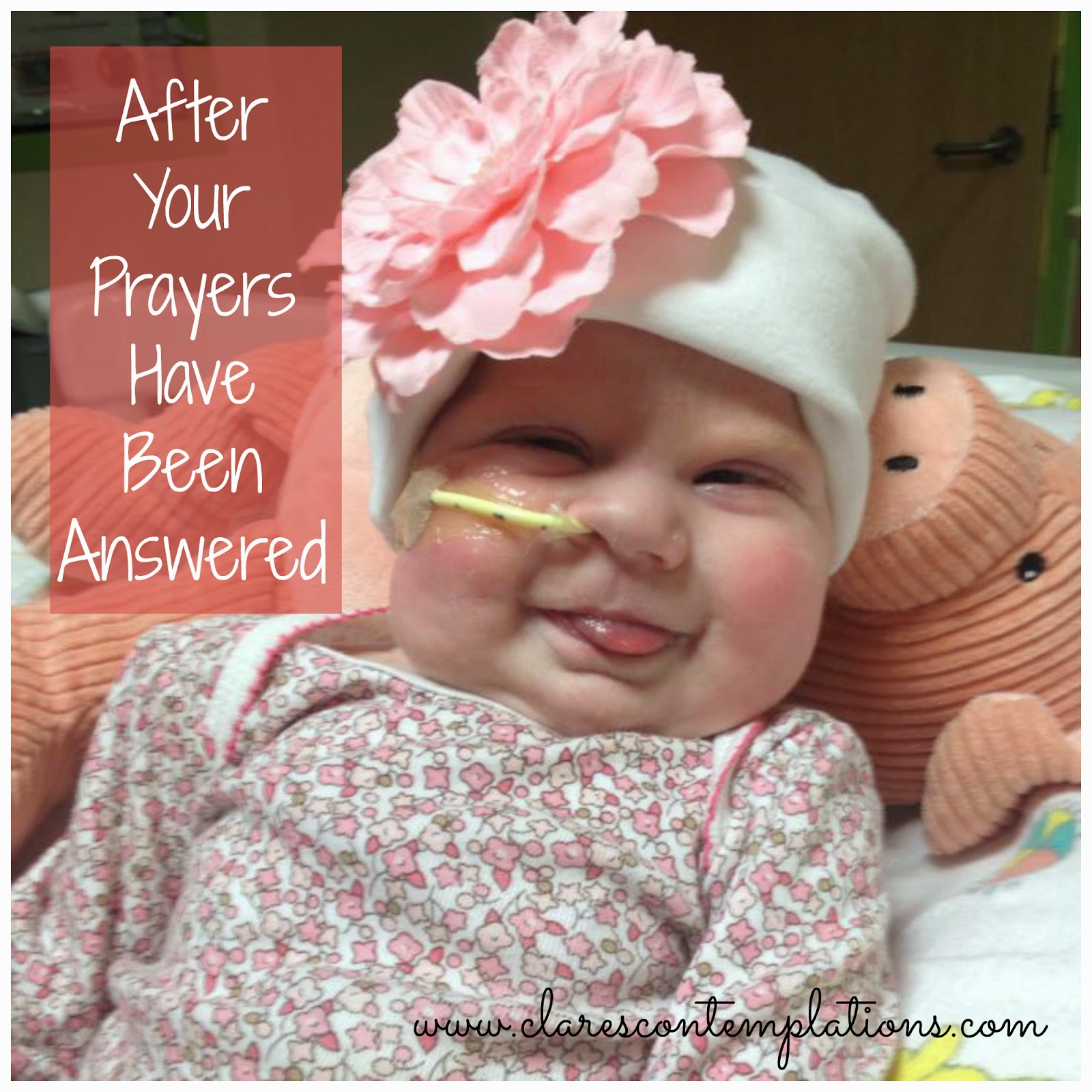 This may seem like a crazy question because it seems so obvious: you rejoice! But, as with anything in life, it is never quite that clear-cut. I went where I always go when I had questions, and not surprisingly, I found the answer:

"Indeed, we felt we had received the sentence of death. But this happened that we might not rely on ourselves but on God, who raises the dead. He has delivered us from such a deadly peril, and He will deliver us again. On Him we have set our hope that He will continue to deliver us, as you help us by your prayers. Then many will give thanks on our behalf for the gracious favor granted us in answer to the prayers of many." 2 Corinthians 1:9-11 (NIV)


I laughed when I saw this passage, because it really couldn't suit our circumstances any more perfectly. If you have been following me for the past few months you know that my niece was in desperate need of a heart transplant. She had truly received a death sentence, her own heart could not sustain life. We were completely without options, we had to rely on God. No one had any power to obtain a heart on her behalf, we could only pray, hoping and trusting that the Lord would see fit to allow her life to continue while we waited, and that He would answer our prayers by sending a heart that would, in so many ways, "raise the dead". Because without that answer to prayer, she was as good as dead.

So we prayed and waited, and waited and prayed. Sometimes, honestly, I had more faith than others. Some days, I had complete peace, and sometimes the tempest raged. Sometimes I smiled, sometimes I cried. But I knew He was working.

And it took four months, which may not seem that long, but it felt as if it were an eternity. Many days, I went to bed praying that "tomorrow" would be the day. And it would pass. My sister lives a three days drive from where most of our family lives, and because she has three children at home we had decided that either my mom or I would plan to come and help her while she juggled being a homeschooling mom and also being at the hospital (which is over an hour away). We finally decided I would fly out and leave my own kids with my mom.

But it still wasn't coming together, plane tickets were expensive, it wasn't really feasible for me to drive so far by myself, and about a thousand other little details just weren't being taken care of. It just wasn't working. We kept looking for a solution and everyone was frustrated. We discussed all kinds of plans. And then on the last Friday in January I felt the clearest Voice saying, "Wait." That's all, just wait. I was worried that my mom and my sister would be frustrated that I wasn't still looking for an answer, but when I talked to Robyn on Friday I finally admitted to her that I really felt like the Lord had an answer that we couldn't see. That I really felt like we needed to just pray about it over the weekend, and I strongly believed that He would give us a clear answer if we were just willing to bide our time. And surprisingly, they both agreed. We would take the weekend to pray and make a decision about what would happen on Monday.

Well, if you follow Miss Gracey's Facebook page you know what happened. Joel and I had decided to sleep in, and I actually still had my phone on vibrate Saturday morning, but I was awake enough to realize it was buzzing at about 8:30am. My mom was calling-her voice was shaking, and she only had a minute, but she said, "They think there is a heart for Gracey." Well, I knew right then that was our answer! And boy, was it sooo much better than anything I could have planned! Shortly after that, Robyn called. She didn't make a whole lot of sense, but I couldn't blame her. Gracey was getting a heart!

Everything we had been praying for, fasting over, dreaming of, was about to come true, And in typical fashion, God had covered every detail. Because He is THAT good. I would say I couldn't believe it, but the funny thing is, I never doubted that He had done it in His perfect timing, and this was exactly what we had been praying for.

And I contemplated fasting, for Gracey and the surgery, and the doctors, and my sister. But I decided that it was a day for rejoicing, for recognizing and reveling in the goodness of God. It was definitely a day for "giving thanks for...gracious favor"!  And the excitement carried well into the next day after she had the surgery. Everyone was elated, we just kept exclaiming over and over what a miracle the whole thing was.

But a few days after that, I became a little overwhelmed. There were still so many things that could go wrong. You don't take a heart transplant lightly-recovery is long and arduous, there were still many obstacles to overcome. Should I have been praying about these things before she even got a heart? Should I worry that the Lord had brought us this far to take a sudden turn? Should I feel guilty that Gracey got a heart when so many other babies needed one? Should I be sorrowful for the family that generously allowed Gracey to live when their own sweet child had died? I felt guilty, because God had given me exactly what I wanted and it seemed that I still wasn't satisfied.

And that is when I realized: an answered prayer isn't an end-all, be-all. We will still need God and continue to need Him, and that is a very important part of His plan. He gave us what we wanted, knowing it would bring glory to Him, but He wouldn't have allowed it to take place if it had relieved us of our reliance on Him. It was still very good and right to know that we will need to be "delivered again". I needed to set my hope on the fact that He will continue taking care of the details and not overlook anything.

And so, while I am rejoicing and praising Him in gratitude, I will still be relying on Him to answer all the questions that this answer has brought. The two needn't be mutually exclusive. He is still using Gracey to bring glory to Himself every day. Healing brings great glory to Him, and I wasn't at all surprised that the sermon text this Sunday was one that I referenced in my original blog about Gracey's great need.

"As He went along, he saw a man blind from birth. His disciples asked Him, “Rabbi, who sinned, this man or his parents, that he was born blind? “Neither this man nor his parents sinned,” said Jesus, “but this happened so that the works of God might be displayed in him." John 9:1-3 (NIV)


God has displayed a great work in Gracey's life. But He still has much that He wants to do, so now that my prayer has been answered, I will rejoice and be glad, but I will still look to the Lord to provide for the future. I won't ask why He chose us to receive this great blessing, but instead will rest knowing that it is what brings the greatest glory to Him. I am sure in Jesus' day there were many blind people who He did not heal. That did not diminish the miracle of this healing in John. So, it is also true that Gracey's healing is not diminished by the seeming lack of His response to others whose needs are just as great. I can trust that He will work in those lives in a way that will bring the greatest glory. I can trust that He will provide peace and healing to the donor family-that their loss which brought us such amazing gain will glorify Him in their lives-perhaps drawing them closer to God and each other. Only He can know. I can continue to pray for the situations that come up now that Gracey is post-transplant, believing that He who has delivered us will continue to deliver us again.

And I already know that many are giving thanks, after many have prayed. It is a beautiful, beautiful thing to celebrate answered prayers with the family of God. Nobody knows quite how to party like His people. So, the short version: After your prayers have been answered, you should praise and pray. I can promise you that the answer to your prayer will not be the end of your story, so keep looking to Him and for Him. And thank Him for allowing your need for Him to continue. He wants to keep answering your prayers, He longs to show you that He is truly all you need. Trust me, that's a good thing. He won't be done showing His glory in your life. That's what I'm planning on doing, anyway.

P.S. Gracey is truly doing amazing. There are thousands of people who are covering her in prayer, and I know that the Lord is working in such a mighty way through all of that. I can't believe that the grinning baby in the photo above was barely opening her eyes a little over a week ago. God gave us a definite miracle and I will never stop being thankful.

Contemplated by Clare at 4:44 PM