The Story of a Sofa 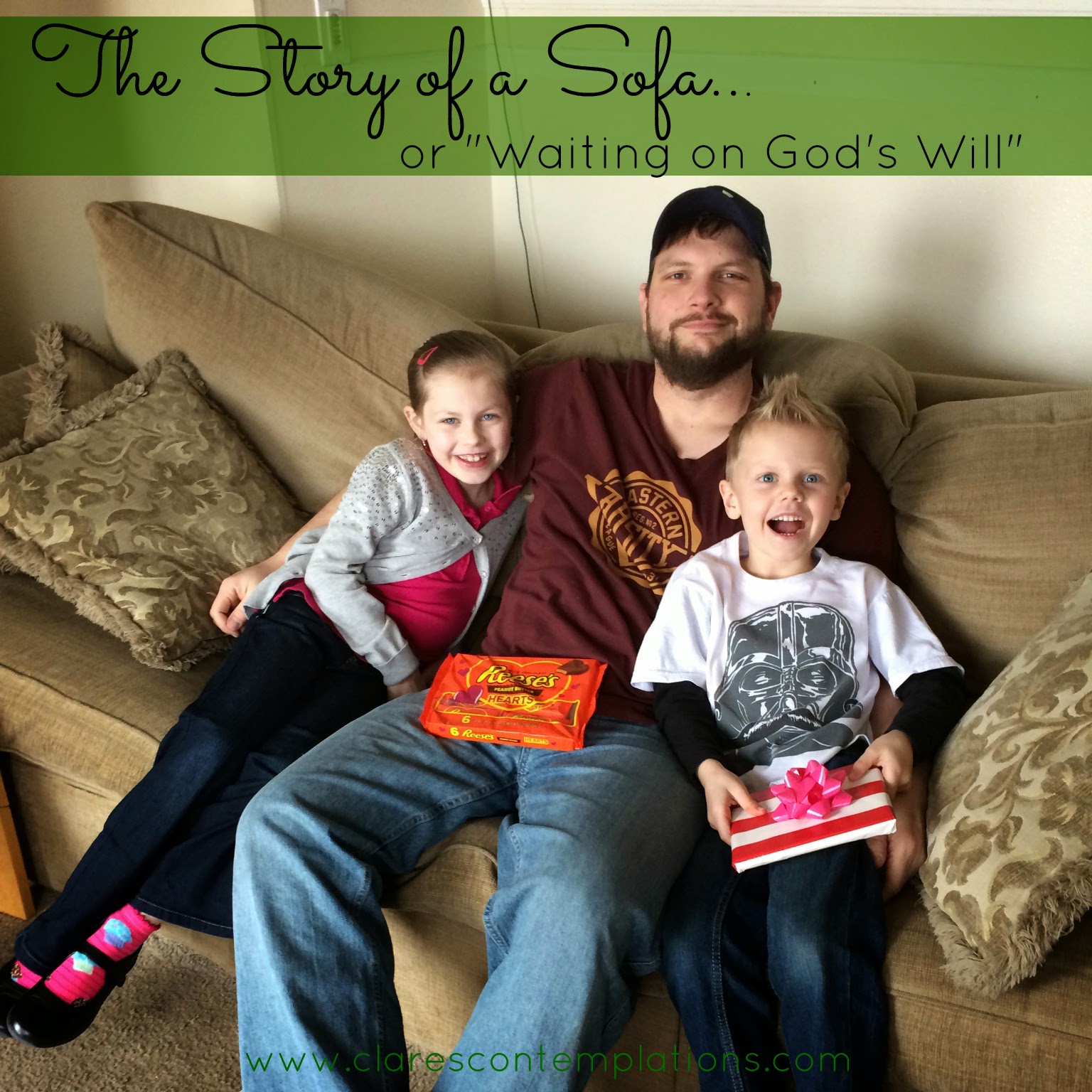 So, the good news first: we rented an apartment. I have to say, it really feels like this is where the Lord is leading, and that is exciting. I floundered recently in my faith, mostly because I wondered if we had misunderstood what felt like the Lord's direction to move here. It was not a decision we made lightly, we loved Colorado for so many reasons, not the least of which was our wonderful friends and church family. But when we got here and we haven't been successful in our job-seeking efforts (Joel is "under" employed at the moment) which closed the door on our hopes to buy a house, it started to feel like perhaps we had tried to align God's will with our own desires. So, we both went back and prayed, and searched our hearts and waited.

And our answer was an apartment. Which is not what I was expecting. At all. See, the thing is, we haven't lived an apartment for years. Eight, to be exact. We have never owned our own home, and we have never lived in a single family home, but we moved from a duplex in Texas to a townhouse on Ft. Carson to a townhouse in Colorado Springs after Joel got out of the Army.  That last one- well, in a lot of ways it was the stuff dreams are made of. Lower middle class, blue collar, frugal homeschooler dreams, but dreams nonetheless. It had a *garage*-for my car (just my car, not the lawnmower or the trash can, but still)! And a *basement* (full of randomly duct-taped insulation and creepy spiders) that was a wonderland for storage of all kinds. And a *walk-in* closet-big enough for both seasons of clothes and all of my shoes (don't even ask how many pairs I have). And TWO bathrooms-a first for our little family after living for 7+ years with a single toilet and bathtub. The floor plan wasn't ideal, both the bathrooms were on the second floor, and there was no backyard to speak of, but we had definitely moved up in the world.

And the house that we were only going to live in for 8 months (we signed our lease at an odd time of year, so they wouldn't lease it to us for a full 12) turned into 3 years. And then we randomly decided to move. So we did. And we shoved an entire family of four's boxes into my parents' shop and garage. Bless them, Lord, for they deserve sainthood. And we dragged our clothes and shoes and various other "necessities" all over their house for the last three months. And we searched for a place to call our own, because no one should have to live with their adult children and their kids for longer than that if it isn't an absolute necessity, right?

So, after looking at quite a few rental houses (everything was wrong, wrong, wrong-mostly the price tag, but that is the most important part!) it just wasn't working. We went back to square one. An apartment had gotten crossed off the list of housing possibilities for a myriad of reasons, not the least of which that they do not (normally) come equipped with yards. And since my children have run amuck in my mother's neighborhood like island natives for the last three months, that just seemed like cruelty to animals, ahem, children. And also other little things, like not hauling your groceries up *outside* steps. And listening to someone else's music, and smelling someone else's cooking. And don't even get me started on space issues.

But, one of my most favorite characteristics of God is His humor, and He is definitely laughing over this one. We have ended up in an apartment. I am surprised by how at peace I am with that decision (although I shouldn't be, because He is the one giving me strength, and every good gift is from Him, right?). I lost over 300 sq ft. of living space, not to mention the basement. No yard, and it has a stack unit for a washer and dryer that is so tiny I literally have to wash my sheets separately-and by that I mean I can't put my king flat sheet in with my king fitted sheet at the same time. But it does have a garage, and a dishwasher, even a little window A/C! And the kids are dying to try the pool. So, we are thinking that all is well.

That is, until the sofa. Now, to give you a little perspective, my husband is above average. Literally. He is 6' 4", and weighs over 250 lbs. So, we don't have tiny furniture. As a matter of fact, we own the longest conventionally manufactured sofa that they made back in 2003, the year we bought it. And it is huge. The thing is every bit of 8 feet long and wide enough that when I sit all the way back on it, my feet don't touch the floor. And I'm not tiny!

But our apartment is. So, the guys (my dad, my husband and my brother-in-law) dragged this huge beastly piece of furniture up 11 cement steps and wedged it inside the door. Now, when I say, "wedged", don't think I am exaggerating. It was touching the ceiling at one corner and the floor at the other and the walls on both sides. And no one had to hold it up, either! Due to the strange layout of the apartment, it was stuck. The kitchen "doorway" wasn't wide enough, the sofa was too wide and too tall to turn the corner to fit through the short hallway on the other side to living room. We couldn't flip it, we couldn't angle it, we couldn't remove enough parts to get it in. For well over an hour they wiggled and jiggled, and turned and backed up and eyeballed things. And I prayed. Because for the last three months, my husband's one thing he has missed about having our own home is sitting on his couch to watch TV.

And in the end, it just didn't fit. I would love to say that they hauled it over the balcony (they considered it, but the 15 feet was just too great a distance) or that they could "pivot" (let me know if you catch that reference) enough to get it through. But it just didn't work. So, our enormous sofa, my beloved's favorite piece of furniture for the last 11 years, was dragged back down the stairs, back onto the trailer. And he never cries, but I am pretty sure there were tears in his eyes.

And what is the moral of this story? Well, I am learning that. I think that first, just because everything doesn't come together seamlessly doesn't mean that you aren't doing God's will. I think that He uses so many things to teach us greater trust and faith, deeper contentment and satisfaction in Him. I think sometimes He uses little things (like big sofas) to remind us that we may think that we have it all figured out, but He is really still in charge. Sometimes, you literally cannot force it-no matter how bad you may want to. Mostly, I think because of this:

"I am not saying this because I am in need, for I have learned to be content whatever the circumstances.I know what it is to be in need, and I know what it is to have plenty. I have learned the secret of being content in any and every situation, whether well fed or hungry, whether living in plenty or in want. I can do all this through Him who gives me strength." Philippians 4:11-13 NIV


We love to quote the last verse, but we neglect to pair it with 11 and 12 which really give it heft that makes it a little scary. We love to talk about being content with all we have, but what about what we don't have? What about being content with less-so much less that you are sitting on the floor? We have soooo much further to go before we will see the lack that caused Paul to know need and hunger, we haven't the faintest clue about such matters. But maybe if our bottoms are a little sore, our hearts will be a little softer.

I briefly thought about rushing out to "fix" the problem. A little credit card action and we would be back in business with a brand new piece of upholstered seating (and I would be rid of the sofa that I don't love nearly as much as my spouse!). But instead, I have decided to pray about it, and seek that I would truly begin to understand what He is teaching me. Because a 900 sq ft. apartment without a sofa isn't what I was looking for, but just maybe, it is exactly what I need.