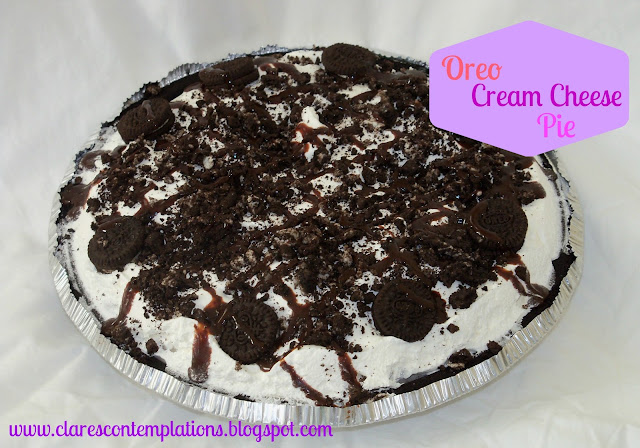 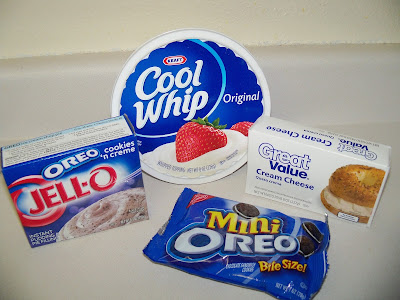 You will only need a few ingredients:
1 pre-made Oreo crumb crust, buy it where you would buy pre-made graham cracker crust

For the cream cheese layer:
4 oz., or half a block, of softened cream cheese
1/2 cup powdered sugar
8 oz. container of Cool Whip-softened (you could use homemade whipped cream, but I prefer the texture of Cool Whip!), you will divide this

For the pudding layer:
1 box of Oreo pudding, this is larger than a standard package of pudding, but it still only makes 4 servings, that's the size you want!
1 and 1/2 cups milk

Topping:
-Mini Oreos (I used two small bags, one crushed and one whole) and Hershey's syrup for topping, but only if you want it to be "fancy"!

1. Blend the cream cheese and powdered sugar together until smooth.
2. Add 1/2 cup of Cool Whip and blend again.
3. Spread evenly on bottom of pie crust.
4. Mix pudding according to package directions for "5 Minute Pudding"-but only use 1 and 1/2 cups milk!
5. Spread pudding evenly over cream cheese layer.
6. Top with remaining Cool Whip.
7. Sprinkle with crushed Oreo cookies, and use whole miniature cookies around edge.
8. Drizzle with Hershey's syrup.

Cover and immediately refrigerate pie for at least 2-3 hours for a softer pie, or freeze 3 hours to overnight for a firmer texture. Delicious either way! 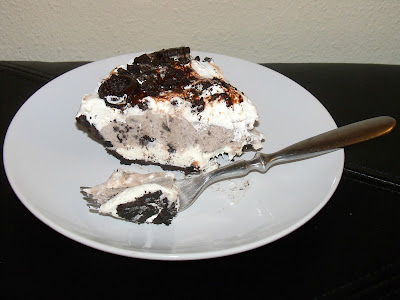 Serve to at least 8 appreciative friends or family members! It isn't the *most* photogenic of pies, but it is tasty. Of course it is, it has cream cheese in it!

Linking up:
"Thrifty Thursdays" at Living Well, Spending Less
"Super Saturday" at Made From Pinterest
Contemplated by Clare at 9:34 AM