Empty as an Unfilled Ice Tray 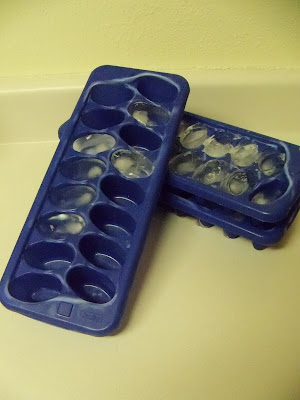 I have ice trays. What, you might say, does that have to do with anything. Well, you must remember, that often what is NOT said implies volumes more than what actually is spoken. What I am really saying is that I do not have an ice maker, therefore, I have old-school plastic ice trays.

And I don't like them. It is hard to get the ice out of them, you have to remember to fill them, and they fall over in my freezer. My tiny, tiny, freezer that does not have room for ice trays.

And I want to be bitter. You may laugh, or wonder why, all you ice-maker-having people, but it really can make one bitter. I forget on occassion to fill them, and then I don't have ice. I know that strange things can happen to ice makers that limit the production of ice, but it is rare. My forgetfulness, on the other hand, is not so rare.

I know, too, because I have had ice makers. Ice whenever you want it, fresh for the taking. No struggling with popping trays (which, by the way, are not made like they used to be-they keep cracking!) or running them under water in vain attempts to release the cubes. So many more cubes than my three measly trays can hold. And also, ice maker ice is skinny, not fat little lumps that don't fit in my water bottle or my kids' cups.

And knowing what I did have and what I have now, it makes me want to be bitter. And frustrated. And crabby. Feelings that are utterly wasted on my inanimate and completely unfeeling little blue plastic trays.

Feelings that aren't wasted on me. Because I have discovered, bitter thoughts breed company. Misery loves company, but bitterness-it just makes friends for itself. One bitter thought turns into another and another, and pretty soon my mind is swamped with thoughts of, "I don't deserve this" and "It isn't fair" and "This is anyone's fault but mine." And it is difficult to pull out of the tightly winding spiral.

That is why, when I started listening to myself over the three extra minutes it was taking me to pry the tiny pieces of frozen water out of the miserable little contraptions I stopped and thought:

"We demolish arguments and every pretension that sets itself up against the
knowledge of God, and we take captive every thought to make it obedient to Christ."

Every thought? Even petty ones, about ice trays? Yes! Because Paul knew (and of course, it was inspired of God!) that even little thoughts can lead you far, far astray. Because complaining about ice (or the lack thereof) leads to discontentedness with ice trays, and then freezers, then fridges, then kitchens and pretty soon, you need a whole new house. Trust me, I know.

I won't pretend. I could try to think of why I am thankful for my ice trays. I have running water, and a freezer that freezes, and drinks that need ice. I don't own this home, so it won't be my permanent problem. And sometimes, that works.

But sometimes, that can cause problems for me, too. I try to figure out how my life is superior to others, and that is pride, not thankfulness. So tonight, I took a different approach. I thought, "This is stupid. I am wasting time and mental energy complaining over something that is really nothing. Moving on to something new."

And it didn't happen instantly, but when I made a conscious decision to redirect my thinking, it worked. Of course, I revisited it for the purpose of this post, but I am not bitter anymore. My ice trays are really not worth my time in the bigger scheme of things. And I am a very little person who needs a longer to-do list if I am going to focus on something so inconsequential.

And I don't want to be inconsequential. I want to focus on what is important in life. I don't ever want to see the tally of the minutes of my life and see more than about 3 seconds devoted to bitterness over ice trays. Because you know what? I was created for more than wasting time stewing over things that won't last.

"Surely they are like stubble; the fire will burn them up. They cannot even save
themselves from the power of the flame. Here are no coals to warm anyone; here
is no fire to sit by."

That is what those kind of things are worth. Any person, or action, or thought, that is not totally devoted to increasing the greatness and glory of Christ is worthless in the bigger scheme of things.

I want to be a fire, no matter how small, through which people can be warmed by the love of Christ. I want to provide light and heat. I don't want to pursue idle thoughts that last for only a moment in terms of worth, but greatly diminish my capacity to pursue my intended purpose: warmth and vision-filled with the One who ignited the Truth in me. Otherwise, I am as empty and pointless as an unfilled ice tray...

Contemplated by Clare at 5:47 PM