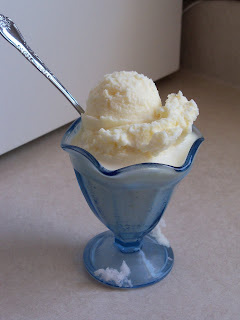 Isn't that a tasty and delicious looking dish of ice-cream? Would you believe that I made it out of...snow?! I know, everyone has heard of snow ice cream. But I had no idea it was so easy- or tasty! 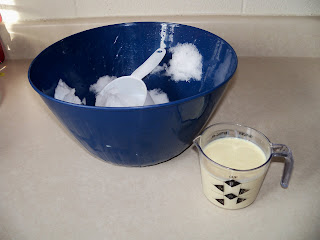 I looked on the internet for recipes. Most of them called for heavy cream, condensed milk, or half and half. I didn't have any of those things on hand. Quite a few called for raw eggs, and I wasn't comfortable serving that to the kids. I saw a couple that just called for vanilla, milk and sugar, but I was worried that might be grainy. Then I hit upon an idea: we had eggnog in the fridge from the holidays. I figured that would work well- and it did! After all, eggnog is eggs, milk, sugar and spices, right? My very simple recipe ended up being:
Eggnog Snow Ice Cream
1 c. eggnog
6 cups clean snow
Mix until well blended. Serve (or freeze) immediately. Serves 4 generously.
Fun, huh? I liked the really creamy consistency. To ensure that I had really clean snow, I set out a plastic bowl last night on the back steps. Although, this is probably not a great recipe if you are a germ-o-phobe! 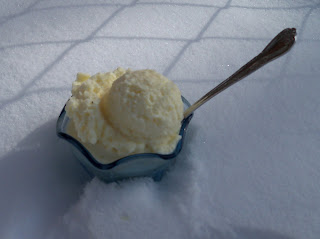 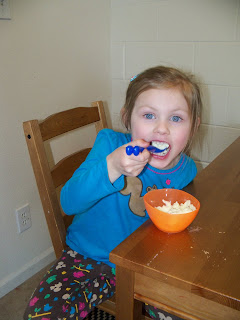 The kids really enjoyed it and they thought that it was great fun that it was made out of snow. Since there was a considerable amount of snow in it , it really didn't taste too eggnog"gy". Carson, sampling his.
So, that's it! Our first taste of snow ice cream. I am sure we will be making more- it is the perfect kid-friendly recipe, since it doesn't require beaters, or anything raw. I think we will probably try a more traditional version next time, but for now the eggnog saved the day!