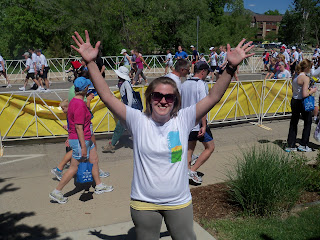 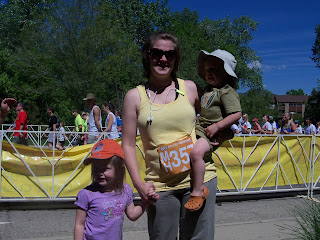 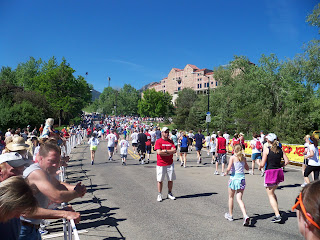 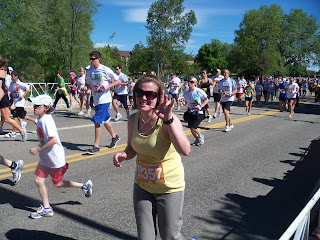 So, no doubt by now, you have heard that I ran in my first 10K on Monday. It was....AMAZING! I have had a secret life-long dream of being a "runner". There is something that just appeals to me about the idea of running. February 1st came and I had not run one step, not a single one. Then our Lifegroup (that's Sunday School teacher for those of you unitiated into FBCBF lingo) leader challenged us to sign up to run the "Bolder Boulder", a 10K run. I was a little frightened but decided to go for it. I started out running a measly 4 minutes and walking a minute.Yeah, I know, that whole 5 minutes was definitely going to get me in shape!

I kept at it,though, hardly ever missing a run. I found out that it was hard, but I really liked it! Some days were good, others were bad. I ran in the rain, in the snow and in the wind.In the beginning of May I bruised my right foot pretty badly. That kept me off of it for a week and then I bruised it again! I was a little nervous that was going to keep me from running the whole race but thankfully it started feeling better the week before.

The morning of the race I was even more nervous but I just kept thinking that if worse came to worse I knew I could just walk the whole thing. Boulder was crazy when we arrived! There were cars and people with race bibs everywhere! I am not a big person for crowds but I just kept thinking it wasn't about all the other people. It was something I just wanted to do for me. I found my "wave" and joined the crowd. There were 54, 000 participants! That is a lot of jostling elbows. I was glad that, in the end, I was not early because I think I would have gotten even more anxious waiting. Soon, the gun sounded, and we were off!

I wasn't running for time, I just wanted to run. Good thing, too, because there was so much to see. Every block had live performers and most of the houses along the route were having parties in the front yard. There were people with sprinklers directed at the road to cool everyone off. There were even houses where people were throwing marshmallows and giving out Doritos! There were belly dancers, too, old ones! That is not to even mention all the people in costume. There were women in their fifties dressed as Alice, the White Rabbit and the Mad Hatter. There were teenagers in "Flash Dance" costumes. There were even two boys, one with a crown and the other with two coconuts, replicating the horse scene from "Monty Python".

It was certainly enough to keep my mind off running! I hit the first kilometer sign and I thought, "I am 1/10th of the way there. Lord, here is my tithe of running, I guess the rest is up to You!" And He, of course, surpassed my wildest expectations. I didn't even realize I was running half the time! I just ran my little heart out. It was truly one of the most satisfying things I have ever done. It so reminded me of the passage from Hebrews that talks about running the good race. I had trained to run and I couldn't let anything stop me. Every mile there was a drink station and I had to be careful not to slip on all the cups in the road. I had to not get too distracted by all that was going on around me. I couldn't focus on anyone else's race-only my own. If I needed encouragement I only had to look around at all the people cheering me on. Especially encouraging was the runners who had already completed the race who had come back to support those still running. You know, the "great cloud"?

"Therefore, since we are surrounded by such a great cloud of witnesses, let us throw off everything that hinders and the sin that so easily entangles, and let us run with perseverance the race marked out for us." Hebrews 12:1

I guess I never really expected running to be a spiritual experience. But, it really was. It was such an amazing opportunity to be able to worship the Lord in the midst of all those people. My little Ipod blared my favorite songs by Jars of Clay, 10th Avenue North and the Newsboys while I focused on the beautiful mountains in front of me and all the joy around me. It was really great to see Joel and the kids right after I finished the 6th mile. They gave me that final boost to complete the last .2 mile I had to go. Finishing was so wonderful! Even though my time wasn't anything to brag about (1 hour 22 minutes 56 seconds), it wasn't the time, it was the completion. I can't wait until next year... .
Contemplated by Clare at 10:48 AM