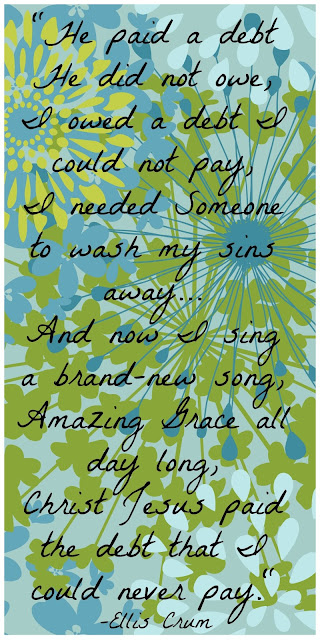 My first "real" job (read: one where I had to fill out a W-2 form and all that jazz) was working retail. I worked at a boutique clothing store that sold pricey, trendy clothes. Which was a little bit odd, because I myself was not very trendy, and I would have said my preference was definitely more towards the frugal side of things. However, I soon realized I loved clothes and didn't mind paying a bit more for higher quality and really unique items. Thankfully, we had many customers who felt the same way. I say that because it was a commission position, so my paycheck depended on how much product I could move. It was much easier when people were on board with paying $100 for a pair of jeans, rather than $10.

But anyway, it was while working retail that I fell in love with Black Friday. I know that sounds like an odd thing to say, but when you work commission there is no better day than when customers flock to you in droves, desperate to get the deals and steals they are convinced exist. There is so much energy, and excitement when you know all your hard work is going to result in a big fat paycheck. Plus, we generally had pretty decent customers. When the average total was usually in hundreds (or even, on very rare occasions, over a thousand) you are just dealing with a different type of person. They aren't your average "pick a fight over the bargain bin DVDs" sort of shopper. So, I learned quickly to enjoy Black Friday and the big fat commission checks it brought.

I did wonder why it was called Black Friday, though. I asked around and heard from various sources that supposedly it gained that title after the Great Depression when the Friday after Thanksgiving was considered the opening to the Christmas shopping season, and due to the massive increase in sales thanks to holiday shoppers, retailers would go from being "in the red" to "in the black", accounting-wise. So I while I still thought that was a little odd, as usually "black" has a more negative connotation, I was satisfied.

I have maintained my fondness for Black Friday since then, although the reason I like it now has more to do with spending time with my family (we all love to shop) and getting good deals. So that might be part of the reason that I slip up, and when referencing Good Friday (as in the day we commemorate Jesus' death on the cross) accidentally call it "Black Friday". (I know you thought I had lost my mind talking about Thanksgiving shopping at Easter! Don't worry, I do have a point.) I wondered if maybe there was anything in common between the two days so I decided to look up the history of Black Friday, as I am already fairly familiar with the history of Good Friday (Thank you, Jesus!).

I was interested to find that I had been given bad information. The term "Black Friday" was first used in the sixties, and *not* for positive reasons. It was used by the Philadelphia Police Department to describe the chaos and confusion caused by the masses of shoppers, and was perceived by the PD to be a rather dismal day indeed. As the term continued to gain popularity, it was not highly favored by retailers, and for good reason. When you think of "black" it doesn't really incite positive vibes. Also, it is hard to not to think of things like "Black Thursday"-the name for the day when the bottom fell out of the economy in the U.S. and the Great Depression started. Or, that when we are mourning someone's passing we wear black. It is a color devoid of hope.

However, with the upbeat-ness that usually accompanies the ability to run a successful retail operation, stores decided to turn things around, and that is where the explanation of the phrase "Black Friday" in terms of financial gains came from. Why not use whatever you can to your advantage? So, they perpetuated the rumor that the moniker came from the profitability of the day, going from being "in the red" to being "in the black".

And I don't think it is too far of a stretch to say that there are definite similarities between those Fridays-Good and Black. Good Friday-taken alone, without the joy of Sunday, had to feel black. The blackest of any Friday, ever, actually. I cannot begin to fathom the despair that those who had followed Jesus felt. However, before any religious group applied the term, to the enemies of Christ it had to seem like the most good of any Friday. They had won! Or so they thought.

But just like Black Friday, it seems Good Friday experienced a little bit of an image overhaul. And the turn-around was pretty darn quick. To those who had sought Jesus death, dreaming of the day the would be rid of that trouble-maker, rabble-rouser who turned so many of their carefully protected religious rules on their heads, their victory was short-lived. Good Friday had a black eye by Sunday in their minds. But for those who loved Jesus, Sunday was the day that turned that black day into something Good.

And now, to me, this day is a day that can be fairly represented by both adjectives. Black, because we should recognize the severity of the price our sin-my sin-exacted on our precious, perfect Savior. A day to remember and mourn the cost of my unworthiness, my unrighteousness.

His pure, holy, blemish-free life. For my worthless, ragged, wretched one. It was the most unfair of trades. But, like Black Friday, it took my account from debt to riches. From reddest red of His righteous blood, my glaring hell-red debt was paid, and name added to the "paid" column, from the "owed" line to the "saved" one.

" And when you were dead in trespasses and in the uncircumcision of your flesh, He made you alive with Him and forgave us all our trespasses. He erased the certificate of debt, with its obligations, that was against us and opposed to us, and has taken it out of the way by nailing it to the cross." Colossians 2:13-14 HCSB (emphasis mine)

Good Friday is good because it was a black Friday, too. Black from the sin, the doubt, the heaviness that cost Christ His life. So, so, good because I was reprieved from the death I was owed as the wages of my sin, what I had worked for and earned was eternal separation. But my debt was paid in full. From red to black.

"For the wages of sin is death, but the gift of God is eternal life in Christ Jesus our Lord." Romans 6:23 NIV

I don't need to shop around, the deal of any lifetime was given on Good Friday. His sacrifice is all I need, no cost-comparisons are necessary, I will never find a better offer. Nothing for everything. Death for life. Friday's blackness for Sunday's light. Filthy as night rags for the whiteness of robes of purity.

I love this Good Black Friday. It is my favorite Friday to celebrate for certain. So, even when I slip up and call it Black Friday, it doesn't really matter because the significance is the same. Today, I stop, I sit, I ponder the wonder of the day that Jesus *willingly* suffered death for me!

"[Jesus]  Who, being in very nature God,    did not consider equality with God something to be used to his own advantage; rather, he made himself nothing    by taking the very nature of a servant,
being made in human likeness. And being found in appearance as a man,    he humbled himself    by becoming obedient to death—        even death on a cross! Therefore God exalted him to the highest place    and gave him the name that is above every name, that at the name of Jesus every knee should bow,    in heaven and on earth and under the earth, and every tongue acknowledge that Jesus Christ is Lord, to the glory of God the Father." Philippians 2:6-11 NIV

Those who  plotted and planned Christ's death thought they had a good Friday and got a black Friday. But I got all the best parts of both when I asked Christ to be my Savior. Accepting His gift of salvation erased my debts and made every day good-worth living to His glory. I am thankful for all of that day, the black and the good. 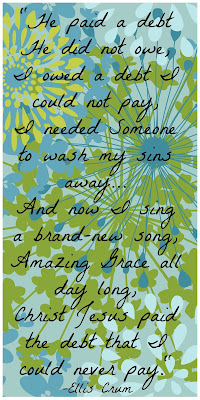