I debated sharing this, because it isn't an "original" idea, but let's face it: often things that I think I am the first one to do I find someone else has already done, because as Solomon said, "There is nothing new under the sun!". I know I do enjoy seeing others' interpretations of things, though, so I decided I would share mine!

This is that time of year when there are so many people to thank. Honestly, anytime someone willingly volunteers their time and energy I feel that it is worthy of a thank-you gift, even if it is only a very small one. Even if someone doesn't value the "thing" they will most likely recognize the thoughtfulness behind it and appreciate it. I was once given an angel-shaped pin as a thank-you gift for volunteering in Awana. I don't really "do" angels, and I never wore pins, but I was so honored by the gesture. It still remains as the only thank-you gift I ever received from a parent for working in Awana. (I have been privileged to work with wonderful directors and commanders who have given me many lovely gestures of appreciation, so don't feel too sorry for me!).

Another time, when I was directing Vacation Bible School, I was given some wildflowers stuffed in a mason jar and tied with twine. So lovely!  I hadn't directly taught that woman's child, or lead them in music, or crafted with them, but the mom realized that I had still played an important part. Even I am guilty of forgetting to recognize the "leadership" in many situations-the steering committees, directors, commanders, and all the higher-level leadership that make so many wonderful things "go".

Anyway, this time there is no fancy printable tag, but I didn't have to make a million of these, so I didn't mind hand-writing them. Both of my kids were in the same part of the program so I only had a few leaders and the director to thank. I usually try to stick to a $5 limit for year-long programs (co-op, Awana) because I usually have between 12-18 people who I give gifts to in May. I bought myself one of these insulated cups earlier (they had a version with cacti on it, which I am totally obsessed with at the moment) and I liked it so well I thought they would make a great gift! 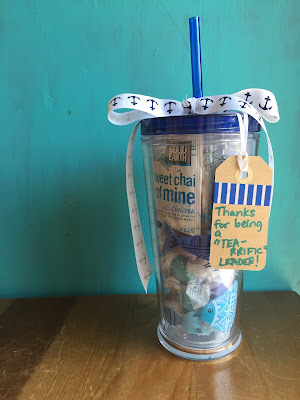 These came together quickly, and would have been even easier if I had made them all the same. I made them individual to each teacher and filled them with:

-tea bags. The blue cup had chai and Earl Grey tea, the yellow cup had orange and lemon ginger. I bought a box of the chai because I wanted to try it myself, but the others were purchased individually in the bulk bins at WinCo. $0.15 each makes them a bargain! I put four bags in each cup.

-candy. The blue cup had salt water taffy (huckleberry and raspberry) from the bulk bins.I bought less than a half a pound so it was super cheap, about $0.75. The yellow one had Sweet and Sour Starburst, which were $2 from Walmart, but I did not put the whole bag in. 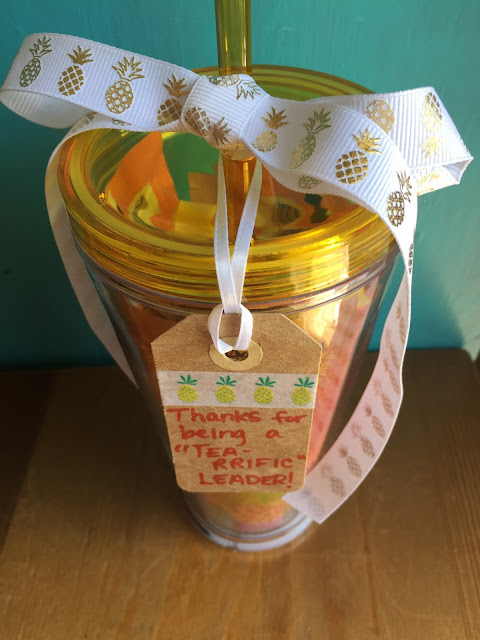 I also put in a few things you can't see. The yellow cup had two packs of Juicy Fruit gum, and the blue one had Ghiradelli chocolates in it. The total for those things was about $1 each.

I had the ribbon on hand, as well as the kraft tags.On the tags I wrote, "Thanks for being a "tea-rrific" leader!".  I wrapped those with a little washi, tied them with some plain white ribbon  and then slipped them over the straws. I tied a decorative bow on in coordinating ribbon (I was so pleased that I already had pineapple washi AND ribbon for the yellow cup!) and they were done! I could have easily purchased everything at Walmart, but I couldn't decide what I wanted while I was there, and I wanted to mix and match tea bags without having six or eight different boxes of tea!

Isn't it amazing how I can find *so* many words to describe something so simple? Essentially boiled down: buy cup, tea bags and candy. Write tag. Put tag on. Tie ribbon. Gift! They were well received- I would have liked one myself!

So, who are you "thanking" during this ending of things? We still have soccer coaches, dance instructors, and co-op teachers to go. Summer brings swim lessons and VBS, too! I have at least one more gift I will be sharing, but not until it's been gifted. I know school is ending for many of you, but it won't be done here until mid-June, so I have some time yet!
Contemplated by Clare at 5:27 PM