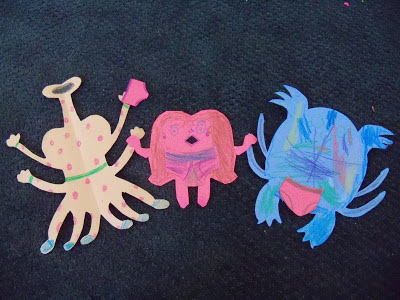 I never loved science as a child. I don't blame my mother, I'm not sure why I never had a fondness for it. However, Josie loves science, and I try to foster that. I think science in the younger grades is about exploring and having fun. I try to do occasional unit studies to give my kids a better understanding of certain subjects. For the past three weeks we have been studying the solar system. Since our books are due back to the library tomorrow, I decided to end our unit with something fun: aliens!

No, I don't believe in aliens, and really they have precious little to do with science. But I came across these adorable "Alien Adoption Certificates", and I couldn't resist! 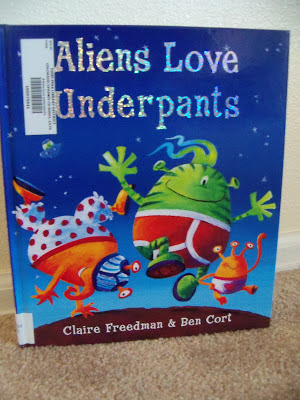 First, we "studied" aliens. I had never heard of  "Aliens Love Underpants"-but it was such a cute book! The kids laughed over all the aliens antics with various undergarments. Josie has been studying symmetry in math, so we discussed how all the aliens in the book are symmetrical. Even Carson really understood how  if "you cut an alien in half down the middle you have two of the same pieces!". 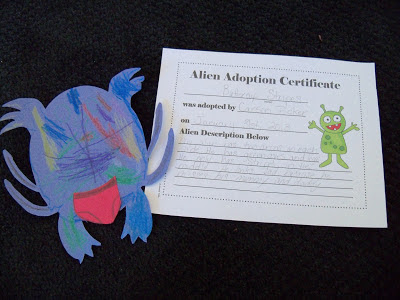 We then cut out our own symmetrical aliens! The kids folded construction paper in half horizontally and traced half an alien design (I helped Carson with the cutting and tracing). Then they colored them and filled out their certificates. Carson named his "Buttercup Stripes" and said that Buttercup looked sad because he missed his mommy and daddy. 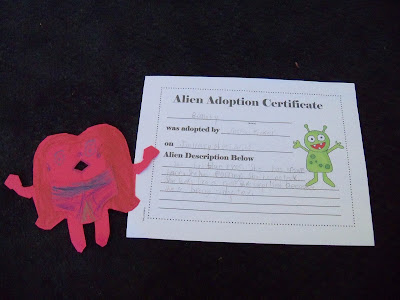 Josie named her's "Beauty" and said Beauty looked like a tooth! Josie traced and cut her own-even cutting out a mouth. She said Beauty's mouth is "open in surprise because she is being adopted." We have been working on paragraphs, so this was good practice for that, too. 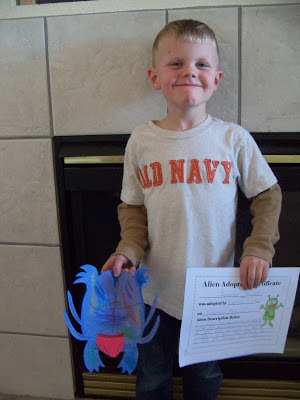 Carson was insistent on adding underpants to his alien. He also told me to put that Buttercup "only has stripes in the middle". 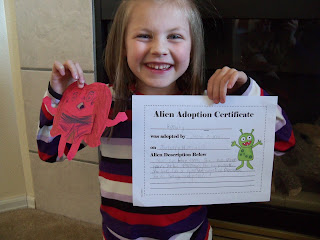 Josie was thrilled that I could make underpants to fit her alien (it was trickier than you might think!). She did all her own writing. 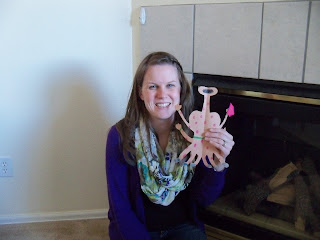 They even made me make an alien! I named mine Hoopdy Hoop.;) Josie said I needed a picture with my alien, even though I didn't make a certificate.

I love when I can find projects that work for both of them, and are fun, too. This project had math, reading, writing and grammar-but not really any science. I'm okay with that though, if aliens did exist, it would be in outer space! If you want to check out some of my other inspiration for the real science part of our unit, check out my Solar System Pinterest board.

Contemplated by Clare at 4:34 PM