On Being the Tooth Fairy 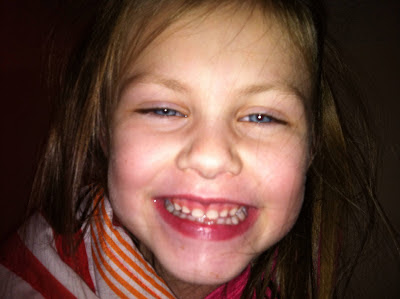 On our way home from North Carolina (I really should post about my trip to my sister's!) Jocelyn started crying and saying her tooth was hurting. I was initially concerned (and I think she was, too) because she had a particularly bad cavity filled just a few weeks ago, and it had been painful prior to being filled. I had her open her mouth and show me the tooth. No cavity, it was just loose! I don't know who was happier-me or her! She was thrilled to finally have a loose tooth!
I forgot how it is when you are surrounded by tooth-losing friends, and you feel left out of their special "club". She was finally a member and she could not have been happier. She spent hours wiggling and wiggling her tooth-she even had our children's minister try to get it out (thanks, Mr. Jeff!). Then finally, about a week and half after we noticed it was loose, she was working on it and she asked her dad to try. He gave it a tiny tug and it popped right out! I was relieved-I had no idea that I was totally disgusted by the idea of pulling out a tooth. I flat out refused to even touch it after I realized it was loose! 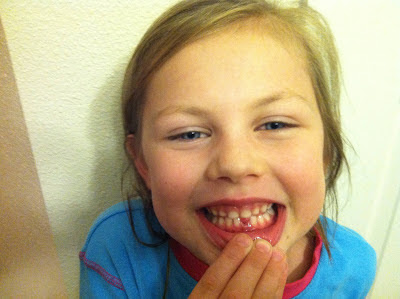 She was absolutely ecstatic to finally have it out! She danced and laughed and practically couldn't even go to bed. I knew such excitement deserved a little celebration. I had already discussed with Joel that I planned on doing the "Tooth Fairy". We don't do Santa, or the Easter Bunny, but for some reason, I just like the idea of the Tooth Fairy. I think because there is no spiritual association with losing a tooth-it is just all in fun, and doesn't take the place of Jesus. Whatever the reason, I was eager to make it fun! 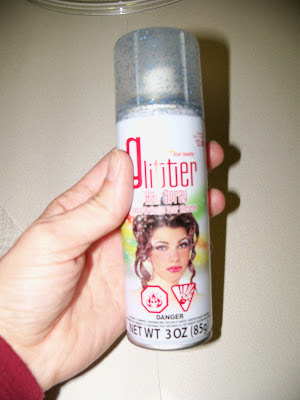 My dear friend, Kristan, suggested several months ago that I spray the money I gave Josie with glitter hairspray. It would make it sparkly fairy cash! Josie loves all things glitter, so I knew that would be a hit. Glitter hairspray is readily available this time of year, and it was only $2, so it was an easy and cheap way to make it fun.
However, I didn't want to just hand over the money. I scoured Pinterest for ideas and came up with a combination of two different printables. First I printed off this "receipt" (I thought it was funny that the blogger says they only do the Tooth Fairy, too!). I thought it was a good way to identify that the gift was from the Tooth Fairy. I sprayed the note with hairspray, too. 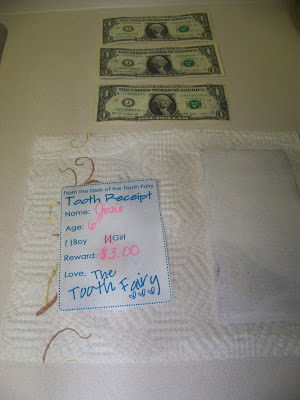 I randomly decided to give her $3, probably because I had three crisp ones handy. I figured that was plenty for a 6 year-old! I only sprayed the front of the money, mostly because I didn't want a big mess. I would suggest spraying outside if at all possible- the hairspray is sticky and I had to take rubbing alcohol to my counter top to remove it all, even though I covered it with paper towels. Also, the can says to spray "in short bursts" and you should do that. It makes the glitter more even. Anyway, I know you can't really see it in the photos, but Josie recognized that it was sparkly right away!
After I had my receipt all printed up, I was just going to put it in a plain envelope that I had sprayed, but I decided that was too easy. After all, it was only 11 pm! I needed something better. I found this adorable set of printables! It also includes a precious note and envelope for the child to leave their tooth in. However, Josie was in bed already, so maybe we will use it next time. Aren't people so sweet to share their lovely work for free with computer illiterate people such as myself? 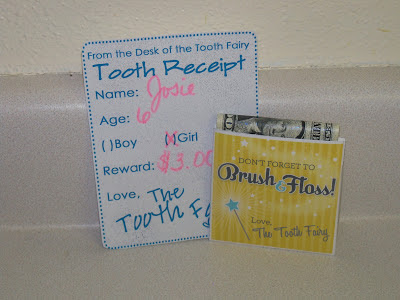 ﻿
﻿
I put everything together and left it on the counter where she would be sure to see it in the morning. I was pretty pleased with myself and anxious to see what Josie thought. I don't even think she was expecting anything, and she was just happy to have lost her tooth! 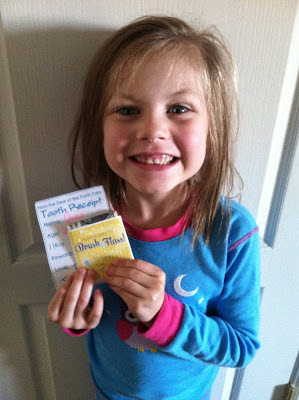 However, when my little sleepy head found it she was very happy! She was not fooled by my tooth fairy act at all,so there was no need to keep up the subterfuge. I think the tooth fairy will keep visiting, though, just because it was so much fun!﻿ And she will come back soon, because guess who has *another* loose tooth already?!
Contemplated by Clare at 9:40 PM