"P" is for Pretty 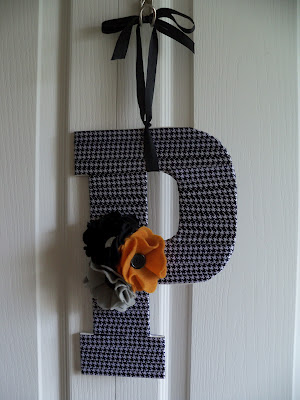 I hunted the internet over for a "back to school" wreath. I wanted something that wasn't specifically "fall"- because I do that all through November. I didn't want pumpkins-that's October. All I could find were dozens of crayon wreaths and ruler wreaths. The crayon ones would melt-my front door gets a ton of direct sunlight- and the ruler ones weren't really my thing. So, that left me to come up with something on my own!
My mom bought me a neat garden flag while I was visiting her last month that had our last initial on it. That got me thinking about trying something different. If you remember, the most recent baby shower I did I yarn wrapped the last initial of the family as part of the decorations. I decided to try something similar for my door. 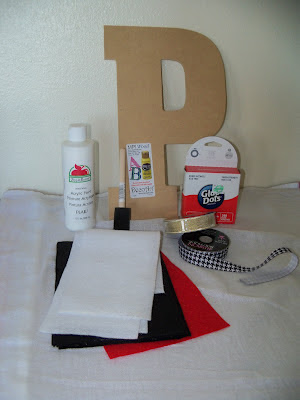 ﻿
Here is (roughly) what I used. I changed my mind on the colors- I decided to use gray and yellow instead of the red and white. Also, I decided against using the gold ribbon, and chose black. But you get the idea. You'll need:
-A wooden letter. I got mine at Hobby Lobby for about $4. I recommend buying one that is essentially flat, it will hang better and require less ribbon.
-Ribbon. I used 2 entire rolls of 5/8 by 12 ft ribbon. Again, from Hobby Lobby $3 for both.
- Felt in the colors you want for your flowers.
-Paint and brush, if you want to paint the edges. I realized later that I should have just used a Sharpie!
-Glue dots or a hot glue gun. I thought the glue dots would be neater, but I ended up needing to use my glue gun to get into the tight spots. 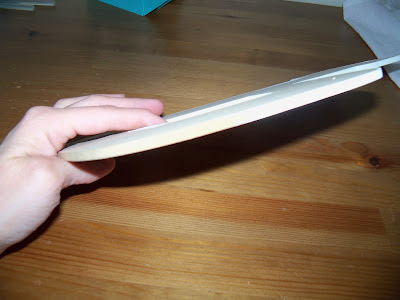 ﻿
It is hard to tell from this photo, but you will want to paint the thin edges of your letter. The ribbon won't cover these areas, so make sure you choose a color that coordinates. I realized later that using a black Sharpie instead of white paint would have worked just as well-probably better! Let it dry if you painted it, before you move to the next step. 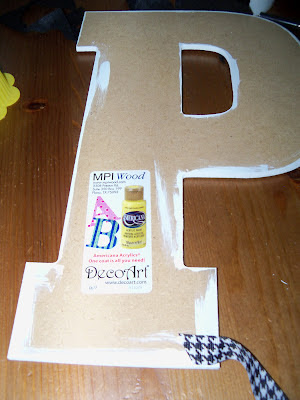 Attach your ribbon at the bottom of your letter. Can you see that I accidentally started on the wrong side? Be sure that glue your ribbon to the *back*, because you will want the front to stay nice! This is the part where I got distracted by crafting and forgot to take photos. Basically you wrap the ribbon around the letter, anytime you get to a curve, you can bend the ribbon and glue it, or cut it off and glue the end the way you need it wrapped. 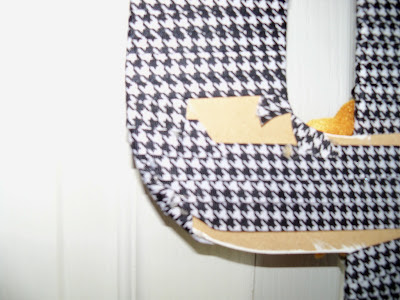 You can see the two different ways I wrapped it. In the inside hole, I cut it and glued it down so it covered the curve. On the outside edge I pushed the ribbon down and glued it. I think cutting it makes it neater, and if I did another one I would probably do all the curves that way. 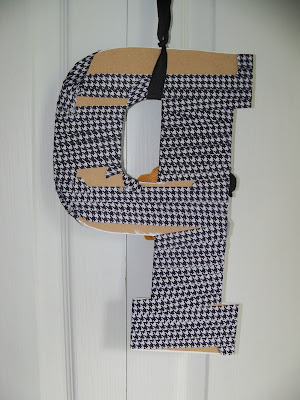 The back is NOT PRETTY! I wasn't worried about it though, it will rest against the door, so no one will see it. I overlapped the ribbon on the front, which causes it to skew diagonally on the back. If you want both sides to be equally attractive, you will have to do it differently. 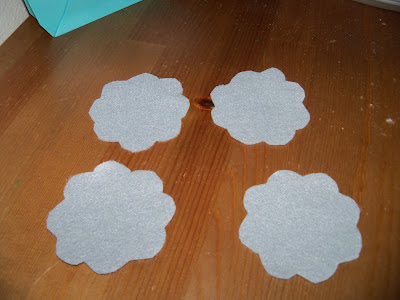 To make the flowers I cut four equal shapes from felt. I actually used a silicone cupcake liner as my template, but you can use whatever you want, just make sure your flowers have an even number of petals. 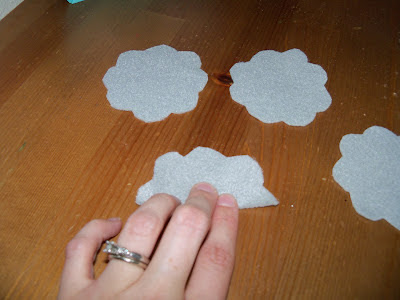 Fold one of the flowers in half. 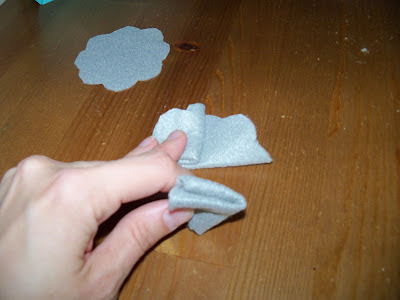 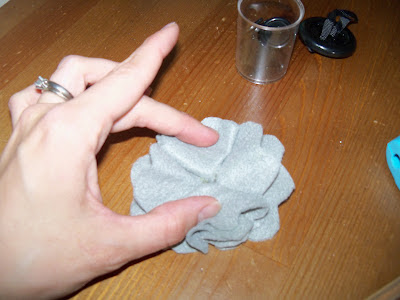 Then spread the flowers out in the middle, it will look somewhat similar to a box flower, but it will have more "fluff" on two sides. Then I sewed a button in the center of each one. You could easily glue the button, but I prefer to actually sew them. I can gather the flower a little more at the back to make it fuller. 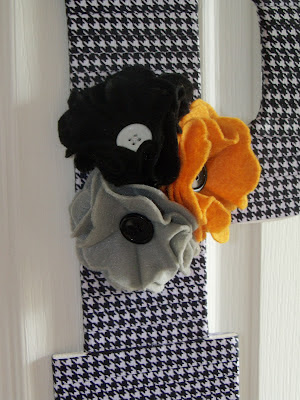 I set my flowers close together and basically formed a triangle out of them to make them stand up. I love the yellow, gray, black combination with the houndstooth. It looks fall"y" without being overt. 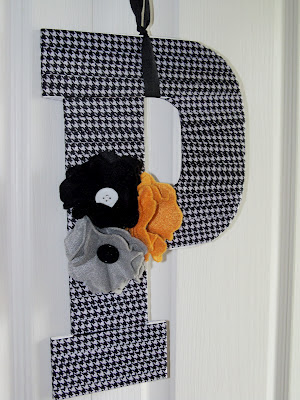 And that's it! I tied it with black grosgrain so I could hang it. I think once I take it off my door, it would look great hanging on the wall, too. ﻿
Contemplated by Clare at 4:03 PM