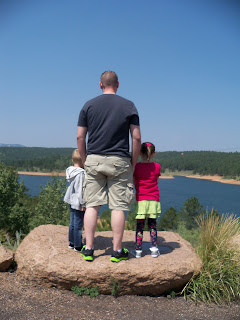 My dad taught me something wonderful, growing up, that you should always explore- not just places far away on "vacation", but where you live! Joel and I both love to travel, and we have gone many places nearby. However, when you have company from out of state, it is an even better reason to play the tourist in your own town!

Joel's childhood friend and his wife came to see us and we had so much fun going to all the typical tourist places. I took literally hundreds of photos over the course of the weekend, but I will refrain from posting them all! 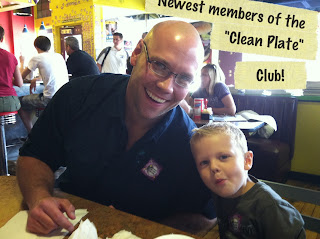 We started the weekend with breakfast at our favorite place-King's Chef Diner. It is a funny little dive that serves *the best* breakfast hashes and burritos. I love mine smothered in green chile. If you finish all your food (which is quite the feat, considering the enormous portion sizes) you are awarded a "Clean Plate Club" sticker, and a piece of candy. Carson was delighted with his treat- and Josh was pretty proud of himself, too! No sticker for me or Joel!

After breakfast we went up Pikes Peak. I get a little crabby about that, I won't lie. I hate that it is so expensive-it is basically the world's most costly toll road! At about $30 it isn't something we do all the time. I figured out that I have made 4 trips up there and I probably won't make any more if I don't have to. It isn't the cost, though. I get terrible altitude sickness! Compounded with my tendency to get motion sick, it is definitely far from ideal.

But, I have to agree, it is gorgeous, and if you aren't cheap and prone to a variety of (probably mental) illnesses, it is definitely something to see. I took the photo of the kids and Joel at the reservoir on the way up. It is a nature photographer's dream! 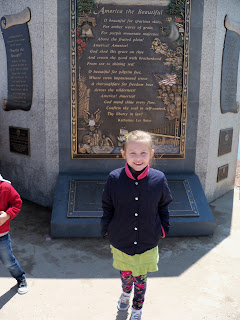 Do not be decieved- while it was 89 degrees and cloudless in the Springs, it was only about 48 and windy on the Peak, and it felt even colder! Of course, everyone knows, Pikes Peak was the inspiration for the song, "America the Beautiful." I can see why! 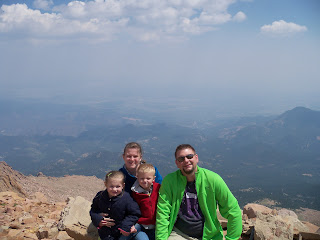 The views are endless, and absolutely breaktaking. I so wish that I did not get so dizzy and disoriented, I am sure that I would have taken even more photos. You can see for literally miles. 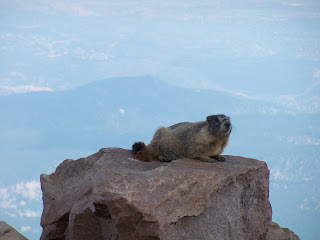 This little guy was quite photogenic. Everyone kept asking me what kind of animal it was. I replied "it's a marmot". I couldn't figure out why they kept asking. Later during the weekend, we figured out that they all thought I was saying, "it's a varmint"! They had never heard of a marmot! And an especially camera friendly one! 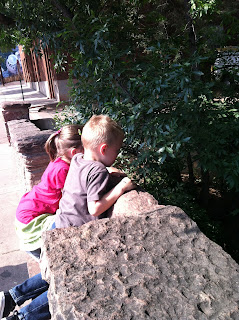 After coming back down the mountain, we spent some time in Manitou Springs. It is full of little curiousity shops and things. There are also some fun statues and the actual mineral springs that the town is named for. The kids were peeking at the creek below that flows from the springs. 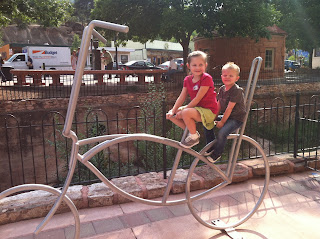 Everyone had fun posing on the enormous bike- clearly a bicycle built for two (or ten!). 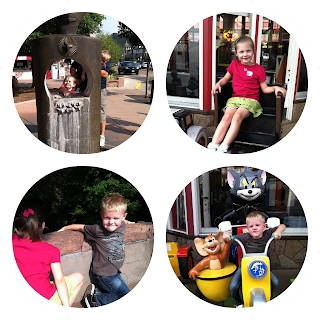 The kids had fun trying out some of the quarter rides at the arcade in the center of town. There are well over 25 different rides! They also enjoyed looking at the fountain that is from the springs-the water still provides health benefits supposedly, but I think it smells, so I wouldn't know! 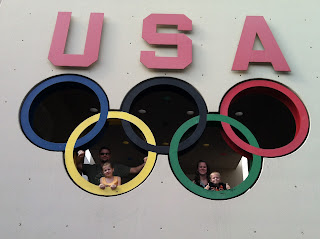 ﻿
On Saturday we toured the Olympic Training Center. It  had been years ago while I was in college that I had last toured it, and I had sort of forgotten about it (although it is really close to our house!). I got to thinking about it during the Summer Games, and was anxious to see it again. 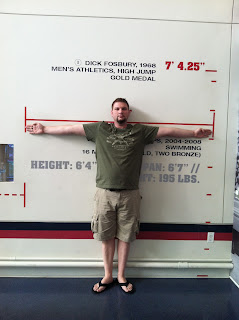 It is definitely one of the best free attractions in the Springs! We managed to make it to the last tour of the day, and even just going into the visitor's center is fun. We discovered that Joel's "wingspan" is the same as Michael Phelps- and they are the same height! I guess all that training really does make a difference..;) 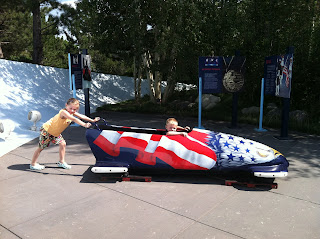 ﻿
The kids had a blast exploring all the exhibits and climbing in the equipment. If it hadn't been almost 90 degrees that day, the photo of the bobsled would have looked a little more realistic, wouldn't it?
Our tour was great, and we learned lots of fun facts from the tourguide, a resident athlete who is training in fencing. They also showed a great movie of highlights from the last Winter Olympics. I can't wait to see the Summer one! GO USA! 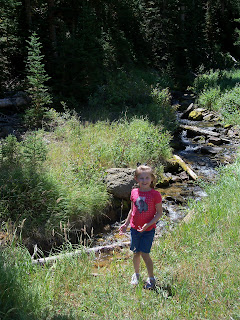 Later in the weekend we visited Rocky Mountain National Park. It is a couple of hours away from us, and we had never been. Let me tell you- it is G-O-R-G-E-O-U-S! Truly, Colorado scenery at its finest! 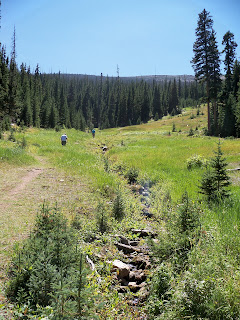 We did some hiking, the guys went farther up than the girls. Can you see Joel and Carson way in the distance? I loved the tiny creek that flowed over these rocks.﻿ 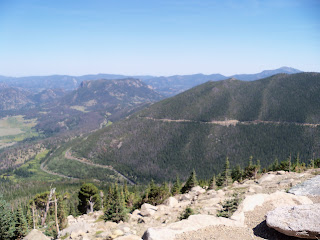 We drove through the entire park, and we were treated to many spectacular views like this. We saw the Colorado portion of the Continental Divide, which is kind of like the Four Corners- cool to say you have visited but nothing spectacular to photograph. I also purchased a nature guide and had a great time identifying the plants and animals. I am such a nerd sometimes!

It was a packed weekend, but we had so much fun. I always have fond memories of childhood trips when we do things like this. Joel has been so busy with school that having him around all day for a few days was wonderful. I think we are made some great memories as a family!