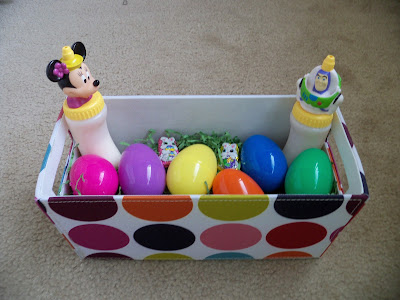 First, let me apologize for the poor photo quality. I have been having problems with my camera, and I am not quite sure how to fix them. If I stage the photo just right, and make sure I have tons of natural light, then I can usually get a decent photo. However, the nature of children is to be ever moving and never quite where you want them to be, so many of my pics lately have been less than perfect. One day, a DSLR. Today, problematic point and shoot....

Anyway, Easter fell right in the middle of some insane business in our house. It seems like I am always saying how busy we are, but truly this was out of the ordinary. I spent Friday finishing up JBF stuff (consignment sale) and then we babysit for some friends so they could go out for a birthday. Saturday we had an Easter egg hunt at church, which I got zero pictures of because I was manning the VBS registration table. Which, I also had to make clipboards for, did that on Friday too. Also on Saturday, Sarah and I were decorating for a baby shower. I spent Thursday, Friday and some of Saturday afternoon working on that. I am hoping to post photos soon, because I forgot my camera, but *thankfully* I had my snazzy new IPhone. I hope I got some decent shots! Anyone know how to do that?

So, all that said, (and by the way, Tuesday of that next week was Carson's birthday AND JBF drop-off, so still the craziness was not over) so I really wanted a low-key day. And I got one. It was wonderful. Joel picked up donut holes for the kids, and we surprised them with the basket above while they were still in bed. 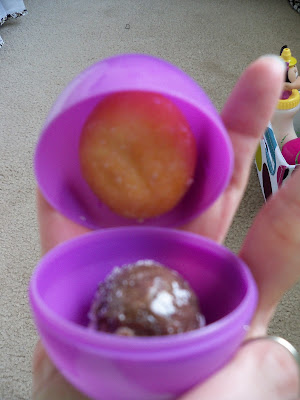 I filled large eggs with two donut holes each. I call those preschool eggs because they are just perfect for toddlers. I like to keep them on hand, in case I have something bigger that I want to put in an egg. In this case, it was breakfast! 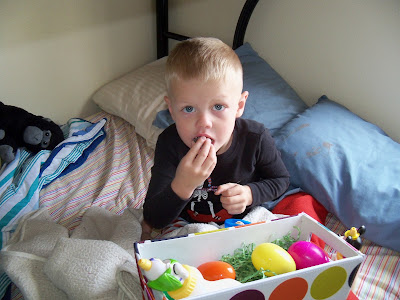 They loved it! They both love donuts, but they had never had donut holes before. Besides, having breakfast in bed is always a treat. 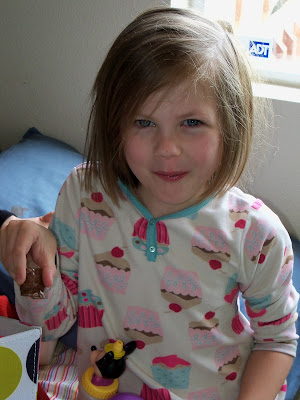 I may have snuck a couple of chocolate rabbits in there, too. Jocelyn always loves candy, but especially at breakfast time! 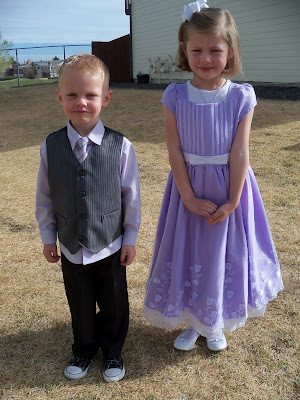 Of course, church was on the agenda. I was running the VBS table again, so we had to be there early. This photo so reminded me of "American Gothic". Jocelyn is definitely not an early bird, and the sun shining in her eyes wasn't helping! 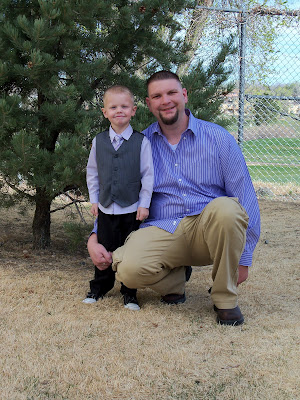 I did get this adorable photo of my two best guys. Carson has black dress shoes, but I couldn't resist pairing his Converse with his outfit. He is such a little hipster! 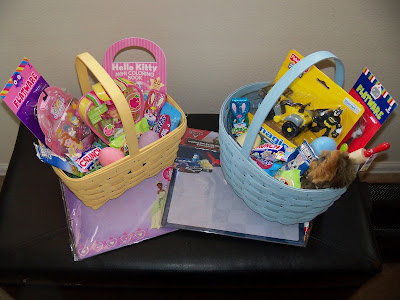 After church we skipped the traditional ham dinner in favor of Qdoba. I was pretty much tapped out from all the busyness so I couldn't even think to plan something in advance. I am so blessed to have such a great family that doesn't care about those things. It also gave us time to just relax together. And stock Easter baskets. 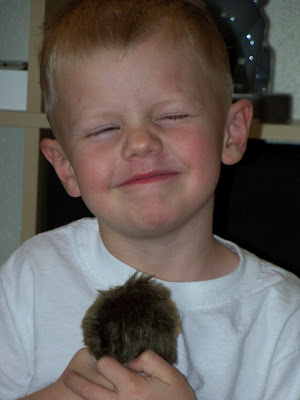 The baskets are always a hit, but "Baby Chewie" was Carson's favorite. When I saw the tiny stuffed Chewbacca at Target I couldn't pass it up. And I am glad I didn't! 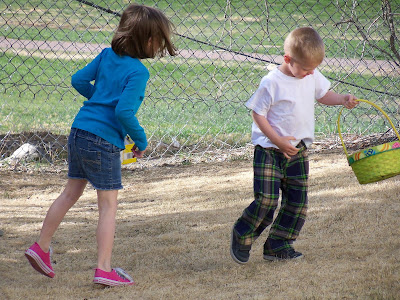 I won't lie. It pained me to let them hunt eggs looking like this. The perfectionist in me wanted to send them to change clothes-preferable something spring colored with a collared shirt for Carson and something not so short for Josie. But I am trying to battle that OCD so I let them hunt eggs looking like homeless children. In mini skirts and pajamas. Ugh. Jocelyn is checking to see how many eggs Carson has found. 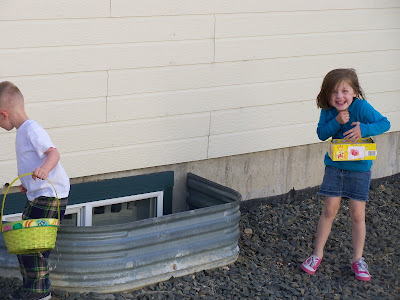 They were as adorable as ever. We mixed all their eggs together (Usually I separate them into sections, so they each get their own dozen eggs) and it actually made it really fun. They didn't even fight over who got the most eggs. I love those kids. 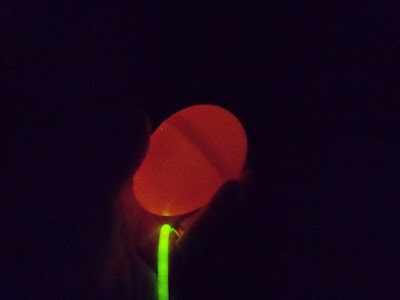 The surprise hit of the whole day was the glow in the dark egg hunt. I had briefly glimpsed a photo on Pinterest of a glowing egg. I assumed (correctly, I found out later) that it was activated glow sticks in eggs. I took glow bracelets from the Dollar Store and shoved them in light colored eggs. 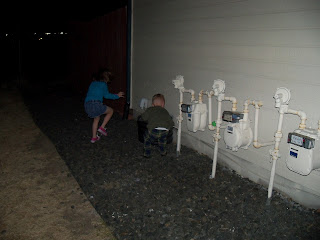 They loved hunting eggs in the dark! I didn't even put any candy in them, just the bracelets. We didn't give them flashlights, so the eggs were actually pretty hard to find, but in a good way. 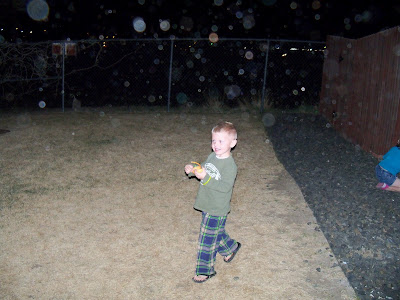 My camera doesn't like the dark. I have no idea why it looks like it is snowing in these photos. Carson's outfit just keeps getting better doesn't it? Loving the flip flops. Oh well. Anyway, the glow in the dark egg hunt wrapped up our night. It was a really nice day. 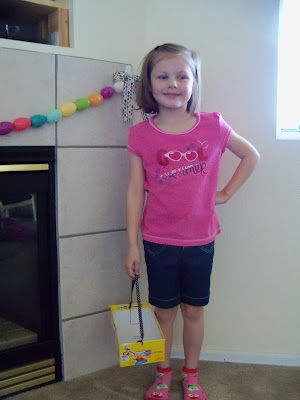 One last photo. Jocelyn's egg hunting basket (I don't let them drag their Longabergers around the yard-those are keepsakes!) got broken after the church egg hunt. I was a little frustrated with her. She proceeded to make her own basket! It was so cute. She decorated a shoebox all on her own and tied on some ribbon she found. She was so proud. I loved it. She is such a little artist! Glad to see that creativity isn't necessarily genetic...
Contemplated by Clare at 9:36 AM