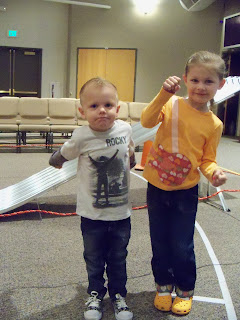 This year Josie and Carson started attending Awana at a different church. We had attended (and I had taught) on post at the chapel for the last three years, but with Joel getting out it was time to find a new program. We absolutely love the new one! It is huge and does a lot of the things that our smaller club couldn't do. One of those things is the Awana Grand Prix. Josie got into the spirit of things by pretending to "drive". 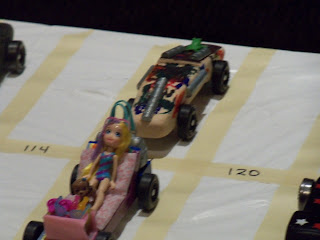 This is Carson's car. Neither car was the prettiest, nor the fastest, but they both enjoyed coloring them. Next year we will do paint, but we didn't have time to make them too fancy this year. 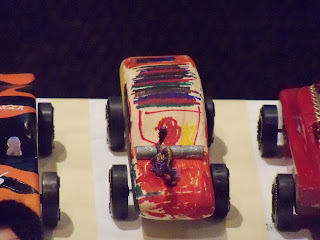 This was Josie's. There was some pretty stiff competition in her division. Fortunately, I think it was the dads who were the competitive ones, the kids just wanted to have fun and enjoy looking at the cars! 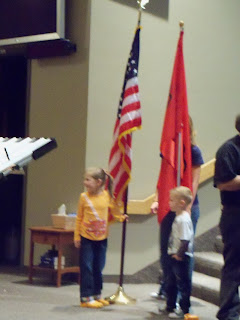 Josie and Carson were thrilled to be asked to hold the flags for the opening ceremony! We were a little nervous about them touching the ground, but they did just fine. 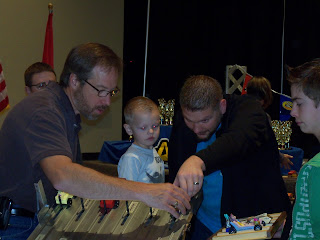 Each racer was allowed to place his or her car on the track for each heat. There were three heats, and for Carson's division there were five groups. For Josie's there were eight! 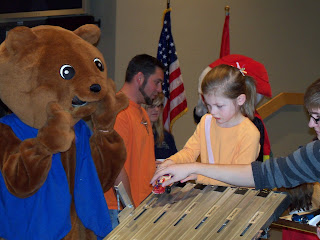 Josie got some encouragement from Cubbie Bear while placing her car. 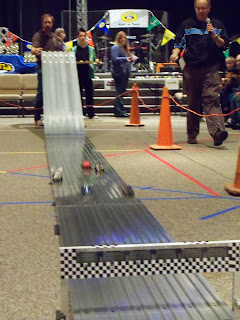 And their off! The race was so quick you couldn't hardly see the cars. 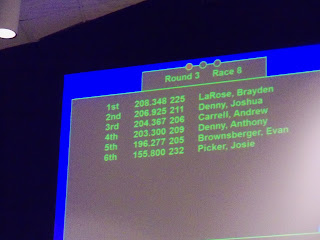 The whole thing was very professional, with a digital track and scores posted electronically on the leaderboard as soon as the last car cleared the finish line. The speeds were translated into miles. Josie's car was one of the slowest ones, at 155 mph. The fastest car in her division went 214 mph! Carson nor Josie won, but they did have a good time. I am little frightened at the amount of "ideas" Joel has for next year... 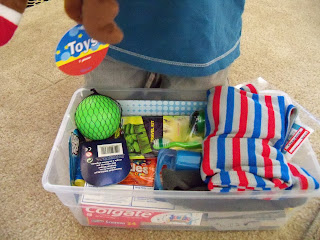 Later on the kids packed their shoeboxes for Operation Christmas Child. This is without a doubt one of my favorite holiday traditions. I packed my first box at age 13, and I haven't missed a year since. 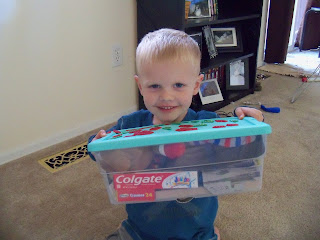 Carson had a little trouble figuring out why we were buying gifts for someone he didn't know, but once he understood, he really got into it. He tried to buy everything in the store for his "friend". He really wanted to send his friend a ball, and he hand-picked the stuffed moose he sent. It was very sweet. 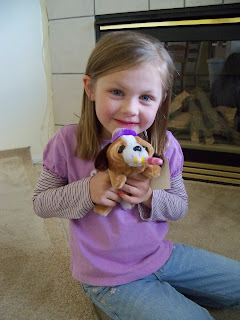 Jocelyn was so cute. She wanted everything to be just perfect for her box, and in the end it was so full it would barely close! 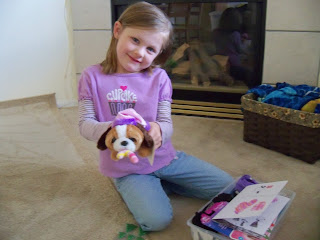 She specifically wanted to put flip flops in her box. I am so praying that some little girl in a foreign country has turquoise flip flops on her wish list. And a stuffed puppy. 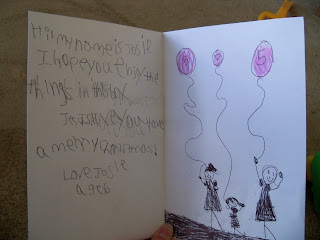 She drew the sweetest card to put in her box, I had to take a picture. She really loves doing it as much as I do.

So that is just a little of what has been going on here. We have been busy, busy as usual. I don't think it is going to get any slower with the holidays coming. I guess I better just resign myself to it at some point that this is normal!
Contemplated by Clare at 9:57 PM