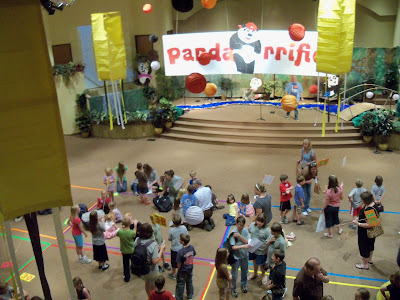 Well, the VBS craziness started the first full week in June. I volunteered back in February to co-direct the Vacation Bible School at our church. I have taught for years, but this was my debut in a directing position. I really was more like assistant, but everything went well and I would like to think I had a teeny tiny part in that. We had a ton of amazing help, and as usual, everything came together in the 11th hour so that it was a success. One of my personal favorite things was the huge paper lanterns that our decorating team put together. They are at the top of the photo above. 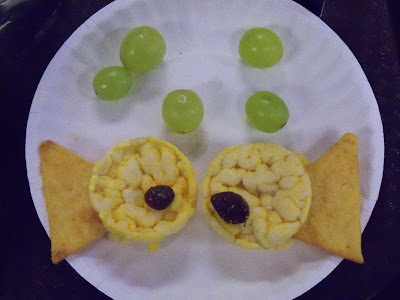 Every VBS we have participated in this summer has been the Pandamania curriculum by Group Publishing. I am a hardcore Lifeway girl, but we made the best of it. There have been some highlights (the curriculum is really easy to use) and I have to admit that I love one particular aspect: the kids make snack each day. A different group of kids made snack for the rest of the children each day. Jocelyn's group (kindergarten and first grade) made the snack above for the day they studied Jonah and the whale. Cute, huh? 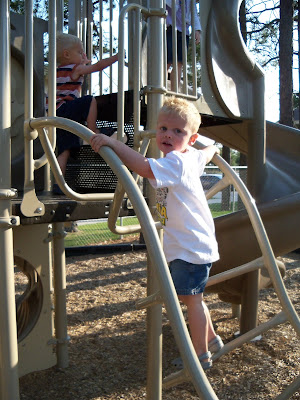 Carson was still in our nursery this year. He will graduate to pre-k and that will make him deliriously happy. He was disappointed he was not in "Josie's class", but he did enjoy all the playground time his group got. 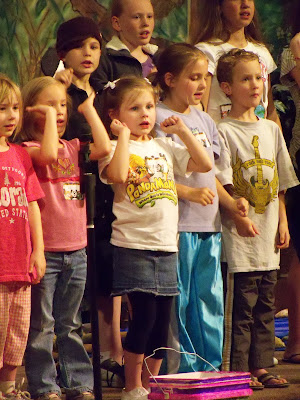 Jocelyn was invited to help lead worship on stage. She was delighted as she loves the spotlight! 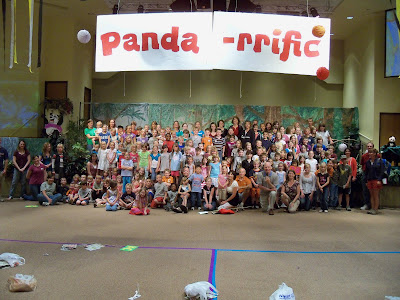 This is the majority of our VBS. I thought it was a really great idea to get a total group shot. 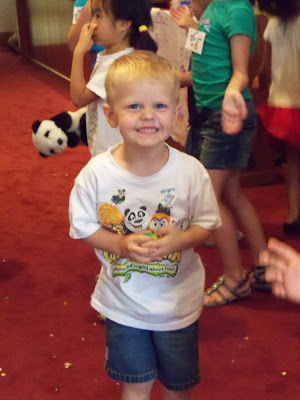 The very next week we did VBS at the chapel on post. Switching from night VBS to a morning one is a little bit of a challenge! However, it was my second year to lead "Chadder's Theater" (one of the rotation classes where the kids watch a video segment and discuss God's work in their everyday lives) so it was pretty easy. Carson was able to be part of the preschool class there- see how much happier he is? 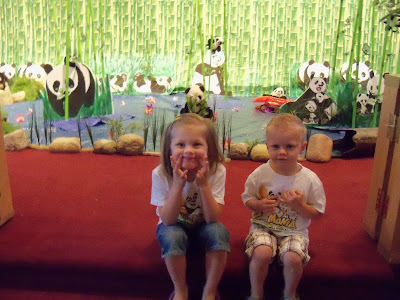 The set designers at the chapel always do a really great job. This year's theme wasn't quite as fun as other years (it was pandas-just pandas, not China or Asian, or anything besides just the bears) but they still made it look good. 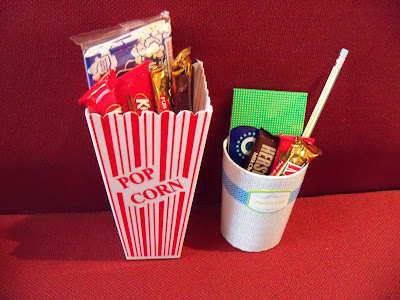 A great idea that I stole from my sister is "thank-you" happies. I made one for each of the kids' crew leaders, with little notepads, pencil cups and candy. Then for the chaplains' assistants who ran the video for the theater, I made little popcorn cups. I figured they deserved some movie snacks after sitting through the same cheesy video four times each day! 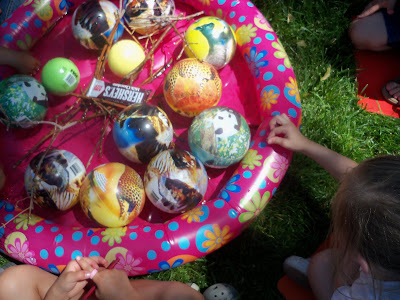 This week we are doing a mission VBS with our church. We are at a trailer park full of underprivileged kids. We are doing a lot of creative thinking because we are not in our home environment and these kids aren't your usual regular VBS students. This is part of the "altar" that was a visual aid for today's Bible story about Elijah. I know it looks strange, but offering up candy as a sacrifice is pretty meaningful to kids! 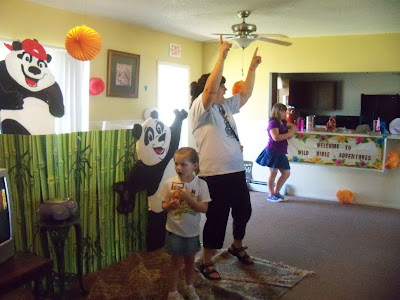 Jocelyn got roped into helping with the singing again. She had a little too much time off and forgot some of the motions, but she gave it her best shot. 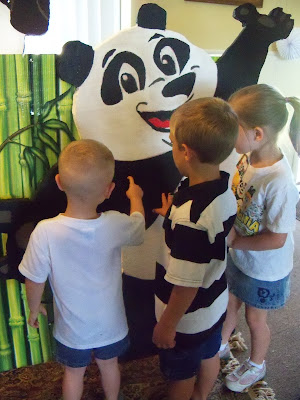 The kids are doing well, and I am glad that they get a chance to see that everyone doesn't have the same kind of life they do. The school district provides lunch for the kids every day because many don't have enough to eat. One of the kids had a pretty rough day because his house was broken into last night. There are little five and six year-olds who come by themselves because they are used to taking care of things on their own. It is a little heartbreaking, especially since we live in such a prosperous area. However, I am glad that I get to have a part in ministering to these kids.

Since I am officially in my third week of PandaMania, I think the kids and I now officially qualify as PandaManiacs. Don't you?

Contemplated by Clare at 4:10 PM