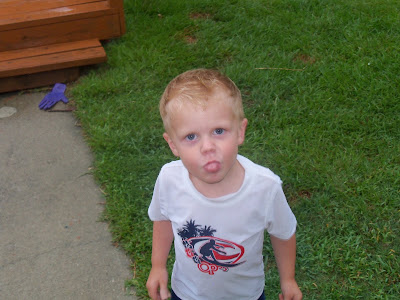 I realized that I started posting our vacation photos terribly out of order. So, I am just going to go with it. I don't figure that any of you really care how accurate the timeline is! I love the "big events" of a vacation, like travelling to the beach, but my favorite parts are the sitting-around-doing-nothing-important ones. The kids had a ton of fun just being together,too. One of the things that Joel and the kids loved is that it rained quite a number of days while we were gone. Here the rain is very brief and usually accompanied by thunder and lightening-not suitable for playing in. There, my kids had the chance to enjoy being outside. 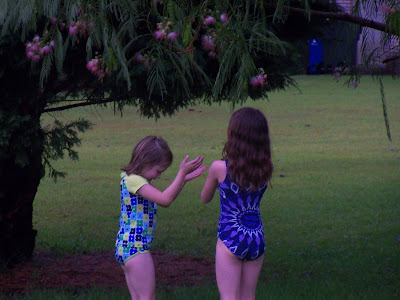 The girls thought it was hilarious to stand under this tree and get dripped on. It wasn't raining very hard, so the additional water just added to the fun. 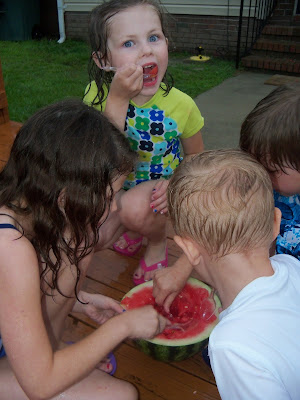 Why, you may ask, are our children clustered around a half of a watermelon, outside, eating it with spoons? Well, the short version is: we were leaving for the beach and my sister asked Gideyon (her son) to carry this leftover watermelon down the edge of their property and throw it into the woods. Immediately, all the kids asked if they could just eat it instead. We decided that it would be fine, since they were all outside. 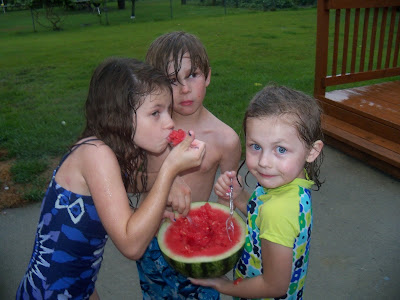 I guess playing in the rain made them very hungry. They managed to destroy half a watermelon between four little people. They started standing up, but eating slippery, sticky melon in the rain isn't the easiest thing. 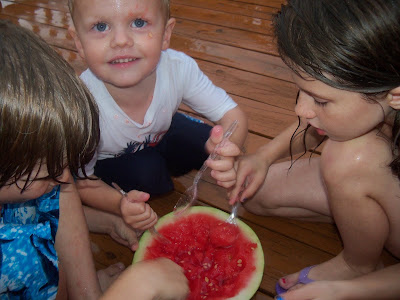 They switched to the deck, and Carson joined in on the action. He doesn't even usually eat watermelon, but I guess the allure of enjoying al fresco straight from the rind was too much to resist! They were just so cute and excited about it, it was sweet. 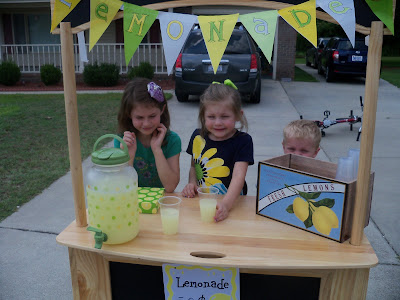 On another day, they all set up a Lemonade stand. Gillyan had done one earlier in the summer with great success and she was anxious to try it again. My sister, who does everything so well, of course managed to find the adorable stand for $25 and magically produced all the matching accessories from various places around her house. A little disgusting isn't it? The banner and sign were from the Dollar Spot at Target! How cute is the whole thing? 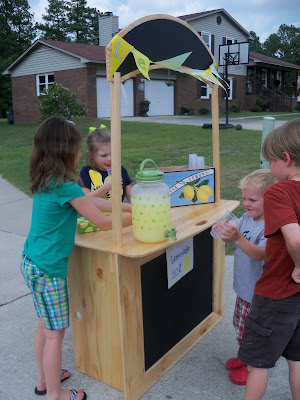 Of course, the little entrepreneurs were also the first customers. I am surprised they had any to sell at all. However, true to the reported nature of Southerners, all the neighbors were as kind as could be and after quite a bit of patronage, the kids came away with over $40 for a few hours of work! 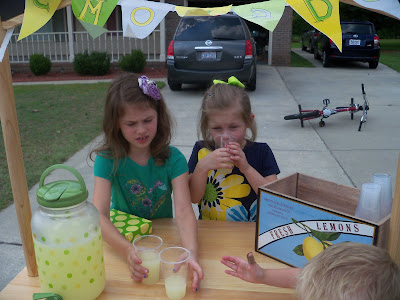 It probably didn't hurt that they are all adorable and it was hot enough to boil an egg on the sidewalk. I was impressed with their perseverance and after a couple of $5 "tips", I am considering opening a lemonade stand! They put their earnings towards fun things on our trip to Busch Gardens. No worries, I will post pics soon!

Contemplated by Clare at 9:19 AM