I know I am a little late in posting this, it seems like everyone else had their post up on the 14th! However, better late than never. I have been working on a photo book for the last couple of days ( in the midst of unpacking and a million other things that have demanded my time in the last week) and this was a little lower on the priority list! However, the big V-day wasn't. 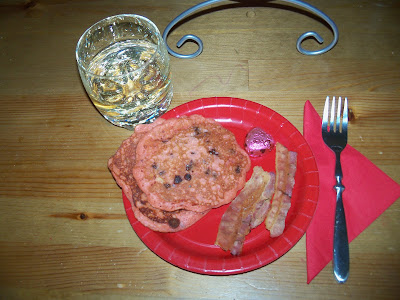 I decided, after seeing a $3 package of pink chocolate chip pancake mix at Wal-Mart, that I could do that myself for cheaper! They turned out great, it is a little hard to see in the photo, but the kids loved them! They really were a beautiful shade of deep pink. It was easy, I just added food coloring to the water the recipe called for, making sure that I didn't increase it at all. It took about12 drops of red to make my 12 small pancakes pink, but it was totally worth it. The kids really loved the little piece of Dove- candy for breakfast was extra special. 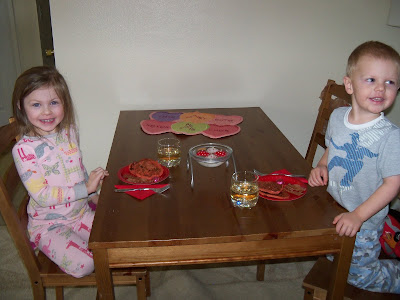 I made sure to set the table all pretty. My girly-girl noticed it right away. We can't light candles around Carson, though. He thinks everything is a birthday candle and immediately blows it out! 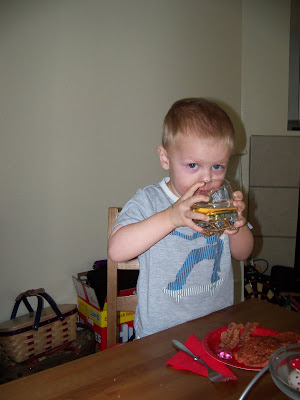 Another special touch was sparkling cider in "real" glasses. My mom always had sparkling cider on special occasions and I love carrying on that tradition. Between the kids and I, we consumed a whole bottle for breakfast! Like the unpacked box in the background? Well, I can unpack any day, but Valentine's day comes but once a year! 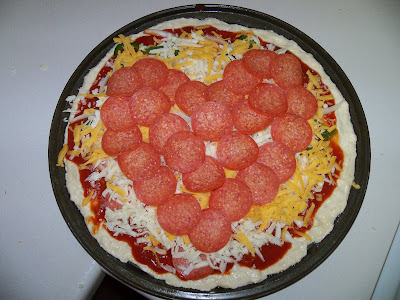 We had purchased Papa Murphy's heart-shaped pizza in the past, but Joel especially loves my homemade pizza. I thought about being crafty and trying to shape the crust, but in the end I decided to just stick with arranging the pepperonis. This is the one for the kids. 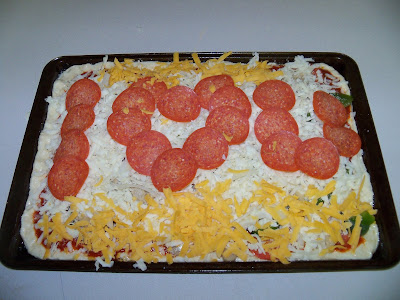 And this is Joel's. He loves his pizza in a rectangular pan, so I don't think he would have been that impressed with a heart shaped crust, and I probably wouldn't have pulled it off very professionally! It took him a minute to figure out what I was showing him. We don't exchange Valentine's gifts, mostly because of my birthday and our anniversary, but I like to do little fun things for him. He surprised me with a box of chocolates, so this was his little happy. Especially since I really wanted to do the BOGO at Qdoba's... 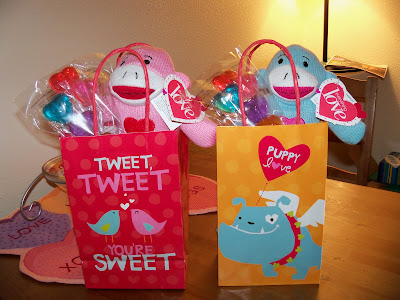 We had a really busy day, lots of errands to run, so we decided to wait and give the kids their Valentine bags at night. The kids always get a "stuffy" for Valentine's and I couldn't resist these matching sock monkeys. So cute! 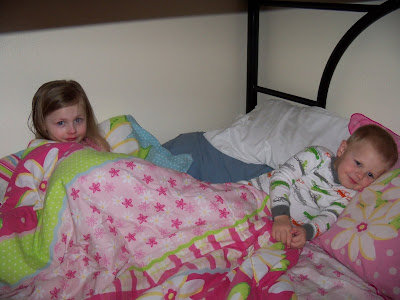 They didn't know we had presents for them, but we sent them to their room to wait. They both decided to snuggle in Carson's bed. Now that they are sharing a room I am on the lookout for gender neutral bedding, but obviously it hasn't happened yet! 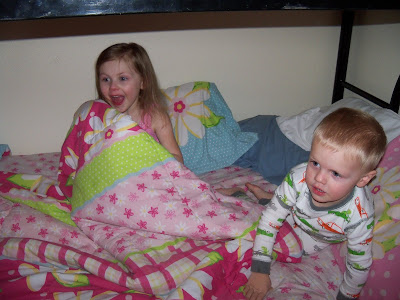 They were so surprised when Joel walked in with the bags! I love how simple things bring them such pleasure. 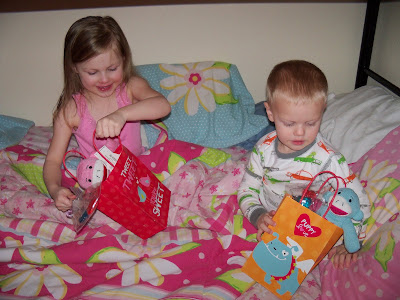 Attacking the gifts! They each got a sock monkey, a little box of chocolates, a lollipop bouquet (another tradition) and.... 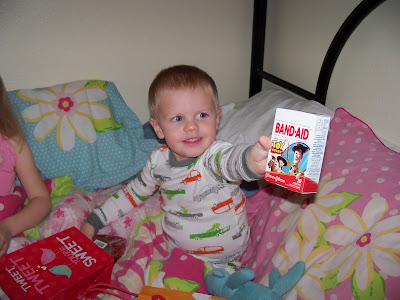 Band-Aids! I don't keep fun Band-Aids for scrapes. Band-Aids are for when you are bleeding, and plain ones serve fine for medical purposes. Besides, my kids think the cartoon ones are stickers. So believe it or not, they were really excited to get their own box of Band-Aids to do whatever they wanted with. Carson was very eager to show off his "Woody and Buzz Yiteyear" ones! 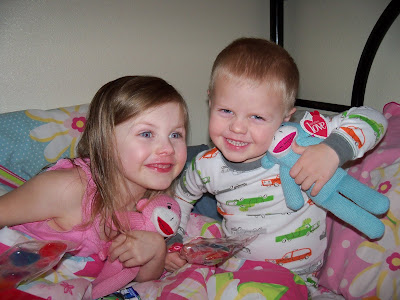 They fell in love with their monkeys. Josie named hers "Rosie" and Carson decided on "Blueberry". They have slept with them every night. It makes me happy.
So that was our little Valentine's day. I love having it so kid-centric for right now. Joel and I have been really good at making sure to have a date night at least once a month, and as neither of us is especially romantic, celebrating as a family is a perfect fit. These little guys are the best Valentines anyway, gotta love those faces. I hope you had a wonderful Happy Hearts day, too!