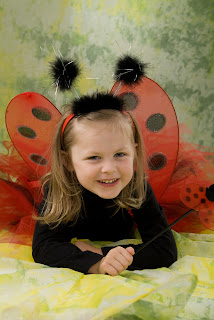 We started off the week with a fun costume photoshoot with our friend, Patti, of Inspired Studios.
She did such a fabulous job! Even though the kids were all dressed up, she caught their personalities, not just their adorable smiles. I posted quite a few of these photos on my Facebook page, so I won't put a bunch here to bore you. 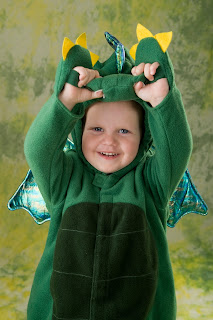 But I couldn't resist a couple. They are just so stinkin' cute! 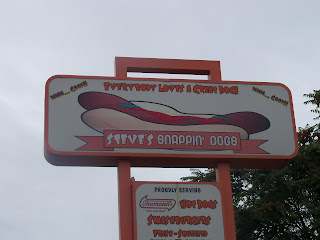 Joel had Tuesday off (he had to work a 24 hour shift Sunday and missed the Monday holiday, so he was given Tuesday). We were having cool, wet, wonderful fall weather. We decided to make a trip to Denver and stopped for lunch at this great little hotdog place. 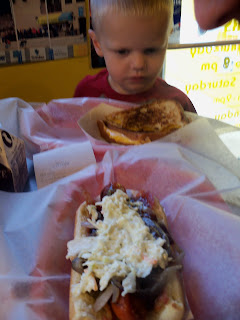 They had a really great menu of hotdogs and both my kids chose to eat...grilled cheese! I was not passing up a hot dog opportunity, though. I love me a good dog! I had a traditional Chicago dog. Joel tried the Atlanta dog first, it had coleslaw and chili-sounds gross, tastes great! Then he tried a Memphis dog, the one above. It had bacon, coleslaw and bbq sauce with onions and bell pepper. They also had AMAZING chili cheese fries. I would go back just for the fries.... 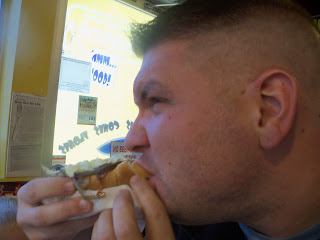 Joel enjoying his hotdog. The Atlanta dog was fabulous, I even liked it better than the Chicago dog! If you know anything about me, that is saying a lot. 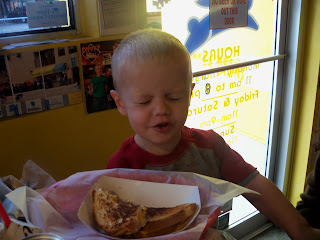 Carson exclaiming over his sandwich. Notice the absence of fries? He likes grease drenched potatoes almost as much as I do. He ate all his fries and some of his sister's! 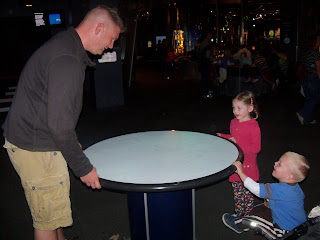 After finishing lunch we headed over to the Denver Museum of Nature and Science.
We were excited to go there for the first time. We had heard good things about it and it turns out they were true. We started out in the Astronomy area. 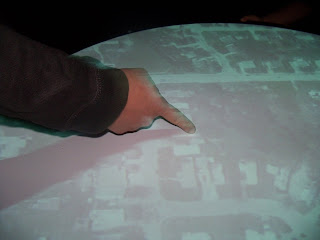 The picture above this one is of the really cool map thing they had. As you twisted it one way or another you could zoom into a map of the whole world! It was super detailed (just like Google Earth, if you have ever used that) and above Joel is pointing to our house! Crazy, huh? 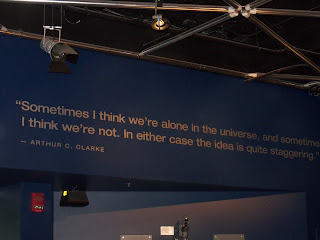 I really liked this quote. I really don't think the author is talking about God, more about aliens, or other "lifeforms". I don't believe in those, but it doesn't matter. The universe is staggering-God's creation is beyond amazing. 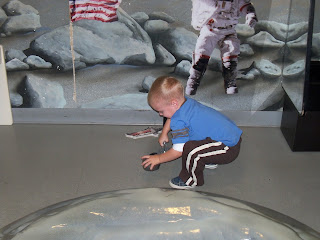 Both of the kids enjoyed the various preschool play areas. This one was dedicated to space. Carson had a terrific time trying to pick up "moon rocks" and put them in the "moon crater". 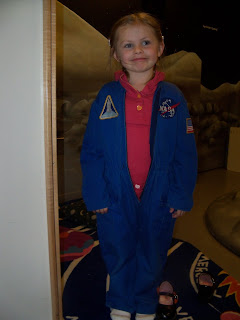 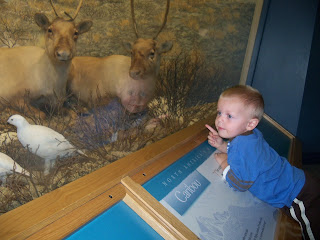 Carson loved all of the animal displays. He made up a story for each one and acted like a little tour guide. I loved them because, unlike the zoo, each animal was perfectly photo-worthy and there was no smell! 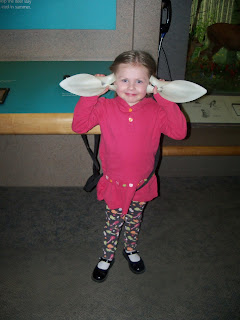 Jocelyn learned that deer ears function independently (like satellites) and she looked adorable trying them on. 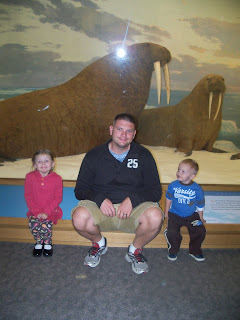 Joel's favorite was the walruses. We had no idea that they were so big! 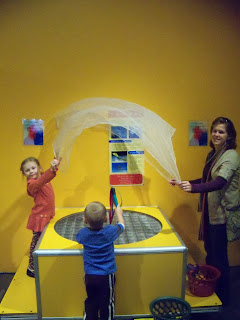 Both of the kids loved the Discovery Zone area. This was a really fun high-powered fan that they could use to move scarves, whirlygigs and pinwheels. 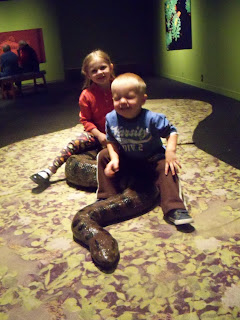 They had an exhibit on the Amazon. This huge boa constrictor looks amazing real, doesn't it? 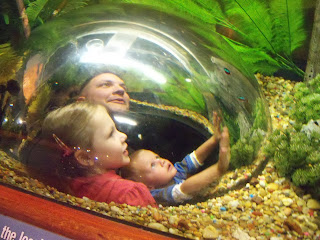 There were several fish tanks in that area as well. Aren't they so sweet all squished together in that bubble? 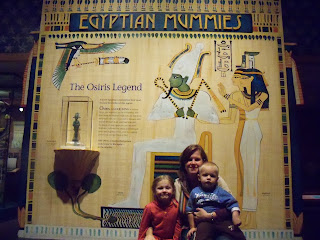 My favorite part was the Egyptian area. I looooove anything related to that period. Jocelyn also thought it was cool, since she knew about many of the things from VBS this summer. 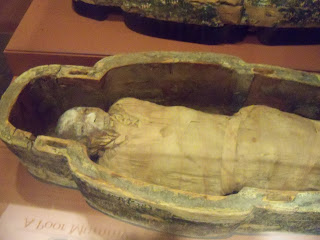 I am absolutely fascinated by mummies. You can see this woman's face through her wrappings. I could have stayed in that room much, much, longer but the kids and Joel were starting to get a little creeped out. When we went on our cruise last year, we went to a cemetery in Mexico that was a highlight of our trip for me, and the graves in New Orleans strongly appealed to me. I think that is when I realized I have a morbid fascination with...morbidity! Even as a child I constantly borrowed a book about mummies from the library. So yes, I had to be dragged out of this room. I spared you the rest of the photos I took. 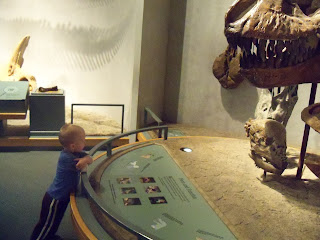 Carson's favorite part was the "fine-o-saurs". He wandered around with his neck craned trying to take it all in. He kept roaring and growling. I am sure he would have climbed into the exhibit and kissed them if he thought he could have gotten away with it! 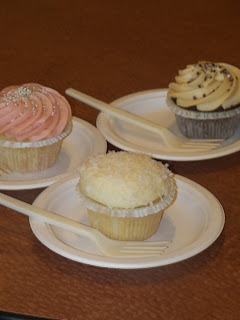 We ended the day with a trip to the sweetest little cupcake bakery. If you follow Bakerella at all, then you might have caught where she took a trip to Denver. This is the "Lovely Confections" bakery that she visited! She tried the honey and lavender cupcake called the "Bees' Knees" but I wasn't feeling that adventurous. I tried the "Salted Caramel Chocolate", Joel chose plain 'ol coconut and the kids shared a strawberry and vanilla one. Aren't they beautiful? And I HATE sprinkles, but they were so pretty on these! I feel like a traitor for saying that, but they were the prettiest sprinkles I have ever seen. And we got to meet the owner, just like Bakerella! 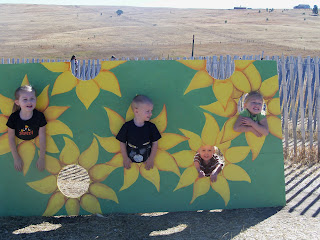 We hung out at home on Wednesday, after all the excitement of Monday and Tuesday. On Thursday we had Bible study (which I am absolutely loving!) and Awana. Then on Friday we were able to go to the pumpkin patch with some friends from church. Don't our kids make precious flowers? Do you like how my son is trying to climb through the cut-outs? Never content to be ordinary, that one! 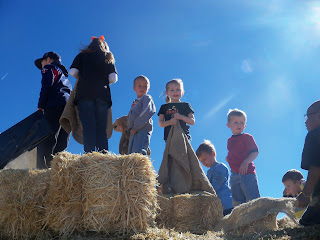 There was lots to do there. Both of them loved the hay slides. Josie had to go down "the big one". She waited so patiently in line. And had such a blast she did it 4 more times! She helped her friend, Bailey, go down to. And it was a pretty tall slide. I was standing on the ground when I took this shot. 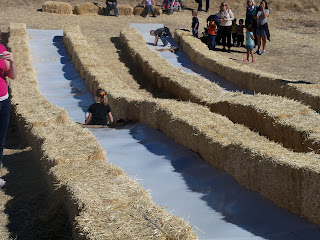 There she is on the way down. I thought she might be scared but she was smiling the whole way. I took about 200 more photos (yes, really) but this post is already long enough. If you would like to see more of anything just email me! Just kidding... except for you, Mom. We had a great week. I will post about our trip to the other pumpkin patch another day. I don't think we could have packed another fun thing into this week! I think all of this is why I love fall so much!

Contemplated by Clare at 4:54 PM