So Fun, It's Almost Criminal!

Joel and I have had the opportunity to celebrate only a few of his birthdays together. He has been deployed to Iraq for two and in California training for one. Due to various other occurrences (and excuses) I have never thrown him a "real" birthday party. His big 3-0 was last year and since he was still deployed, I tried to make it special but I wanted to make up for it this year. My mom had thrown a great party for my sister, Katy in February for her 18th birthday. She let me in on a little of the planning and I thought it sounded like so much fun I decided to copy it! (Remember me saying I steal all my best ideas? Yep, don't ever tell me about something fun you've done because I truly believe imitation is the highest form of flattery!)


The idea was, a Josie kept saying over and over, a "murder mystery dinner party". The concept is simple: you use a kit that has 8 character parts, invite the guests, assign the parts and while dining you trade information that allows you to discern who "killed" an imaginary guest (not one of the people you invited). Execution is an entirely different story!


I am definitely NOT spiritually gifted with hospitality. I am such an obsessive perfectionist that it is not usually enjoyable for me to have people over. I realized earlier this year that was not an attitude that pleased the Lord. Refusing to have people over unless my house could pass a white-glove test (ummm, which is *never*) did not honor Him. I decided to try to be more open. I felt that having a party for Joel would be a good place to start.


We have several couples that we absolutely LOVE spending time with so I felt like they would make for the perfect guest list. The scripts were written for 4 guys and 4 girls so it worked out great. Also, our group is pretty low-key so I thought having a more formal seated dinner would be a nice change of pace. I had a great time purchasing matching plates, napkins, etc. and everyone got a kick out of the fake silverware and plastic wineglasses-complete with wine charms! Candles and flowers completed the setting and we even opened up several bottles of bubbly-sparkling cider that is.:)


Everyone came in costume-although the setting was modern, so that made it easier. We exchanged introductions of our characters and enjoyed all four scenes. We split those up between: appetizers/"cocktails", salad course, main course, and dessert. I made my Aunt Rachel Dawn's famous cheese dip and had some other finger foods (or actually cocktail toothpick foods, per Joel's request) and also homemade manicotti and from-scratch key lime pie. As someone who does not usually brag about her culinary skills I was pretty pleased with myself! I didn't take a ton of photos, because I was not only the hostess I was a character. I allowed all the guests to chose their characters and Joel and I took the remaining two. I ended up being the "murderer"! That gave me even more work to do.


Everything turned out great. I was bummed that I didn't get a photo of any of the food, or more of the guests. We had a terrific time, though and I think someone in our group will host another one sometime soon. I just hope I get a better part this time. I think all in all it was a successful weekend-Joel's actual birthday was on Friday and he went to the movies with a friend and then we had dinner at a teppan-yaki grill. We finished the night with iced coffee and gifts! Lots of new clothes for him, as well as a new video game and season of his new favorite show "Leverage". Josie's special gift was the Lego set. Then we partied on Saturday! I think we made some wonderful memories and I don't have to plan another party now until he turns 40...:) 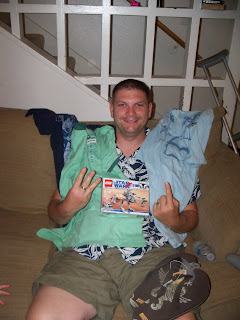 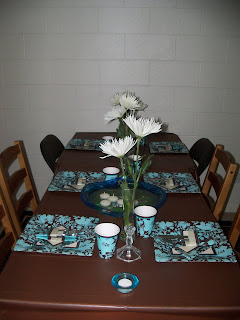 The table before the party. 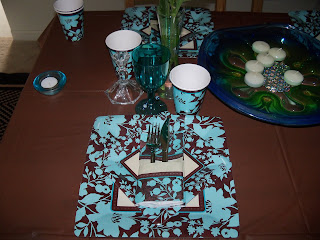 The place settings. I folded the napkins all by myself!:) 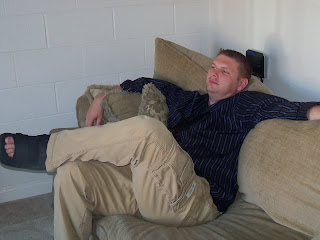 Joel relaxing before the pary. No stress there! 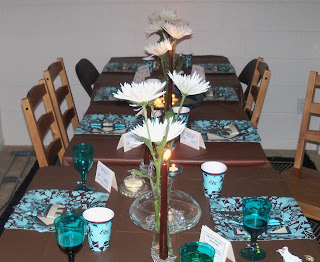 The finished product. I love floating candles and flowers! 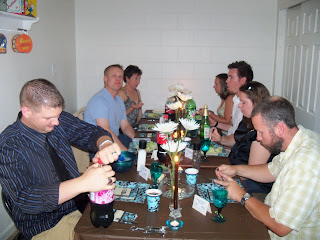 All the party guests. Except me, I am always behind the camera! 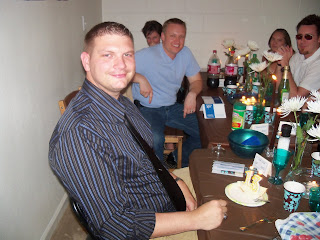 He may or may not have rearranged his candles to suit his liking.
Contemplated by Clare at 2:36 PM