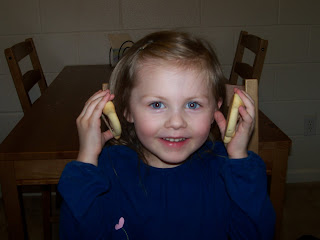 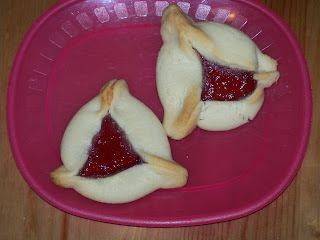 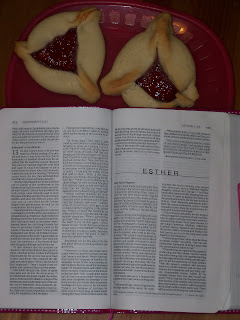 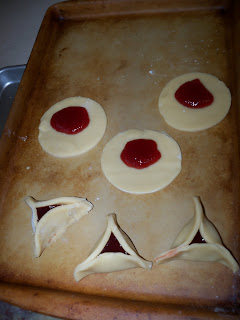 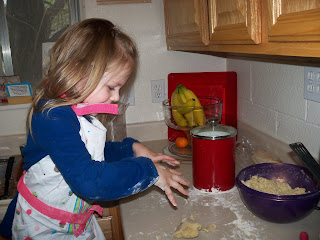 I finished Beth Moore's study, Esther: It's Tough Being a Woman, this week. I love Beth Moore, adored the study and am happy to report that, out of four Beth Moore studies that I have done, it is the first Beth Moore study in which I have completed every lesson. I highly recommend it! At the end of the guide she supplies a recipe for "Hamantashen". These are traditional Purim (the Jewish celebration of their salvation from disaster at the hands of Haman) cookies and the name means "Haman's Ears".

Beth suggests that you makes these to share on the final day of study. Being the accomplished cook that I am, I decided to give it a try. They are basically a filled sugar cookie and since Josie also loves to bake I thought they would make a great "unschooling" lesson. She helped me roll, fill and fold the cookies (they are supposed to be a triangle shape) and then we read the story of Esther while they were baking. It was a fun tie-in, especially for a four year-old. Josie immediately caught the connection that Haman was an ugly man and that was why the cookies were so ugly! In actuality, the cookies are kind of gnarled and warty looking so I can see how, in Jewish tradition, they represent Haman's ugly ears. Ugly physically, and also ugly spiritually because he refused to listen to God.

My cookies were definitely ugly, I am not sure exactly what happened. I don't think the altitude agreed with them. I only took photos of the "nicest" ones, but that isn't saying much! However, we had a great time making them, they were actually pretty tasty, and I hope that Josie remembers the story of Esther and Haman's "ugly ears" for a long time.
Contemplated by Clare at 4:07 PM