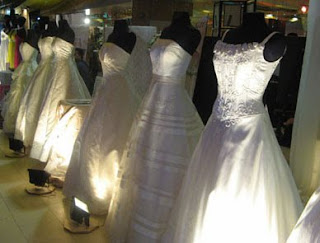 I love the show "Say Yes to the Dress". That is a little odd because, my own wedding dress selection experience was far less theatrical than the stories portrayed on the show. I tried on a total of three dresses, knew right away that the second dress was "the one" (just like they say-I "just knew" the second I stepped out of the fitting room) and spent a grand total of $300. The dress didn't need any changes so I didn't even visit the alterations section, although the store I bought my dress at had nothing similiar to Kleinfeld's.

However, I guess I am just still so entertained by the drama that seems to accompany most wedding dress purchases. First, I cannot believe what some of the women on the show seems to think is the "perfect" dress. There is a designer that is often featured on the show that makes these lace and corset monstrosities that everyone thinks are so unique. Not only are they totally inappropriate for a wedding (basically the whole torso area is see-through) but the store sells them all the time! That means there are a whole lot of "totally unique" brides that are all the same!

That doesn't even cover the tip of the lace and chiffon iceberg! The family members and friends these brides bring along are crazy! I would bring someone who would truly want to help me, not tell me that a dress looks like a shower curtain or a tablecloth on me. Also, one of Murphy's Laws must state that if you try on a dress that is beyond your budget that it will be the one you fall in love with. Then your mother will say, "I didn't pay that much for my whole wedding!". They just don't know how to be supportive, while at the same time being constructive.I took my sister dress shopping with me and I could not have had a better "consultant"; she knew the dress was about me but she also wasn't going to let me make a fool of myself.

I will say, in total honesty, that I did not begin this post for anything other than the fact that I was home alone (well, the kids were here but it is hard to wax philosophical with them) and couldn't discuss this with anyone else. But as I keep writing I cannot help but draw parallels with our spiritual walk. We all have those kinds of "friends" in our lives. The ones who are jealous that we are the ones whose "big day" is coming up, that we are skinnier (clearly I am speaking in generalities, not on a personal level!),prettier, smarter, or that we are the ones who are the focus of attention. You know, the ones that always have to top you in conversation. They can never let you have moment that is truly your own. Or when you are struggling, instead of being constructive and helpful they just reconfirm your own negative feelings. They don't suggest a different dress, or point out what is right about the one they don't like, they just heap on the insults. Or, they tell you what they are doing right, I guess maybe so you can follow their lead. But do we all want the same wedding dress?

I guess what I am saying is this: real friends know how to guide someone towards the truth, both in the realm of white ceremonial attire and also in the Christian walk. They don't stomp on you when you are down but neither do they let you parade around in the Emperor's new clothes. They speak the truth IN LOVE, putting your interests ahead of their own. Do you do that? Do I do that? Or are we always trying to make ourselves look/feel/sound/appear better than we really are? This isn't a popularity contest, nor is it about perfection. My wedding dress probably looked better on me than it would on you and vice versa. We should each be thankful for our gifts while using them to better others. I just hope that should my chance ever come to consult on a wedding dress that I will not mention anything about table linens...
Contemplated by Clare at 4:37 PM