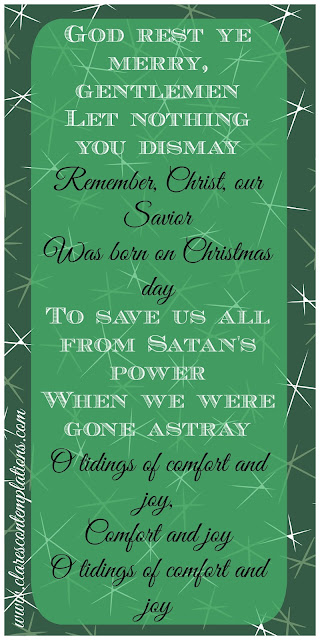 The carols I like the best are the melancholy ones. When I was young, "God Rest Ye Merry Gentlemen" was always my favorite. I remember "discovering" the "Carol of the Bells" and "O Come, O Come, Emmanuel". As an adult, I adore "In the Bleak Midwinter"-anything, deep, low and a little bit haunting.

And it has become more apparent to me, this Christmas, as to why that is. I read, "The Best Christmas Pageant Ever" with my kids this year. I vaguely remembered liking it the one time I read it as a kid, and I wanted to revisit it. Now, all grown-up, it hit me what that book is really all about: the "IM" perfection of Christ's birth. Recognizing that it was *real* and therefore, it wasn't the flawless fairytale we picture it as.

What?! It is paramount to blasphemy to say that, right? But listen: I am not at all implying that our Savior's birth wasn't exactly as the Lord intended it to be. It followed the ancient prophecies, it happened right when it needed to, just as it should it. But it wasn't the softly glowing lights and hay-scented stable we all want to imagine it was.

Mary didn't deliver without pain-as a matter of fact, if she had it would have directly contradicted the curse that the Lord had established at the beginning of the world. Nothing in the New Testament implies that things were easy for Joseph or Mary, they left behind security, friends and even family in their journeys with Jesus, and they never returned to their hometown. Jesus birth is starkly contradicted by death-of all the babies two and under thanks to jealous Herod. I don't care what kind of shepherds the angels appeared to-if they kept earthly sheep, it wasn't in an odor-free clean room.

Christmas was messy. Christ's birth occurred into *our* world. A pain-filled, war-torn, frightening, disaster. We abused, misused and destroyed the purity of creation and ourselves in the process. And it wasn't pretty. It was quite the opposite. And we deserved every bit of it.

But that didn't change the truth that Jesus birth was strange. Don't overlook that. There is very little about it that was intended to be "normal". Even back then, thousands of years ago, babies were born in their *homes* and they weren't laid in mangers, whether they were in stables or not. Mary was humble, and faithful, but I'm sure she didn't specifically ask the Lord to be allowed to deliver miles away from family, after being denied a simple hotel room.
"...she gave birth to her firstborn, a son. She wrapped him in cloths and placed him in a manger, because there was no guest room available for them." Luke 2:7 (NIV)
But that kind of was the point, wasn't it? The whole story reminds us that God's ways are not our ways. He wasn't writing the latest issue of "Better Homes and Gardens". He was authoring a way for us to join Him in eternity. He wasn't interested in impressing us with material goods and showy claims to power. He didn't need to prove to us to He is God, because before any of us were He was (and still is),"I AM". He didn't need to do it our way, He wanted to allow us an opportunity to do it His way.

Christmas didn't need to be "perfect" by the world's standards, because Jesus is perfect by every standard. No earthly circumstance, situation or setting could ever measure up to that. No person involved in His birth could ever compare. So, it is folly to imagine that "Holy Night" as all filmy haloes and warm barns. It was meant to be a stark contrast between the absolute, unattainable, undeniable supremacy of Christ and us. Lowly, powerless, frail. We could never go to Him on our own, so He came to us.
"Remember, Christ, our Savior
Was born on Christmas day
To save us all from Satan's power
When we were gone astray..."
-"God Rest Ye, Merry Gentlemen"

While we were still sinners...
"The light shines in the darkness, and the darkness has not overcome it....The Word became flesh and made his dwelling among us. We have seen his glory, the glory of the one and only Son, who came from the Father, full of grace and truth." John 1:5 &14 (NIV)
So, I don't have to make that first night something it isn't. I don't have to fight and manipulate and struggle to make this Season something it never was to begin with. This celebration of Christ's birth?  It isn't about what I can do, or who I can impress, or how I can make it be anything. It isn't about *me* at all, other than like every other human, I am in desperate need of salvation that I can in no way provide for myself. Jesus is perfect. Christmas isn't-by the measures of this earth. It never has been, and it never will be. And it doesn't need to be-the contrast between our lack and His abundance is just fine. He came in a strange, unusual, mysterious way. He came into darkness because He *is* the light. He came to our twisted, winding road, because He is the straight "Way". So, maybe that is why I like my carols with a touch of melancholy and a little bleaker than most-because from the get go, I like the reminder that the first Christmas has always been a little dark and twisty. And that's just the way it was meant to be.