Red, Aqua, and Cute All Over (Vintage Picnic Wedding Reception) 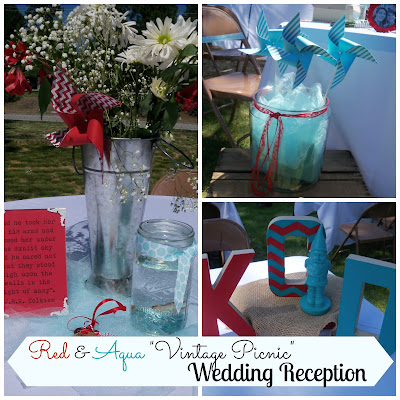 I have to say: decorating for a wedding reception trumps any other type of party I have done, for sheer amount of craziness! It was great though-it definitely stretched my talents and the limits of my creativity. The wedding theme, like all party themes, presented both challenges and inspiration. In the end, I was truly thrilled with how it all came together-I just wish I had gotten more photos! 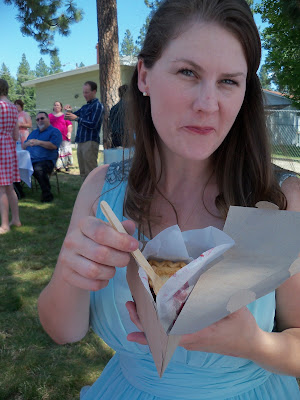 Some of my favorite details weren't even truly decorative. The bride wanted pie instead of the traditional wedding cake (although we served both) and toyed with the idea of individual pies. However, all the food items (for the most part) were "Northwest" favorites, and I suggested that we serve Cyrus O' Leary's (a pie company native to Spokane, WA, where the wedding took place) and my sister Robyn found these great kraft pie boxes-and they came with wooden forks! It made it easy to serve pie to so many guests, and I indulged in a piece of Marionberry and was very happy. 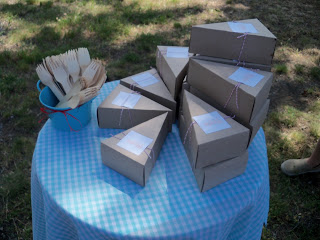 Each piece was labeled with the flavor (we served Marionberry-a blackberry specifically grown in Oregon, Cherry and Apple). They were tied with baker's twine, and they formed a circle tower before they were attacked! 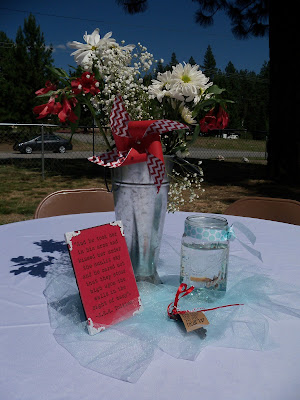 The table settings were a combination of some of the bride and groom's favorite things. The bride had a wonderful friend who put together all the flowers, but I was responsible for everything else. We hunted high and low for metal vases to put the flowers in-we found most of them at Walmart. I handmade all the pinwheels. (When it was all said and done I made over 40-glueing sheets of scrapbook paper together to make them double-sided!) 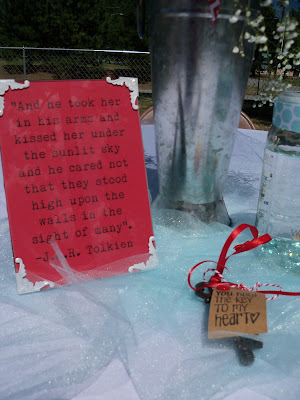 Each table had a different quote about love-selections came from the Bible, Shakespeare, Tolkien, Jane Austen, and even Star Wars. I bought the frames at the Dollar Store and spray painted the corners white. We printed the quotes on red card stock. Another little touch was the "vintage" keys-the groom has a fondness for old keys. We purchased them at Michael's, stamped kraft tags with "You hold the key to my heart" (tags and stamps from Hobby Lobby) and tied them with red ribbon and baker's twine. The bride plans to use the one she saved as a Christmas ornament. I was just thrilled that we found a stamp with such a perfect saying! 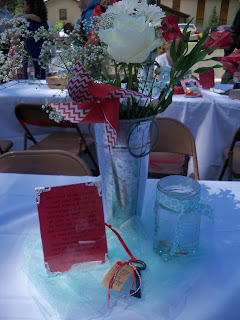 Everything was grouped on blue tulle to help give it some definition from the white tablecloths. We had the reception in the church yard, and it was a great place for a wedding that felt like an old-fashioned box social picnic! 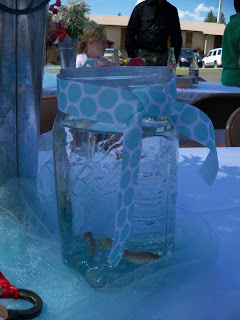 The finishing touch of the table decor was goldfish. That is the bride's pet name for the groom, and I couldn't pass up the opportunity to use them. Just in case you were wondering-no goldfish were harmed! Several people were concerned that they might not make it in the heat, but we didn't lose any. We waited until the last possible moment to put them in the jars, and then they found homes with the guests after the reception. We used Mason jars in several places as decoration, and the fish were a perfect fit in two quart jars tied with ribbon (from Hobby Lobby). 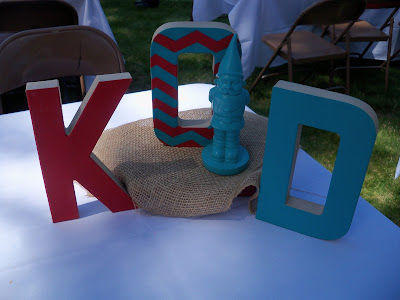 The gnome had a special place in my heart. He was the inspiration for the color blue that the bride wanted and I felt like he deserved a place of honor. He found a spot at the head table with the hand painted initials of the bride and groom. Grouped together, they formed the main decoration for the bridal party.


Another touch that was truly inspired-instead of place cards for the attendants, I used photos-each of the bridesmaids with the bride, and each of the groomsmen with the groom. It added color, and made for a nice keepsake for each attendant. I also used white sheets hung on rope (tied around two trees) to make a "backdrop" for the head table. It really helped to define the space and looked so much better in the photos! 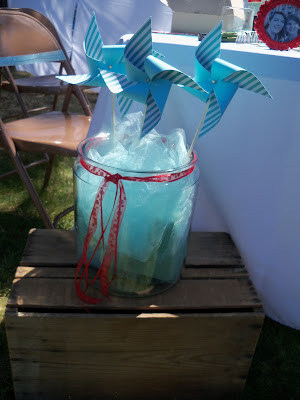 I added these wooden crates to each end of the head table and used floral foam covered by tulle to prop more pinwheels in. It helped to ground the table and give it a little extra "something".

I also adored the photo booth (it was my favorite area after the candy bar/buffet). I pick up the fun mustache and hat props, made a little tulle bow and stuck it all in some foam on a basket. The surprise hit was these laser cut frames. They were from Michael's and were a *steal* at $1.99 each! My sister spray painted them aqua, red and white, and I think you can see in the above photo that they were well worth it.

We used a white sheet as a backdrop for the photo booth and added a bunting garland that matched the one used in the sanctuary for the ceremony. I could NOT resist adding this photo of my adorable little brother. Isn't he hilarious?! The photographer (John Rich, a sweet friend of my family, and his wife-who also did the flowers AND took photos, as well as a million other things) did an absolutely fantastic job. He edited this photo to its best potential. And I love it!

I can't believe how many talented people used their gifts and talents to bless my sister and her husband. It was such a sweet outpouring of love, and I know that there were a lot who didn't get near the credit they deserved. I was honored to serve her in this small way, and I hope that the day was full of memories that they will both be able to treasure. I know it was for me!


Linked up to:
"Thrifty Thursdays" on Living Well, Spending Less