If Christmas Makes You Cry 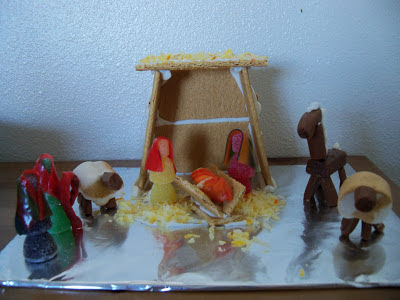 "There were sheepherders camping in the neighborhood. They had set night watches over their sheep. Suddenly, God’s angel stood among them and God’s glory blazed around them. They were terrified. The angel said, “Don’t be afraid. I’m here to announce a great and joyful event that is meant for everybody, worldwide: A Savior has just been born in David’s town, a Savior who is Messiah and Master. This is what you’re to look for: a baby wrapped in a blanket and lying in a manger.”

At once the angel was joined by a huge angelic choir singing God’s praises:

"Glory to God in the heavenly heights,
Peace to all men and women on earth who please Him."


As the angel choir withdrew into heaven, the sheepherders talked it over. “Let’s get over to Bethlehem as fast as we can and see for ourselves what God has revealed to us.” They left, running, and found Mary and Joseph, and the baby lying in the manger. Seeing was believing. They told everyone they met what the angels had said about this child. All who heard the sheepherders were impressed.

Mary kept all these things to herself, holding them dear, deep within herself. The sheepherders returned and let loose, glorifying and praising God for everything they had heard and seen. It turned out exactly the way they’d been told!"
Luke 2:8-20 (The Message)

Read that. Read it again. And again. Read it until you really comprehend what it says: Jesus came to earth for us. It gets me every time. Right now, typing, tears are streaming down my face. My kids have kind of gotten used to the fact that I can't ever read the Christmas story without crying. Or hear " I Celebrate the Day" without sobbing.

And I really don't care because I've decided that its okay if Christmas makes me cry. I know emotions hit people differently: Mary held those things dear while the shepherds belted them out. And I think that if the fact that my Savior came without any fanfare other than a couple of smelly ranchers makes my eyes well up, then maybe that's a good thing.

JESUS CAME. The Lord gave the people precious little advance notice-almost no one was prepared. Mary knew He was coming, but still all she had with her were a couple of blankets-no ideal nursery. Joseph knew, but he couldn't even find a real room!

I think that God didn't want us to be ready-because there is no way we ever could have been. You can't make things perfect for the One who is Perfect. And so God showed us grace even in this: Jesus came when we weren't ready, and through His coming when we weren't  prepared, He prepared us Himself to receive Him. And that fact that He did everything-from start to finish-just makes me so overwrought with emotion...

Let Christmas make you cry. It's a good thing to recognize that no matter what would have been waiting for Him, it would have never been good enough. We could have had the most gorgeous palace, the finest linens, the most prestigious guests, and we still would have fallen so short of the Glory that it would have been ludicrous. So, instead of demanding we kill ourselves trying to achieve the unachievable, God surprised us instead. He sent His one and only Son, the Heart of His heart, to save us instead of condemning us to death.

So the real shock isn't that the Holiest One was brought into a lowly, filthy manager, but that He can come into our disgusting, selfish, sin-sick hearts and turn them into exactly what that stable became: a place of great rejoicing, filled with His presence, and making nothing else matter. And the fact that He did that for me, well, I really hope that never stops making me cry.

Contemplated by Clare at 2:45 PM