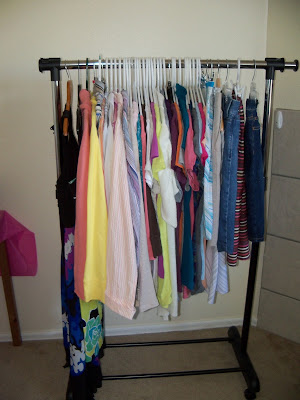 I love clothes. Shopping is a competitive sport for me, one that gets my blood pumping and my eyes gleaming. I am an excellent clearance shopper-not just cheap clothes, but fashionable, no-one-would-guess-I-only-paid-a-dollar-for-it kind of stuff. I don't necessarily consider myself a "trend setter" but I do love to put together different outfits. However, all this shopping causes one problem: extra stuff.

I have been on a mission to declutter and simplify my house. I am not ever planning on having six shirts and two pairs of pants or anything drastic like that, but I did decide I wanted to get rid of everything that was too big for me and most of what was too small (the dreamer in me couldn't get rid of a few choice items!), and anything I just didn't care for. So I purged:once, twice, three times! And I had a ton of things that I couldn't wear.

I have tried selling my clothes. On Craigslist, at yardsales, to consignment stores. I had a girl on Craigslist who bought my jeans and then decided she wanted to return them. I have marked tons of stuff for yardsales only to return home with 3/4 of it. And I have taken it to consignment stores to be offered $10 for three pairs of jeans (two Gap, one Lucky), never worn New Balance shoes (given to me by a friend) and 6 tops! Ummm, no thank you!

So, what's a girl to do? I could have donated my things to Goodwill. I am a big fan, and I think they have a quality program. But I am friends with lots of non-shoppers. Who often comment on my taste in clothes. So finally, one day while trolling the internet I decided I wanted to have a clothing swap! It would be a great way to give things to people who would appreciate my quality clothes, grab a few new things for myself and have a party! I love a party, too.:)

First, I sent out an Evite. I set the time and date. I also included that each guest should plan on bringing at least 10 things to swap. They were welcome to bring more, but I felt like that would be a good starting point. Believe it or not, I had a few friends who had trouble coming up with that many things! It could include: pants, tops, dresses, shorts, sweaters, jewelry, scarves, accessories, purses, shoes-basically anything you could wear.

A few people were worried that we weren't all the same size, but since most of had clothes that were too big, too small, and also just weren't "right", we had a variety of sizes from 4-12. Definitely something for everyone! 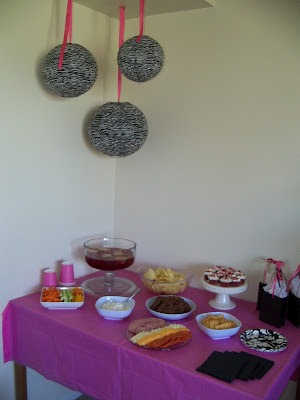 And because I can't resist an opportunity that says "party", I had to do a couple of my own little things! I chose to repeat the colors from my birthday party, so I could reuse the paper lanterns and tablecloth. The party was in the afternoon, so I went with simple food: crackers, cheese, salami and pepperoni, chips and dip, veggies and these delightful cookies! My friend supplied the red velvet cupcakes. 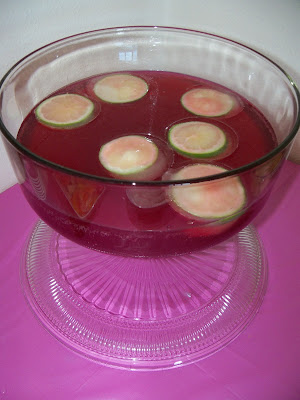 I also made a really tasty punch. I used 3/4 of a bottle of cranberry-cherry juice, added 1/4 cup lime juice and one-third of a two liter of ginger ale. I made the ice cubes in a muffin tin and floated lime slices on top-thanks, Pinterest! Punch just says "party", doesn't it? 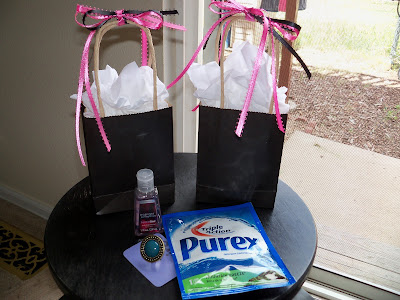 I put together little prizes,too. I decided I would have a prize for: most items, item that had the most ribbons (that meant the most people wanted it) and for best outfit put together from swap pieces. It didn't quite work out that way, but it would have been fun! 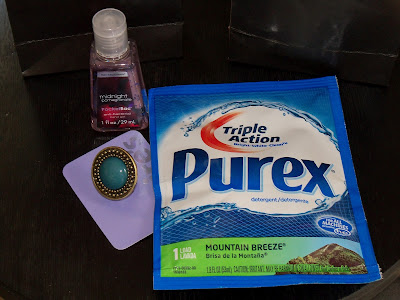 The prizes were a big hit. I put in a cute accessory from Claire's (thank you, 10 items for $10 clearance-perfect!), either a ring or a necklace. This one was a ring that I loved so much I bought a duplicate for myself! I also included either a lotion or hand sanitizer from Bath and Body works and for fun-since it was about clothes (which are laundry) I put a different sample of laundry detergent in each one. I send away for free samples all the time, so I had plenty handy. However, it would be really easy to put a Tide Pod, or something like that in each one. 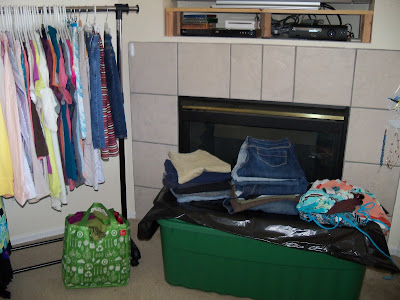 And then it was time to swap! I forgot to take pictures once every one's clothes were out-this is just my stuff, except the green Target bag. Crazy, huh? I used my rolling rack to hang all the shirts, dresses and skirts and then folded the pants, swimwear and layering pieces on the green tub. 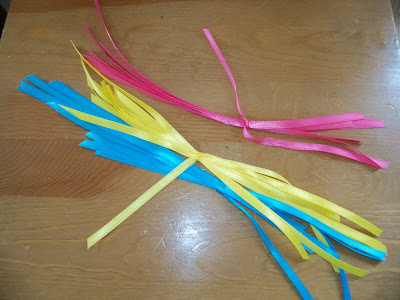 I bought ten different colors of $0.50 ribbon from Micheal's and cut off ten 10 inch pieces from each roll. We used these to mark which things we wanted. If two (or more) people wanted the same item, we removed the ribbon and "drew" for it. Basically someone held a piece in each hand and someone else picked a hand. It actually worked out to be pretty fair! 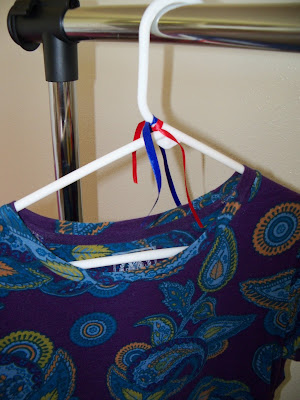 Everyone took their time looking through the items, trying things on, and finding things for other people. They tied the ribbon either on the hanger, on on the belt loop, or wherever. Once everyone had used their ten ribbons, anything else was free game to take. Anything with multiple ribbons we held a drawing for, and I tied up all the leftovers for Goodwill. We had a great time eating, chatting and swapping, and several people said they hoped it would be a semi-annual event! Maybe, but for right now, my closet is pretty clean!﻿
Contemplated by Clare at 9:40 AM