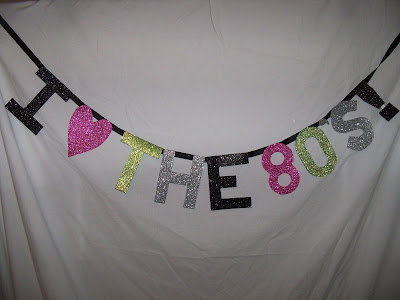 This year was the big 3-0 for me. Surprisingly, I was excited about turning 30. It seems to be the threshold of "real" adulthood, but not only that, I am quickly realizing that life moves fast, better not to mourn things that do not merit sadness. Turning 30 is one of those things. I am not, nor am I anywhere close. Ask me again when I am 80. But I did feel that this merited a party. Perhaps it is rude to throw oneself a party (I wouldn't know, but feel free to ask Mrs. Post on my behalf.) but I really can't say that I did it solo, I had lots of help from my Honey and some very good friends.

Joel came up with the 80's theme (I won't force you to do the math, I was born in 1982.) and at first I kind of balked. What exactly constituted the 80's? Then it hit me: tacky is truly the best descriptive phrase for that decade. And tacky, well, I can do tacky!

I always have to have a banner and this one practically put itself together. Two packages of glitter foam and roll of black grosgrain ribbon from the dollar store. A little hot glue. Wah-lah! 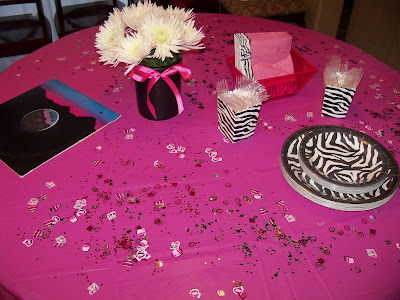 I always have to have a banner. This one practically put itself together. Two packages of glitter foam and some grosgrain from the dollar store. Wah-lah!
My best decorating cohort in crime, Sarah, designed the invites for my party. I am realizing just now that I forgot to take a photo of the invitation. Perhaps later. Anyway, they were great neon colors with zebra print, and they were the springboard for the color scheme: pink and green with zebra print. Awful, yes? The pink plastic containers are from the dollar store, and the confetti is from Party City ($3). The plates, tablecloth, napkins and favor boxes are from Hobby Lobby. Joel bought the vintage record for my cake plate. (Goodwill, $0.50) (See, Mom, I am using my crock from Goodwill that you bought me!) 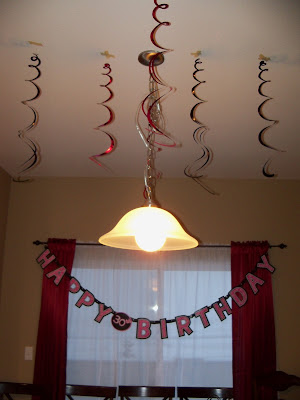 It actually turned out really cute. And much nicer than those silly "over the hill" parties people do for 30. The only thing that said "30" was my store-bought banner from Hobby Lobby (that is also where I got the spirals from as well). I don't usually do the diva style-you know, hot pink and animal prints, but it went so well for this! 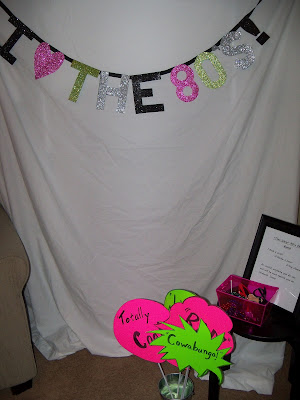 One of my favorite things of the whole party was the "photo booth". So simple, but it was fantastic having a picture of everyone at the end of the night! I asked each couple to pose when they came in. I didn't miss anyone and it will make a great page when I do a photobook.

The setup could not have been simpler. I took my rolling wardrobe rack, raised it to it highest position and extended the arms. I covered it with a full size white sheet and draped the banner over it. 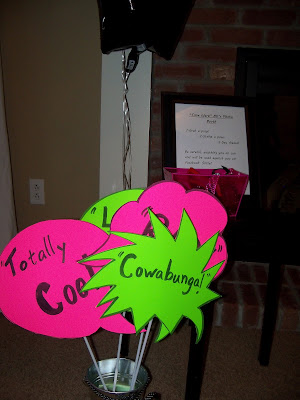 I made little "speech bubble" signs with neon poster board and balloon sticks. I usually throw at least 3-4 parties in a given year and balloon sticks (purchased at Hobby Lobby) have saved me countless dollars on helium filled balloons. Just pop a cheap-o balloon that you blew up yourself into the plastic collar and you have stand up balloons just the right height for table decor. 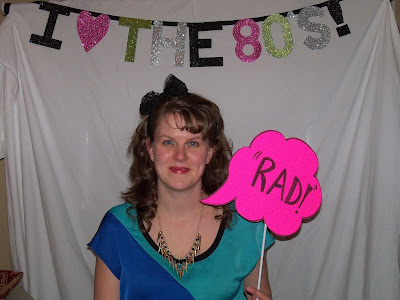 They worked perfectly taped to the back of my bubbles as handles. By the way, they said, "Rad!", "Totally Cool!" "Like Awesome, Dude!" and "Cowabunga!" I was not smart enough to open my mouth the way you are supposed to, so it looks like you are talking. Still cute, though. 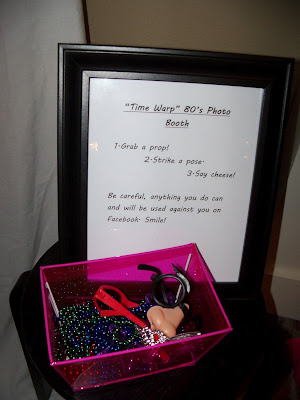 Click on the photo to enlarge the instructions for the photo booth.I printed it on the computer and popped it into an 8x10 frame from my house. The pink basket is filled with props: glasses, sheriff's badge, cheap bead necklaces, etc, for your photo taking enjoyment. 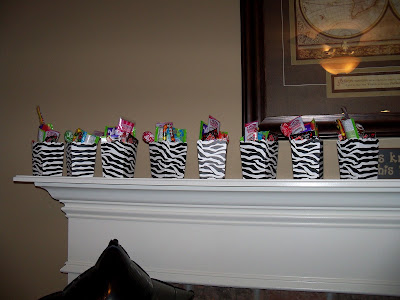 The party favors. I have two party rules, well actually three, now. 1. You must have balloons. 2. You must have a banner. 3. You must have favors, no matter the age or sex of the party-goers. I think my mom did that to me. 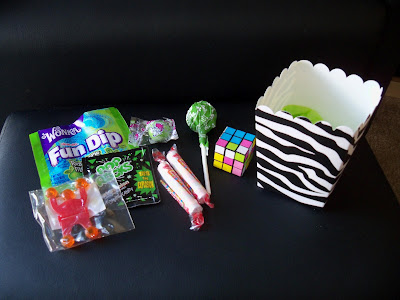 The favors were so fun to put together. They included a variety of candy, and then each had different toys for the boy ones and the girl ones. The guys had the sticky "wall-walker" dudes and a Rubik's cube. You did not live in the 80's if you do not know what a Rubik's cube is. Thank you, Party City, for providing them in perfect colors for $0.59 each! 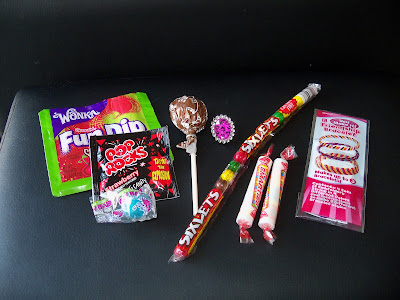 The girls' favors were fun, too. They each got a cheap animal print ring and a really fun "make your own friendship bracelet" kit- also from Party City. That place has the BEST selection of favors. And I love that you can buy them individually-perfect when you have an unusual number of guests! And so inexpensive- the rings were $0.25 and the kits were $0.59. Even the Sixlets and Pop Rocks were priced individually! I bought the Smarties, Toostie Pops and Fun Dips at Target. 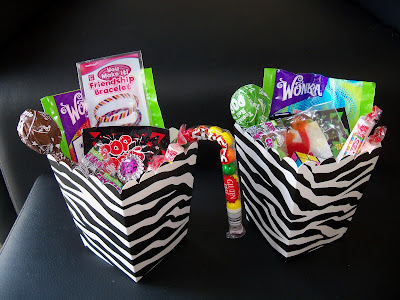 I forgot that I had bought Pixie Stix. :( I always forget something at a party, so I guess that wasn't too bad. All the boys favors were green and the girls were pink. 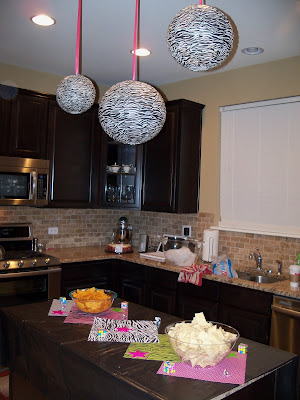 Set up was pretty simple. My dear, gracious friend, Christy offered up her house for the shindig. Ours is way too small to have more than about 6 people. It was great! The zebra lanterns, tablecloth and scrapbook paper used as a runner are all from Hobby Lobby. 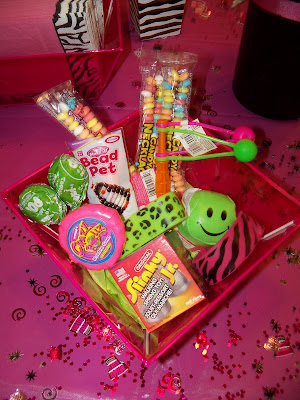 The prizes were fun, too. Bubble Tape, slinky, cheap plastic bangles, candy necklaces, a klacker- all reminded me of my childhood. We played some great games. My friend Sarah's husband put together a fantastic movie clip game that was a smash hit. She did a balloon popping trivia game, and I did a riddle game using songs from the top 100 of the 80's. There were also prizes for best costume, because you can't have an 80's party without dressing up! 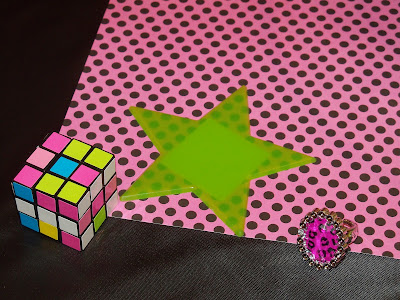 I used the glow in the dark stars, and borrowed the Rubik's cube and rings from the favors to use as table scatter. 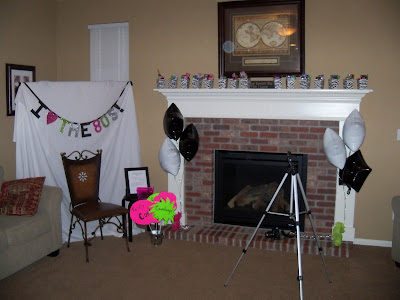 A pulled back shot of the photo booth, along with the tripod. That worked so well for taking photos- I even got a few decent self-timer shots. 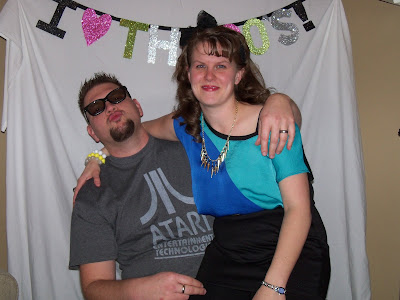 My "too cool for school" hubby and me all decked out in our 80's best. When Sarah and I went shopping for our outfits were were amazed that all those ugly clothes are back in style! My dress is from Charlotte Russe ($15) and also that crazy ugly necklace. The headband is from Party City ($3) and the bracelets I already had. You can't see my shoes, but they were crocheted flats from Kohl's ($4). It came together well once I teased the tarnation out of my hair- it took 3 applications of hairspray to get it that full-it is pretty flat normally! 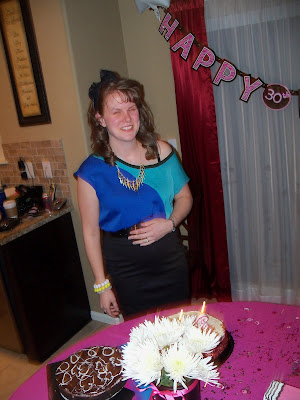 And what is a birthday without an unflattering, about to blow out the candles, photo? It is really awkward to have 12 other adults sing to you while you stand there.  It was worth the wait for the cakes though: red velvet and Tuxedo Cream Mousse Cheesecake by the Cheesecake Factory (both from Costco). 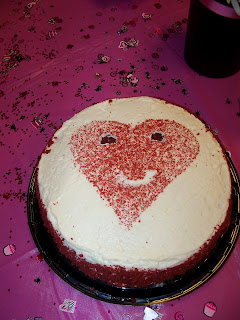 Someone joked that once I pulled the candles out that it looked like eyes. So I added a mouth.

It was a fabulous party. Everyone had a great time (although that could have just been because we were all so giddy without our children!) and we are already planning our next one. It could have also been the food- I am a big fan of catering. We had Rudy's Barbeque and it was wonderful! Good food, great friends and plenty of laughter. It was a marvelous way to start off my third decade!
Contemplated by Clare at 3:35 PM

Labels: 80's party, About Me, Birthday