A Tale of Two Pumpkin Patches 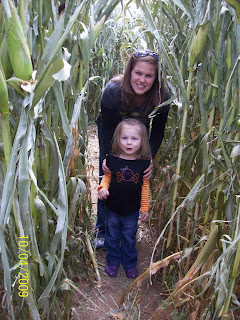 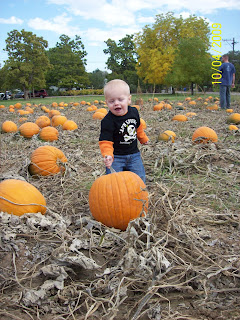 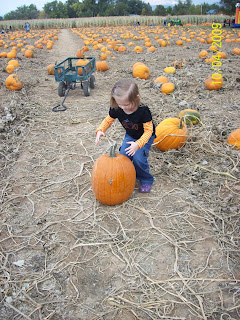 I hope everyone got the chance to see the pumpkin patch photos I posted on my Facebook page about two weeks ago. We had a fantastic time. There was a corn maze, lots of photo opportunities, a private hay ride, a really neat bin full of corn kernels for the kids to play in and hundreds of gorgeous (cheap!) pumpkins. The weather was perfect and everything was just right. I had wanted to go to a really fun patch and I looked and looked for the perfect one. This one wasn't close, but it had everything I knew I wanted. I also decided (based on previous experience) that I wanted to be sure to go early. I wanted the best choice of pumpkins. It was great.

Well, we received an invitation to go to another patch. I knew it wasn't so much my style. It didn't have the things that I wanted. There was no maze, no corn bin, and the tractor ride was just a quick, basic to the patch and back affair-without hay! Worst of all, we had waited too long. We had a horrible ice storm that damaged all the pumpkins and the few this place had were mostly rotten and stunted. But, all my friends were going. So, we had to go too, right?

You can probably guess where this is headed. I am not maligning the second place (actually, I know it can be fun at the right time) but it struck me that all too often I am influenced by what other people think. I know what the Holy Spirit is telling me, and often it is not what everyone else is saying. That second patch almost felt like the emperor's new clothes. Everyone said it was so much better but in reality they had never tried the other one. Or any other one. I am glad that I listened to my own instincts and went (even with only my family) to the first place. I knew what I wanted. I wish I was that gutsy over important things. Often, when my dad knew we were being wrongly influenced or pressured, "When you are standing alone, you are standing with God." That is not 100% true but most of the time it is. Sometimes, going to the good patch by yourself results in much greater blessings- and better pumpkins!:)- than following the crowd. Because listening to the Holy Spirit is always the right thing to do.

By the way, my second patch is mostly part of my analogy. I actually had a great day with friends, and because we got pumpkins earlier was not at all disappointed by the ruined crop! It worked out well for us in the end.:)
Contemplated by Clare at 2:03 PM