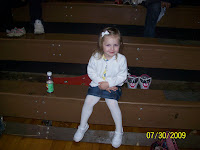 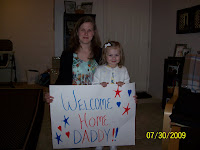 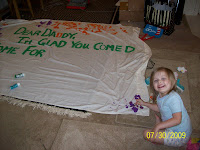 If anyone is wondering why I dropped off the face of the blogosphere (AGAIN!), it is, of course, because Joel is home. He arrived in the wee hours of the morning on Friday and had the next few days off. He was supposed to be home at 10:30 pm on Thursday, then it got moved back to 11:30 pm. Jocelyn and I left the house at 11:10 pm. Carson was asleep in his bed, smart boy. (Don't worry, Jessica was still here and she stayed with him.) We weren't very far away from the Special Events center so it only took a few minutes to get there. We arrived and found literally hundreds of other people waiting. We were excited but mostly tired. We had spent the whole day cleaning and cake-baking and painting a sheet to hang on the post fence by the highway. I knew that there was a possibility that things would be running behind.

Boy, was I right! We waited, watching all the people. Who knew that there are people who come to every welcome home event? Veterans and other people from the community make sure that they are at every ceremony, no matter the time, to enthusiasticly greet each soldier. How impressive! They had a movie screen set up so that we could see all the guys departing the plane. We must have watched that video 5 times and never saw Joel! It is hard to tell who is who when they are all dressed alike. He is pretty tall, but there are a lot of really tall soldiers. (Some super-short ones, too, much to my amusement.) We waited, and waited. Everyone was trying to keep their energy up but we waited over an hour and a half! It was so noisy, they play really loud, upbeat music. That is fine at 2 pm, but a little hard to take at midnight. We kept watching the doors where the soldiers come in. Every time someone would move near the doors, you could hear people saying, "Get ready, they are coming in!" After hearing that about 15 times I finally decided I wasn't moving until I heard the announcer say something. Sure enough, she soon did. That they weren't going to be there until after 12:30 am! Well, some might say that I had already waited all those months, what is a few more minutes? A lifetime, I tell you!

We chatted with the people around us, Jocelyn slept off and on. We took a few pictures.

Then they started the smoke machines (I'm telling you, they make it a really big deal). We started to get a little more excited. Then, after about 10 more minutes (a toe-tapping eternity!) the announcer had everyone stand. And they all marched in! If everyone in the crowd was excited, I can't imagine how excited the soldiers were! They had spent the last two hours filling out paperwork and listening to lectures. The chaplain prayed and the commander said a few words. Then both sides collided, a huge wave of family on one side and soldiers on the other. It reminded me of that Life photo from World War II. People were screaming and crying and hugging. Josie and I just stood in the middle, waiting. I knew Joel would find us. And he did! I would love to say that we laughed and cried, but after a kiss we just hurried to leave behind the craziness. We had to run collect his bags from huge piles of Army green duffel bags and backpacks. I have no idea how he knew which ones were his, besides the dull spray-painted letters everyone has on the bottoms. But finally we were on our way home. It was too late to do anything more than glance at the posters and cake we had made. But, of course, none of that was important. Joel was finally home!

Contemplated by Clare at 7:52 AM