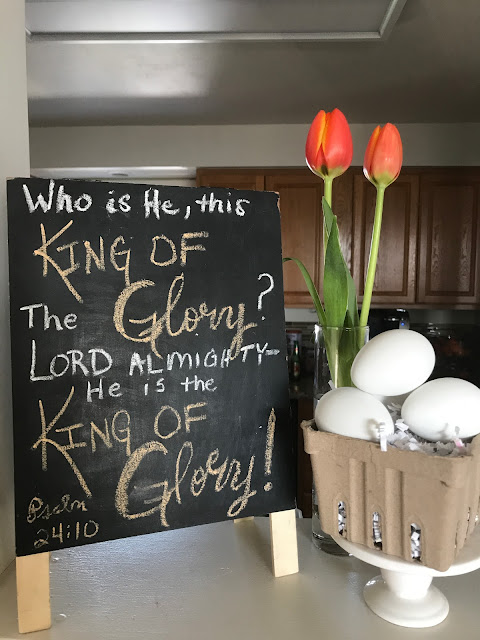 (I must confess that the idea  of "exile" was borrowed from Russell Moore who is using it as part of his series, "Reading in Exile".)


"The roads to Zion mourn, for no one comes to her appointed feasts. All her gateways are desolate, her priests groan, her maidens grieve, and she is in bitter anguish."
Lamentations 1:4

"My sins have been bound into a yoke, by His hands they were woven together. They have come upon my neck and the Lord has sapped my strength. He has handed me over to those I cannot withstand. " Lamentations 1:14


When one thinks of Easter the book of Lamentations isn't usually the first one to come to mind. Any of the Gospels, if you want to go further afield perhaps another book of the New Testament. Really far out? Maybe throw in some Isaiah or Psalms. But I keep turning current events over and over in my mind. I am frustrated, I am confused, I am angry. Everything familiar seem ripped away by circumstances beyond my control. I feel thrown into a foreign land, one I don't have skills to navigate, one where convention and tradition have been tossed to the side like so much extra baggage on the Oregon Trail, abandoned with no hope of returning to it.

It might seem melodramatic to some, but go with me- to have freedoms taken, however small, and replaced with fear and lack of certainty always moves one to grief. To be haunted by death and illness should be saddening. We mourn the past, not the least because we knew what it held. And there are definitely those who know that feeling.

"Joy is gone from our hearts. Our dancing has turned to mourning." Lamentations 5:15

This is not normal, and we should not treat it as such. We should be sorrowful for the way that sin has wreaked havoc through disease and fear over the entire world.

"The hearts of the people cry out to the Lord. O wall of the Daughter of Zion, let your tears flow like a river day and night; give yourself no relief, your eyes no rest." Lamentations 2:18


The exile of the people of Israel is one of the most gut-wrenching events in the Old Testament. The promised land was no longer theirs-not only had they been overrun by the enemy they were wrenched from their towns and homes and thrown into a foreign land. They wanted to blame the Assyrians, the Babylonians,  the Egyptians, anyone but themselves. They found themselves alone, far from everything they knew.

And they weren't coming back. Normal would never be normal again.

And it was all their fault.

"Let us examine our ways and test them, and let us return to the Lord. Let us lift up our hearts and our hands to God in heaven and say: We have sinned and rebelled..." Lamentations 3:40-41a


For decades, through Daniel and Esther, through Jeremiah and Lamentations, the people of Israel were foreigners in a foreign land. Birthdays, anniversaries, births, weddings, and even deaths happening all the while. And the feasts, the ones we slog through in Leviticus but that defined the seasons of their lives, kept occurring: the Feast of Tabernacles, the Feast of Weeks. Passover.

I can't begin to fathom the pain and irony of even considering observing a feast that was a celebration of release from exile. While in exile. Passover, the time they were redeemed from their oppressors. Celebrating, remembering, while in the grip of new captors.  Painting doorways with blood to signal release. Baking bread meant for a journey of freedom. While locked in a cell of their own design.

"He [Jesus] replied, 'Go into the city to a certain man and tell him, 'The Teacher says: My appointed time is near. I am going to celebrate the Passover with my disciples at your house." Matthew 26:18

This is My body given for you...

This cup is the covenant in My blood  which is poured out for you...

Passover means Easter to us.

This year it may feel like we are in exile, separated, forced to let go of long-cherished familiar traditions. We may feel robbed and frustrated. But more so than ever before, let us celebrate Easter as one in exile.

One waiting for the coming King.

One covered by the Blood.

One knowing that this is NOT our home.

One knowing that all His promises are true,

One knowing that this will end and then we will really be Home.

One clinging to faith when the world is unfriendly and uncertain.

One who continues to look with hope, true hope, when it all seems hopeless.

"Because of the LORD's great love we are not consumed, for His compassions never fail, they are new every morning; great is Your faithfulness. I say to myself, "The Lord is my portion; therefore I will wait for Him. The LORD is good to those whose hope is in Him, to the one who seeks Him." Lamentations 3:23-25


We underestimate the faith of those who turned and repented in exile. They looked for Jesus. They looked for over 400 years. We live in the realization that Christ has come, but we, too, should be looking for Him to come again. There were those who continued to celebrate the release they had experienced, as we experience new life in Christ here on earth, but as they looked with expectancy to a better, fuller freedom, so do we. This world is not our home, but trusting fully that in Christ every promise of God is, "Yes!" Exile is always meant to teach us something. Don't let this be any different.

"All these people were still living by faith when they died. They did not receive the things promised; they only saw them and welcomed them from a distance. And they admitted that they were aliens and strangers on earth. People who say such things show that they are looking for a country of their own. If they had been thinking of the country they had left, they would have had opportunity to return. Instead they were longing for a better country-a heavenly one. Therefore God is not ashamed to be called their God, for He has prepared a city for them....These were all commended for their faith yet none of them received what had been promised. God had planned something better for us so that only together with us would they be made perfect." Hebrews 11:13-16 & 39-40


Better things are yet to come but we can still celebrate, for even in exile, HE IS RISEN.

Contemplated by Clare at 2:35 PM