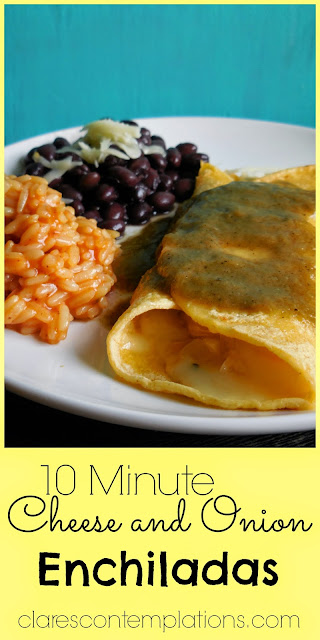 Mexican. It is my most favorite type of cuisine. I would probably eat it every day, if I could. I love spicy, flavorful food, and it fills the bill every time. I also love it because so many things are so simple to prepare.

These enchiladas are *so* easy! I love to order cheese enchiladas at Mexican restaurants, but I could never get them quite right at home. So recently, I took to ordering them every single time we went to our favorite Mexican place and I discovered something: unlike most recipes I had found, theirs were never soggy, and they weren't swimming in sauce. And it hit me: I didn't have to bake my enchiladas! I would get better results, and faster ones, by skipping the baking! So that led me to put these together. You melt the cheese in the tortilla in a skillet, and top it with the sauce right before serving-resulting in cheesy, but not soggy, enchiladas with the perfect amount of sauce!

10 Minute Cheese and Onion Enchiladas
1/2 white onion chopped
butter for sauteing
8 corn tortillas (I used "super sized ones, that were about 6 1/2 inches across)
8 oz. Monterey jack or jalapeno jack cheese (depending on how spicy you want them), shredded
4 oz. cheddar cheese, shredded
16 oz. of your favorite green enchilada sauce

1. Saute the chopped onion briefly in a separate pan. The onions can be caramelized, if you like, but I only cooked mine for a few minutes because I wanted them to still maintain some texture. Set to the side.
2. While the onions are cooking, heat your sauce. Keep it on "low" while you cook the enchiladas.
3. Preheat the skillet on low, and add a *generous* 1/4 c. (or a scant 1/2 c., which ever way you would like to look at it!) of cheeses, using about 3/4 monterey jack to 1/4 amount of cheddar to the center of a tortilla. Place in the skillet. Add about 1 tablespoon of the onion in a line down the center.
4. I added 1/4-1/2 tsp. of water to the side of the skillet and topped it with the lid. Keep a close eye on it, all you want is for the cheese to melt. 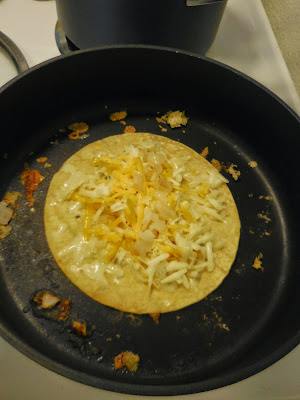 5. As soon as the cheese is melted, remove the tortilla, roll it quickly on  the plate and top it with sauce.
6. Serve with your favorite toppings-I can never resist sour cream! 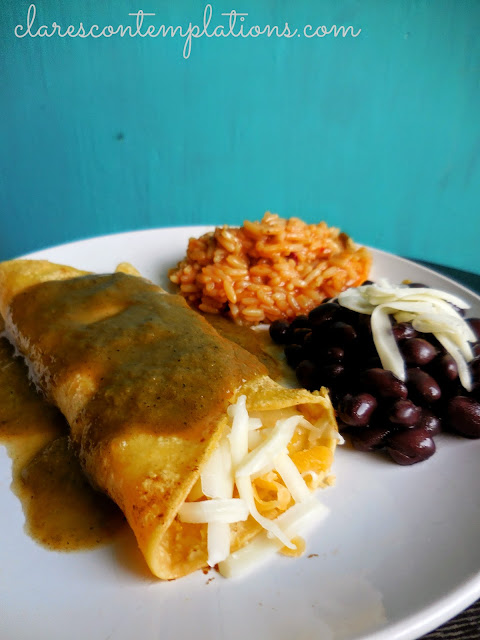 I only made one at a time, and it still only took me about ten minutes to make enough for our entire family (and Joel had three!). This is such a great vegetarian meal, truly no one even misses the meat. I added black beans and Spanish rice on the side-and some guacamole, which we ate before it made it in the photos.

I was a little worried that because these were so easy they wouldn't be tasty-um wrong! Joel raved about them, and I will definitely be making them again-especially during the summer when I don't want to heat up the oven.