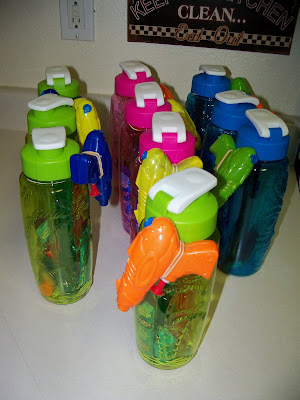 My children attend a marvelous Awana program. If you are not familiar with Awana, it is worldwide Scripture memory organization. Kids memorize Scripture, learn about missionaries and play games. They earn awards based on their performance. It requires a ton of workers, and this year my kids both had wonderful groups of  leaders.

I think it is so important to thank your children's church teachers. Everyone remembers their children's school teachers-and that is great, too. But I am so appreciative of the people that work hard to teach my kids about the Bible and how to love and obey the the Lord.

Our budget is really tight right now, and I was hard pressed to come up with an original idea. Candy or baked goods are so frequent, and personally, I am not overly appreciative of all those extra calories! I would have loved to have given each person a gift card, but even then, not everyone likes Starbucks as much as I do, and that was definitely not in the budget.

My sister suggested giving out bottles of water with packaged drink mixes. I would have needed to re-label the bottles, and I learned from Carson's party last year that labeling water bottles is a pain! However, I took the kernel of her idea and expanded on it.

Part of my difficulty was that I needed at least 12 gifts, for both adults and teenagers, and men and women! I wanted something memorable, that wasn't expensive and would be fun. 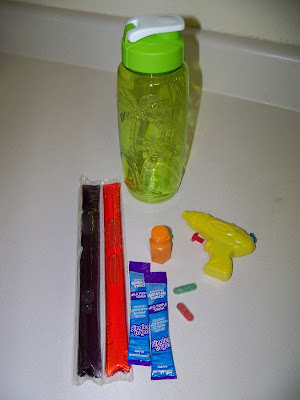 This is what I came up with: the Dollar Store had fun reusable island themed water bottles. I filled each bottle with two ice pops (unfrozen, of course!) two packages of Hawaiian punch drink mix, two expandable sponges and some bubbles. Then I attached a water gun on the outside.

It might seem like that was a bunch of silly things, but I knew almost all of the adults had kids, and that the kids would enjoy  the toys. I knew the adults could use the bottles. I thought all the teenagers (there were four adult leaders and eight teens) would love the water guns! 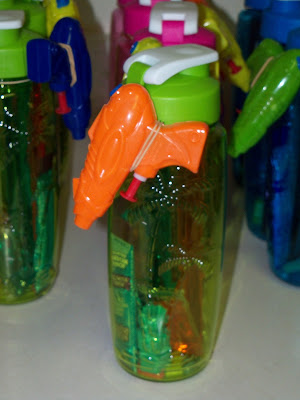 I filled the bottles with all the things, and it was easy to get the ice pops in there, I just bent them at the bottom since they were still liquid. I looped the rubber band through itself around the handle of the water gun, and then placed it over the bottles. It made them look even more fun and colorful.

All ready to go, but there was something missing. I wanted to let the leaders know how much I appreciated their hard work... 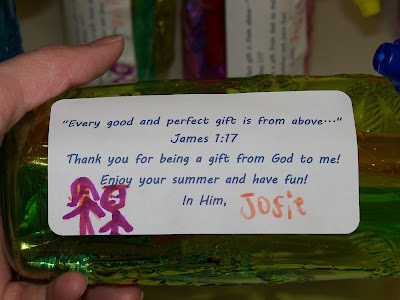 So I grabbed my trusty mailing labels and printed off some thank you stickers! Each one says,

" Every good and perfect gift is from above..." James 1:17
Thank you for being a gift from God to me! Enjoy your summer and have fun!
In Him, 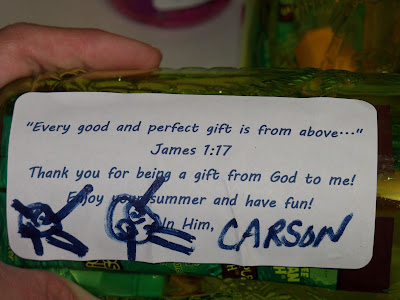 The each child drew a picture of themselves with each leader and signed their name (I helped Carson with his, can you tell?)

I could have done a variety of verses, such as:

"And if anyone gives even a cup of cold water to one of these little ones because he is my disciple, I tell you the truth, he will certainly not lose his reward.” Matthew 10:42  with "You gave far more than a cup of water, so here are some "refreshing" things to say thanks!"

but I have always been partial to James 1:17, so that is what I went with. I know that child of one particular teacher was thrilled with everything- he thought it was fantastic that there were popsicles in it! It would be so easy to put a variety of things in there, and it ended up costing me less than $2 per gift. I have a feeling I know what the VBS teachers will be getting...
Contemplated by Clare at 11:54 AM