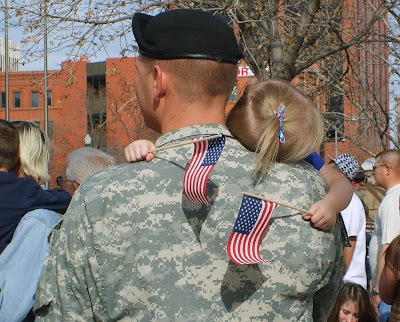 Joel and I were discussing how much life has changed since 9/11. I remember the military before, all pressed shirts and dress pants. Now they all wear combat uniforms. I remember flying to Illinois that August, and on my return flight home Joel walked me to my departure gate. Now, you are not allowed past security without a boarding pass.

But I also remember how it seemed every house had a flag hanging right after that day. I remember just praying and praying for the safety of people I didn't know. I remember the feeling of pride mixed with sadness on sending my husband away to war- the war completely accelerated in response to that day.

Pride because I joined many, many wives before me who released their husbands to the care of the Almighty, as their only protection from the danger they would surely face. I was so proud that Joel joined, knowing that the question was "when" he would deploy, not "if".

My generation was welcomed into the ranks of the war generations: Vietnam, Korea, the World Wars,the Civil and Revolutionary Wars, and so many more. There are differences, to be certain, but also so many similarities. Fear, anger, but mixed with pride, and a much greater realization that the Lord was (and always has been) totally in control.

This was, and always will be a defining event in our history. To personally experience that day was almost unbelievable. We will never be able to forget. And I, for one, don't want to.
Contemplated by Clare at 8:43 PM