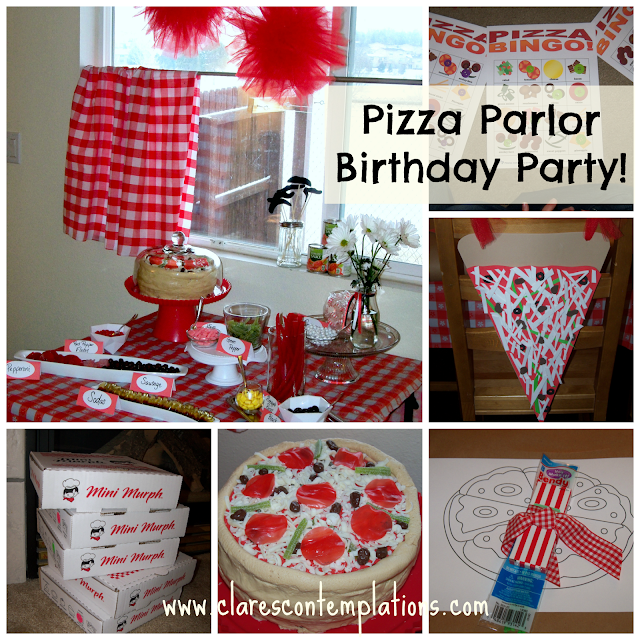 Josie turned 8 in November. Right before Thanksgiving. Which (seemed to me) was right on top of Christmas. And in the midst of Christmas, I decided to save her little party to share with you during the somewhat boring, much more laid back month of January!

Our kids don't have a "real" party every year. We are on a rough every-other-year schedule, and this year it was Josie's turn for a party. She is not an out-of-the-box thinker when it comes to party themes (She suggested two other themes we had already done, and also Chuck E. Cheese, which I put the kibbosh on due to cost.) so I supplied some inspiration. She selected this pizza party theme from the choices I offered her.

I had not had an opportunity to throw her an all-out, make decorations, plan games, coordinate food party, and I was very excited about this one! It turned out better than I had hoped-which is rare. Josie absolutely loved it, and that is definitely the most important part! 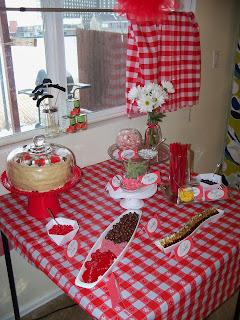 My personal favorite part was the candy buffet- which had a special twist. I only choose candy that looked like pizza toppings! Each guest filled a bag as part of their favor, and the girls loved it. 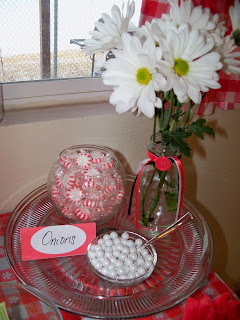 I purchased white Sixlets (Walmart) as "onions". I also provided classic Starlight mints- for that onion breath! I employed my tried and true technique of filling a variety of white dishes and glass containers. The tiny spoons are from the Dollar Tree. 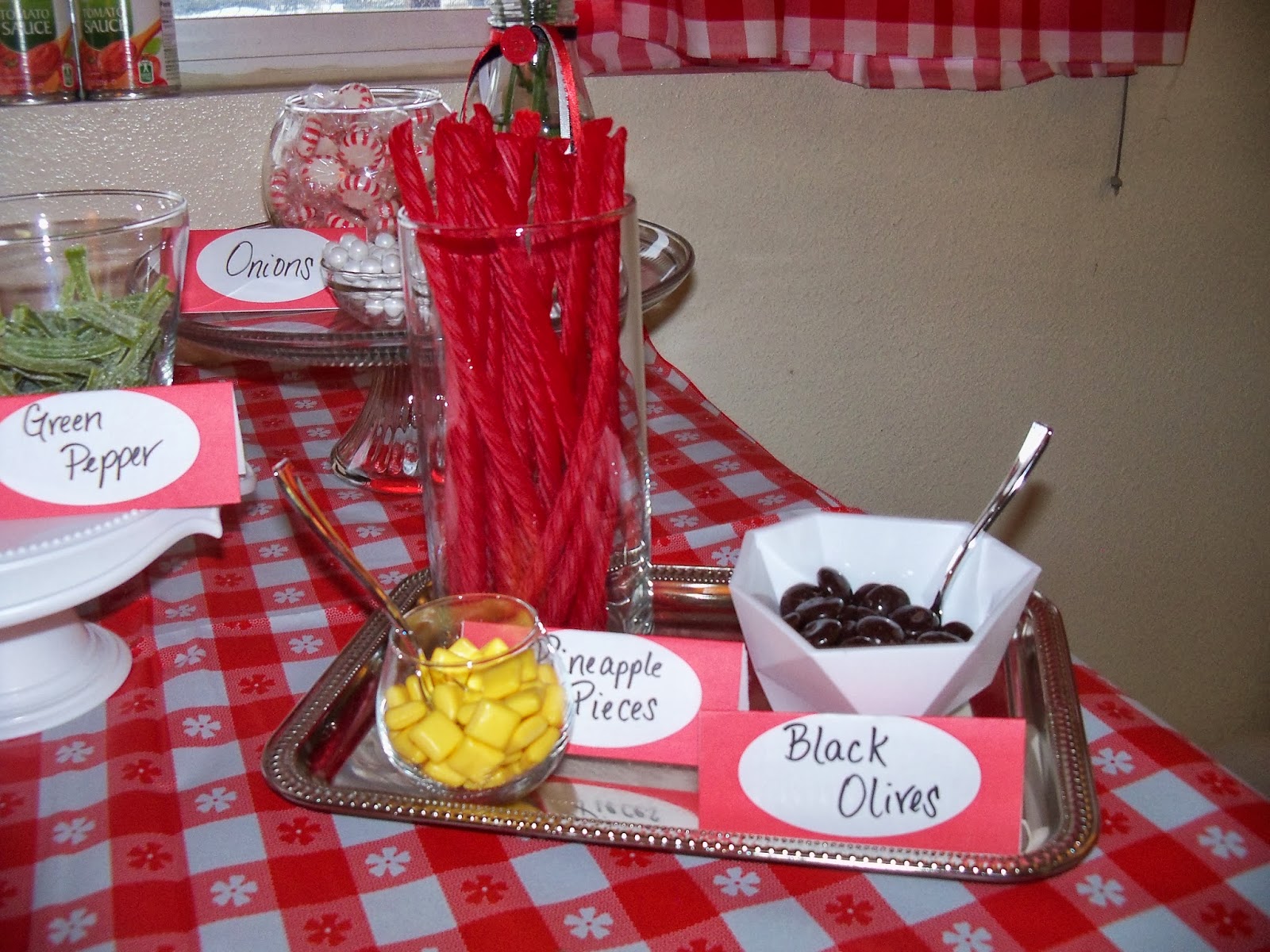 Junior mints were "olives" (most black candy is black licorice flavored-yuck!) I divided the new Starburst Minis (they come in a pouch-Walmart) into colors- the yellow were "pineapple pieces"-I should have said "bits"! I made the label cards in Picmonkey-they weren't perfect, but they worked. The red licorice was just to add height-and also because I love Red Vines! 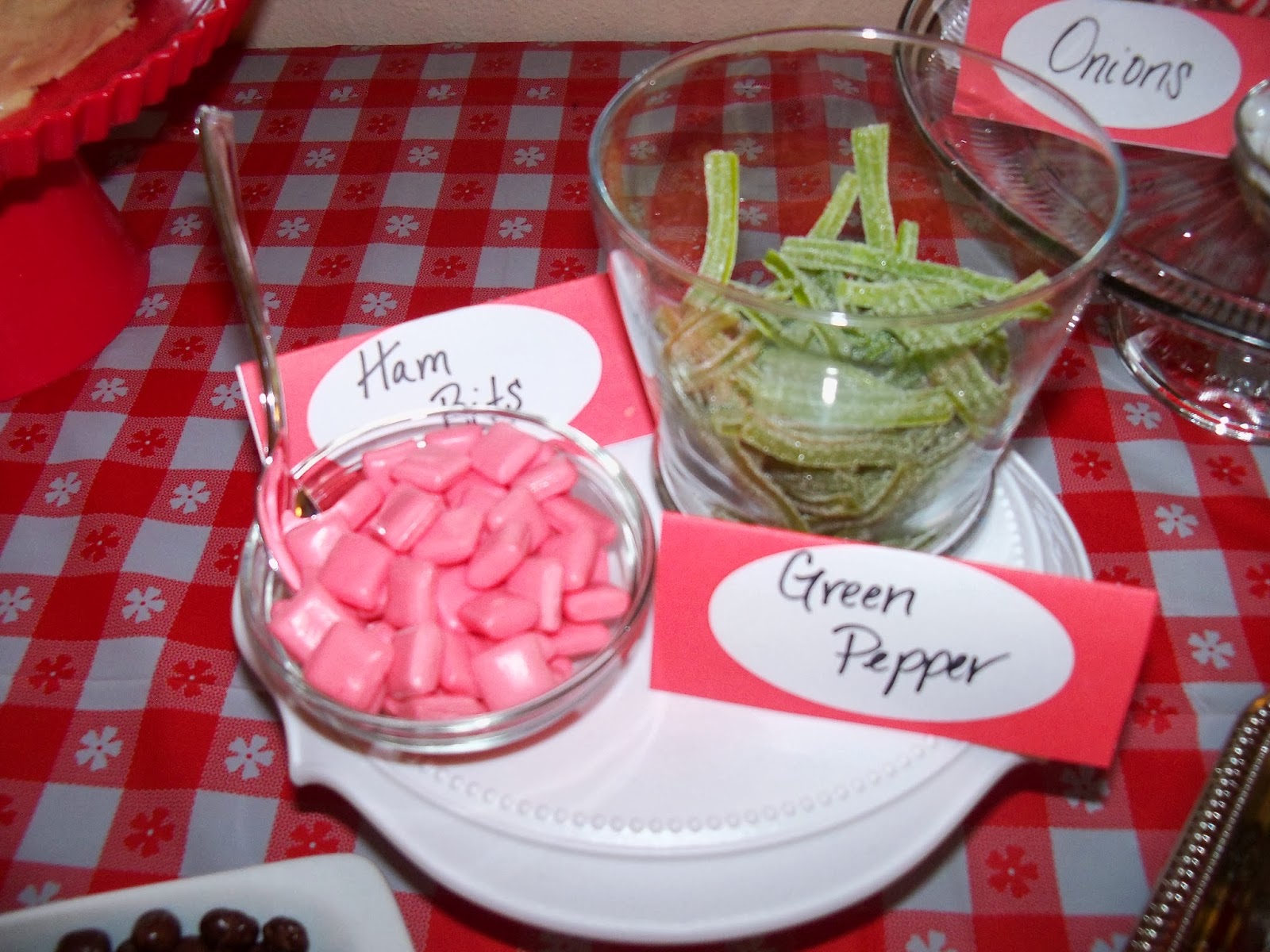 The "ham bits" are the pink Starburst minis. The "green pepper" is Rips sour candy strips. I used kitchen shears to cut them into thinner pieces. 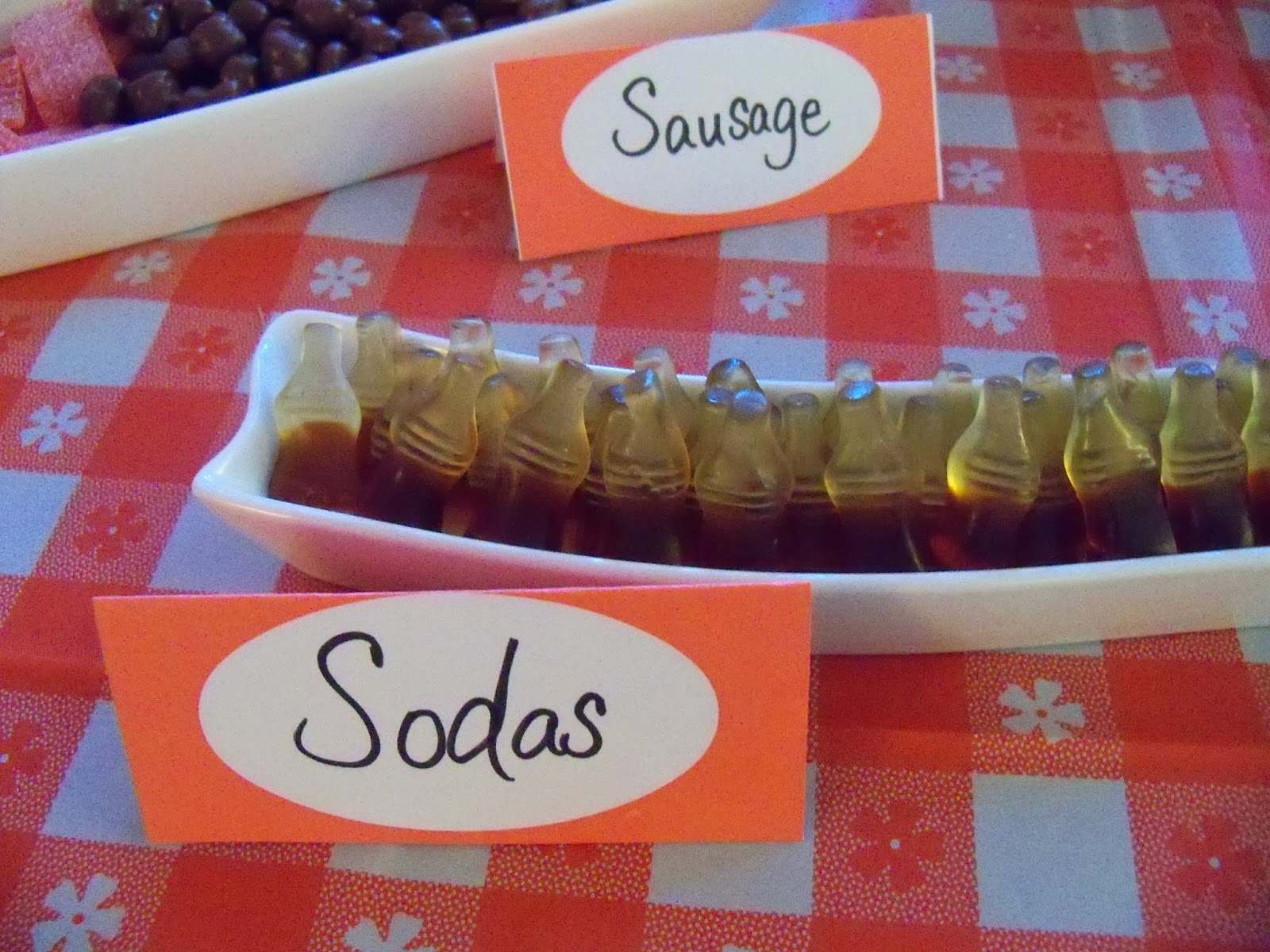 You can barely see the "sausage"- a combination of Raisinettes and Cookie Dough Bites (Walmart). Haribo Cola Gummies were obviously soda (World Market)! I lined them up in an olive dish. I didn't get a good photo, but red Rips sour strips were "pepperoni" and also red licorice wheels (World Market).  Not pictured: I had Red Hots as "red pepper flakes". 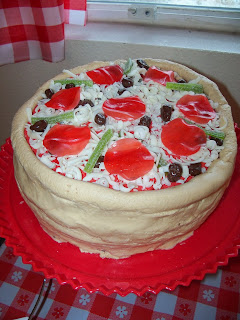 The centerpiece of the party was the deep dish pizza cake! I was so proud of myself for making this, I am by no means a cake decorator. It is a double layer chocolate cake that I frosted with peanut butter frosting. I used canned vanilla frosting and added peanut butter until it was super think and almost moldable. I pressed it around the sides of the cake, and made sure that I piped a thick round layer around the edge for the "crust". I added red icing tint to more vanilla frosting for the "sauce". My favorite part: the cheese! It is grated white candy melt- I softened it a little in the microwave, and then grated it with my cheese grater. It worked perfectly-and I sprinkled it on just like cheese. The pepperoni is strawberry Fruit Roll-Ups, the sausage is Raisinettes, and the bell pepper is Rips sour strips. 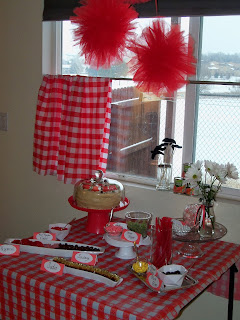 I placed a spring tension rod in my window (actually Joel did) and threw two pieces of red gingham fabric over them. I literally bought two yards at Walmart, and cut it in half. No sewing *at all*! Just my style. I stuck fuzzy mustache stickers (the Dollar Tree) on wooden skewers for the girls to have "chef mustaches". They made for cute photo props. I made the tulle pom-poms using this tutorial. They took a ton of tulle, but it was worth it! 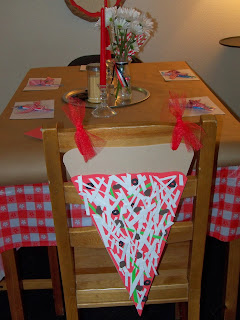 I made the giant pizza slice from foam. It wasn't perfect, but whatever. I bought the foam pieces at Hobby Lobby and freehanded it. I attached it with tulle to the Birthday Girl's chair. 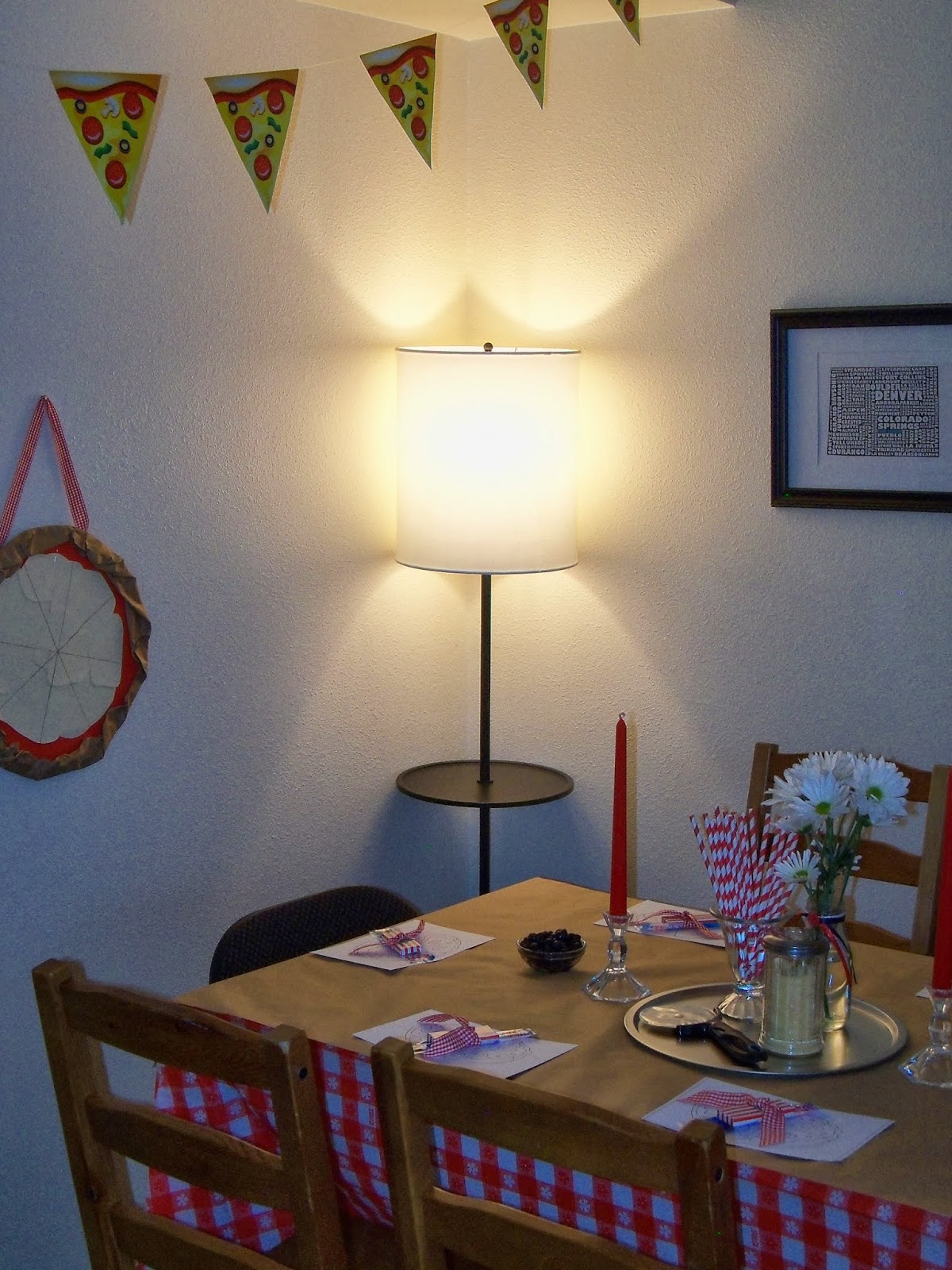 I used a pizza pan with a Parmesan shaker (both from the Dollar Tree) as a centerpiece. I used old Frappuchino bottles for the flowers (From this shower! I'm such a hoarder!). Josie also requested candles. It was a little tricky with such a small table, but the red tapers made her feel so grown-up. I covered the plastic red gingham table with brown wrapping paper (the Dollar Tree). I also filled a sundae glass with red striped paper straws, for the bottled rootbeer we served! 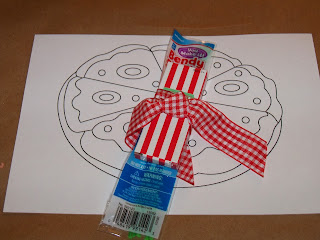 Each girl had a four pack of crayons (Target Valentine clearance, but you can get them at the party store.) and some "Bendy Sticks" (Party City-$0.10!) with these cute pizza coloring sheets at her place. Kind of a twist on restaurant "place-mats". They had fun playing with them while they were waiting on their server! 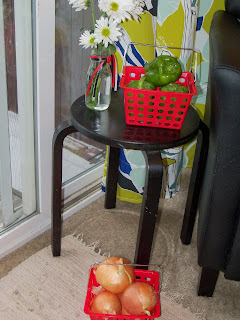 I decorated the rest of the living room with more flowers, cans of tomato sauce, and I filled red baskets from the Dollar Tree with fresh onions and bell peppers. They added nice spots of color. 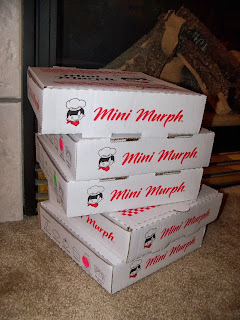 The highlight of the party was that each girl got to make their own pizza. I bought "Mini Murphs" from Papa Murphy's- they were perfect! At $3 each, every girl got all the fixings (sauce, crust, pepperonis and cheese) for an individual sized pizza. They loved the cute little pizza boxes, and they were perfect for the left-overs. 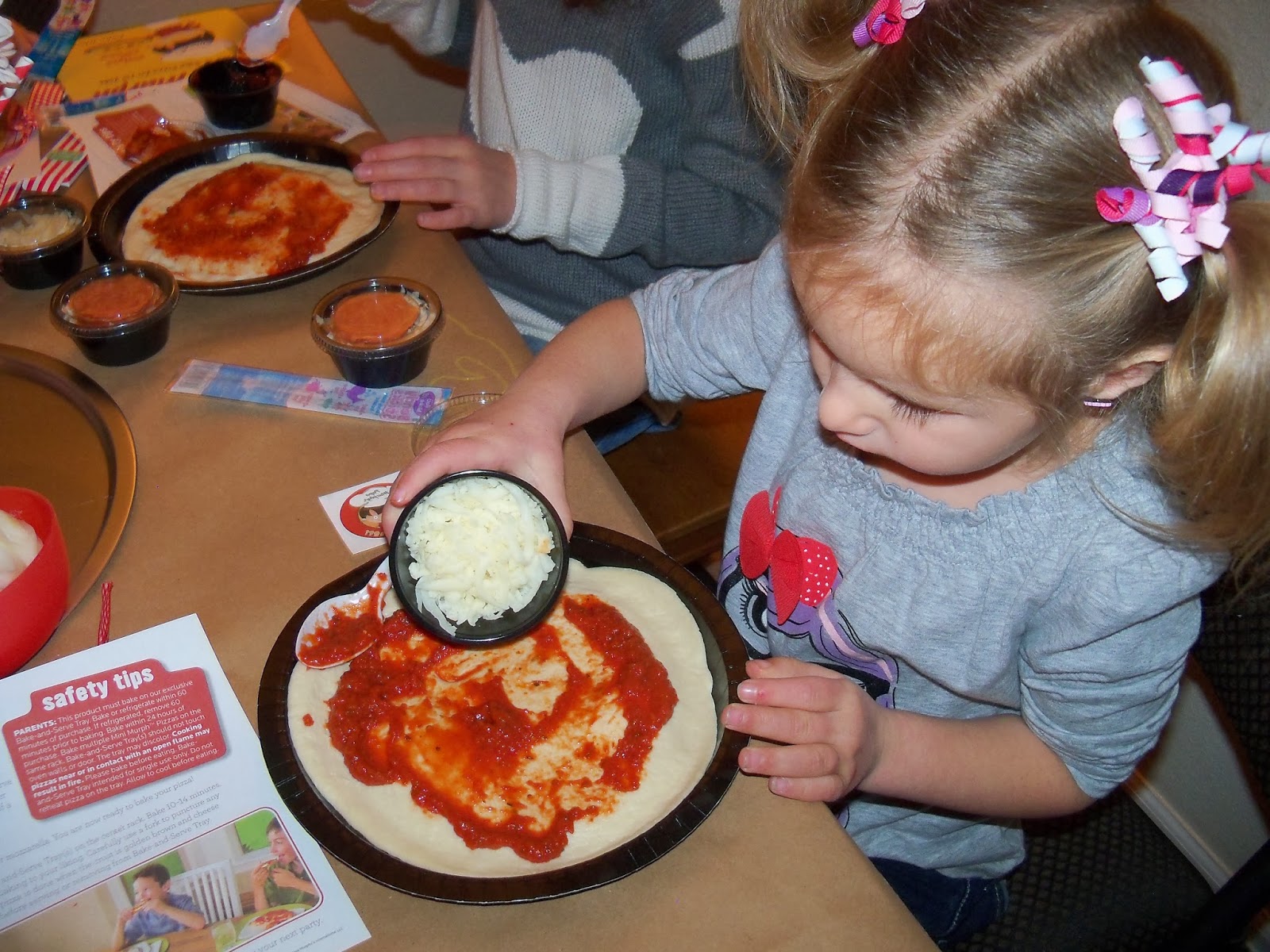 It was so easy for them to make their own pizzas. It was also dual-purposed. I didn't have to make dinner and it was a fun party activity! While the pizzas were baking (they only took about 15 minutes) we played some party games. 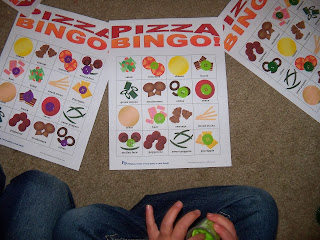 I got these terrific "pizza" bingo cards from here. I gave the girls buttons to use as card markers. I had prizes of nail polish and mustache erasers-that I forgot to take photos of! 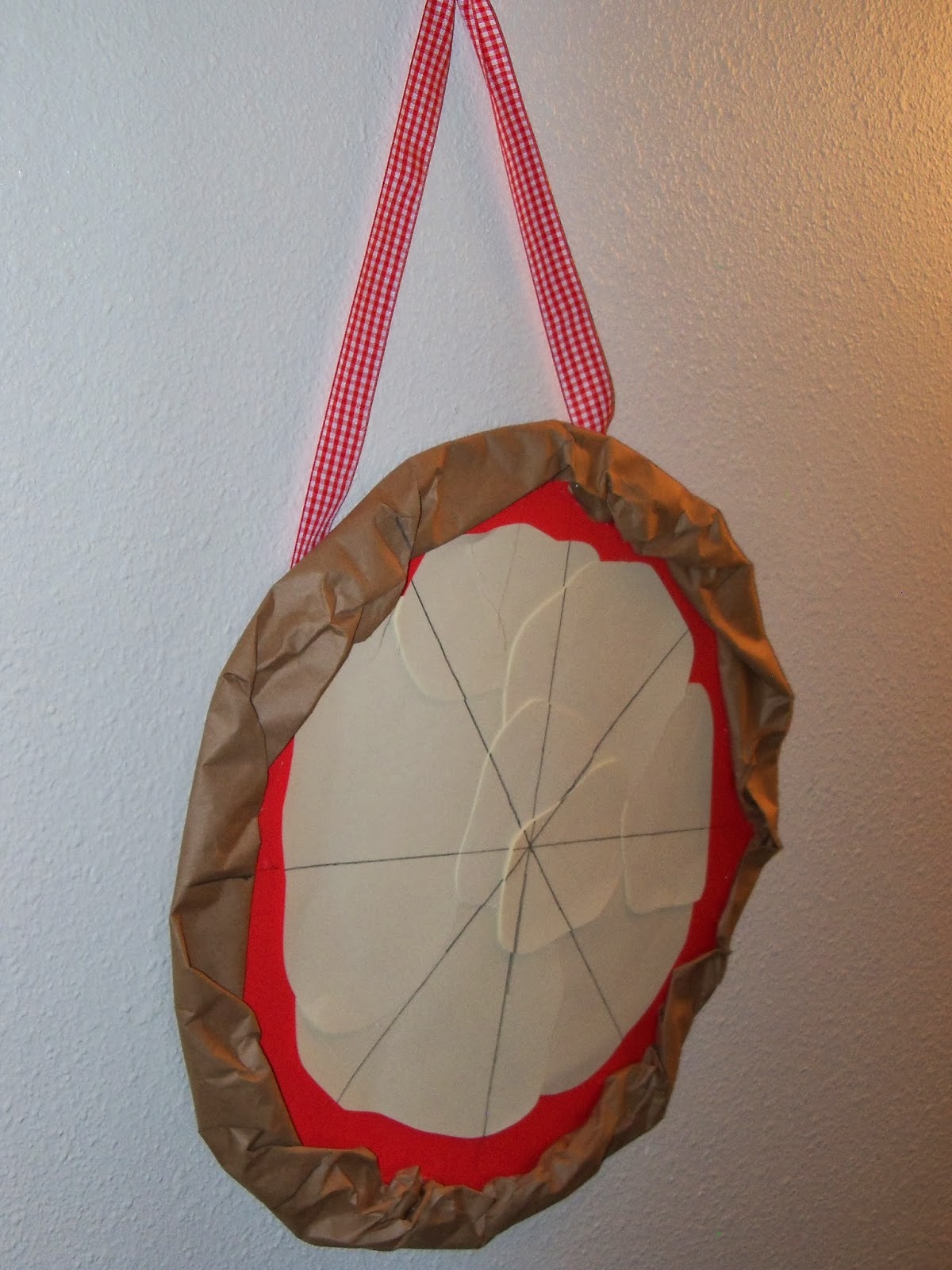 For the "pin the pepperoni on the pizza" game, I cut a circle out of red poster board and used brown wrapping paper to create a crust. I cut light cream construction paper for mozzarella. I divided the board into eighths and the girls got points for where they put their foam pepperonis. (I cut those out easily with my circle punch!) 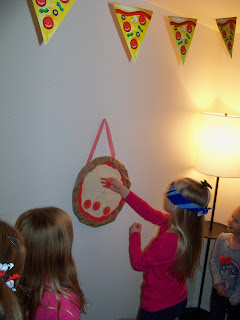 I ordered the pizza slice banner from Oriental Trading. The girls got points in the game based on where they placed their pepperonis. 1 point on the lines, 2 points all the way in a slice, and three for right in the center. The girl with the most points are putting up three pepperonis won!

The birthday girl gave us a great big cheesy grin over her cake! It was a magnificent ton of sugar. 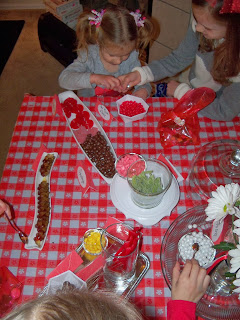 To go with even more sugar! The girls actually took their candy home with their favors-which I also forgot a photo of! I bought these cute pizza sticker sheets, pizza gummy candies (from Hobby Lobby-special thanks to my sister, Robyn for finding them!) and soda flavored lip balms (from Walmart).

I loved this party! It was such a great theme for games, food and decoration. I was a little nervous about bringing my vision to life, especially since so many of the parties I had seen online had professionally made paper goods, and were put together by paid planners. In the end though, it came together, and the birthday girl declared it her best party yet!

Contemplated by Clare at 8:02 PM